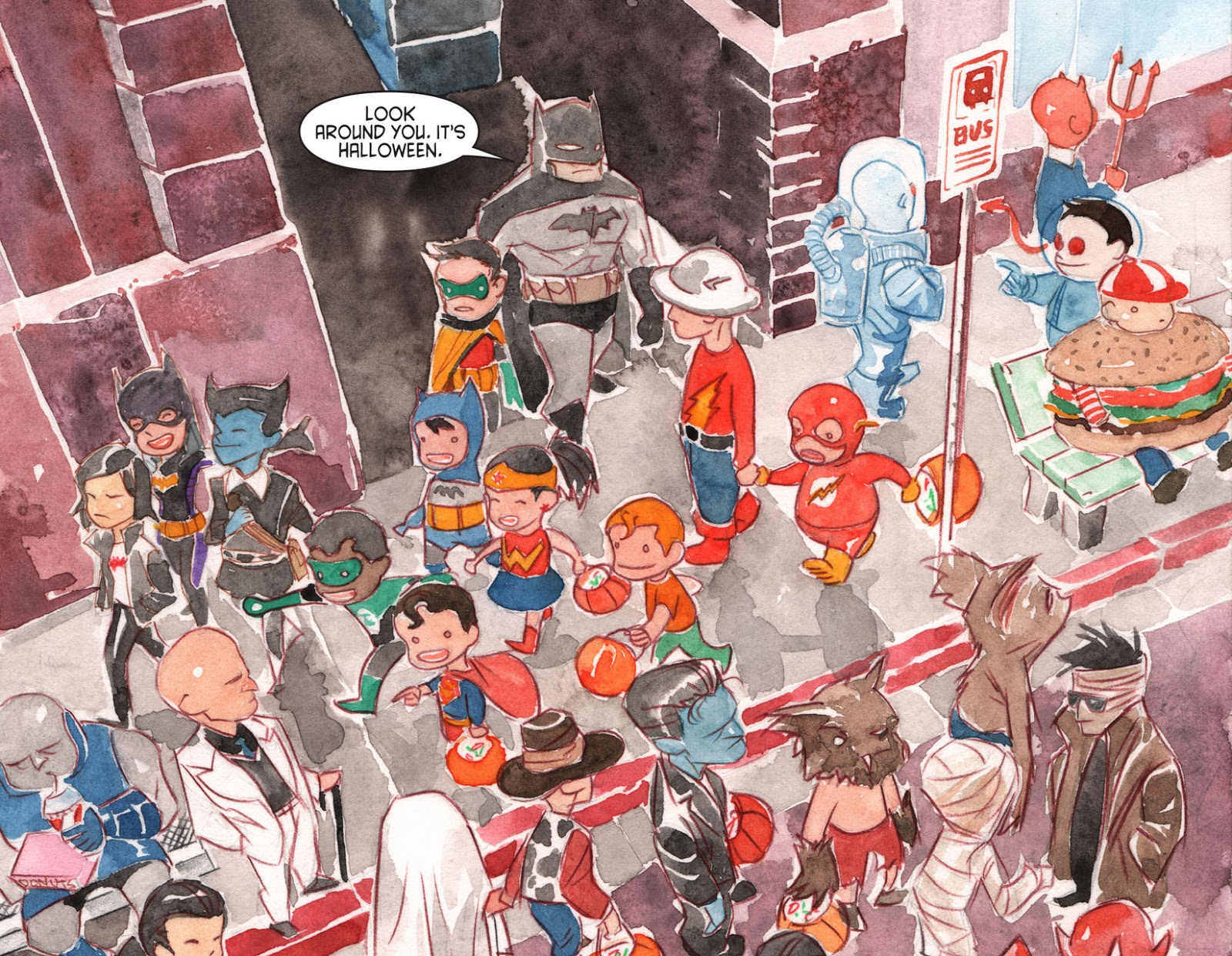 Here I am, trying to figure out a way to properly open the Batcave for Halloween, when I realize there is no need to go beyond our usual themes to get there. People dressed up in costumes, hanging out in a cave, going out at night to trick or– well, to fight crime and reinforce justice. Bats and black Cats and spider webs (this one goes to Spyral). We are a three hundred and sixty-five day Halloween party, folks. I myself am using it as an excuse to go re-read Lil’ Gotham #1, by Derek Fridolfs and Dustin Nguyen, in which Damian is confused by the whole concept of people dressed up as villains going around on the streets. We are precisely one month away from the release of the second Rebirth Annual. The issue, which according to TOM KING will not be diverging from the main storyline, will be composed of thirty pages by Lee Weeks plus 8 pages by Michael Lark.

In the meantime, we can check some of WEEKS’ panels for the issue, including Alfred, butler extraordinaire, and the Cat teasing the Bat, and right in front of his parents’ eyes. What a scandal. As far as complicated, hard to define relationships go, we can expect to see some more Damian and Dick interacting on Batman #34, to come out this week. Last week TONY S DANIEL shared an upcoming variant cover for Batman #35, which when including all of the issues of Batman published, is the eight hundredth issue. That’s right, eight hundred. He shared both uncolored and final version, with colors by Tomeu Morey. That issue will go on sale in a couple of weeks.

The day has come for us to finally see Marini’s take on the Bat! Well, nearly there. Batman: The Dark Prince Charming is due to come out this Wednesday, November 1. Enrico will be attending the Paris Games Week where he will not only be signing copies of his book, but also selling 10 special copies with sketches by him on the inside cover. They are beautiful white-on-black sketches of Harley, Joker, and Batman. As for volume two, Marini continues to share some videos of his inking process as he works on the book. Last week’s videos include one of Batman with Catwoman and another of Batman in action. This time it is all about the D. Not that D. Not the other one either. We’re talking about Dream of the Endless, or Daniel for friends. His role will become more prominent in issues to come, as we can see from this panel CAPULLO shared last week, showing aged versions of Superman and Batman being guided by Dream through some sort of dark fog – the Xs in the drawing are a code for inkers to throw black in those regions, so this is a very dark panel indeed.

The bald mage is back! Grant Morrison will be joining Scott Snyder, James Tynion and Joshua Williamson for the one-shot The Wild Hunt. I think I’ve never come across a better idea than putting Morrison behind a book featuring Detective Chimp and Raven. The man himself has proclaimed that it will be “Kozmik riders on the storm”, I’d wager in reference to The Doors. Taking from this panel by CHRIS WILDGOOSE, Nightwing might be getting into some trouble in the upcoming Batgirl issues.

HUMPHRIES made some further comments on his run on Nightwing last week, saying that Blüdhaven will remain being his home, and that we will get to see how the city “has changed across three different eras. From whaling town to gambling capital.” He’s also declared “Who is Donna Troy” one of his top favorite Nightwing stories. For those not familiar with it, it came out in New Teen Titans #38 as a one-shot. Technically, Dick is still Robin for this one, but barely, since this comes right before the Judas Contract, when he takes on the Nightwing guise. The issue opens with one of the most beautifully crafted pages I’ve ever seen, from the one and only George Pérez. DEXTER SOY did it again. We all know Jason is haunted by his memories and his past, and that he is the one that, more than any other Robin, inherited the Hamlet syndrome of which Bruce suffers, but damn, to deliver not one, but two stunning Jason pieces in one single week is a bit of a low blow. Not only did he do his take on Under the Red Hood, but he also gave us existentialist, Hamlet Jason.

Watch out, there is an enormous pile of MARCIO TAKARA falling from the sky! Technically, it is falling from LA, but never mind that. The artist attended Stan Lee’s Los Angeles Comic Con and shared some the commissions he got during the con. He did a Super Sons piece, two Nightwings – one of him with his electric sticks, another one with a robin perched on his shoulder and my heart can’t take it -, and last but not least, Cassandra as Batgirl. Since we are now going through a very Catwoman filled age in Batman, nothing like some ALEX ROSS exquisite old school feline female to brighten our day.

And talking about exquisite. KEVIN WADA will probably be the death of me, I’m telling you now. This is the closest Dick ever got to being portrayed as yours truly headcanon image of him. This week we are having a very special Halloween guest as our Gothamite! ARIST DEYN is a comic artist and painter whose work ranges from fancy, to funny, to cartoonish. With a style that will often play with distortions in anatomy and some heavy influence from traditional fashion illustration, Arist’s work is stunning, with a portfolio that includes comic pages – like this Catwoman page with very dynamic panel layouts and incredible background depth -, along with beautiful paintings, like this Animated Series inspired Bat-Family (I guess we can say Selina is now part of the family?).

The one piece we’re having though is her Batgirl and Robin Halloween special. I dare you to keep a straight face with this stroke of genius of a concept. Arist’s work can be followed on Tumblr, Instagram, and Twitter, and the prints can be found on Inprnt.