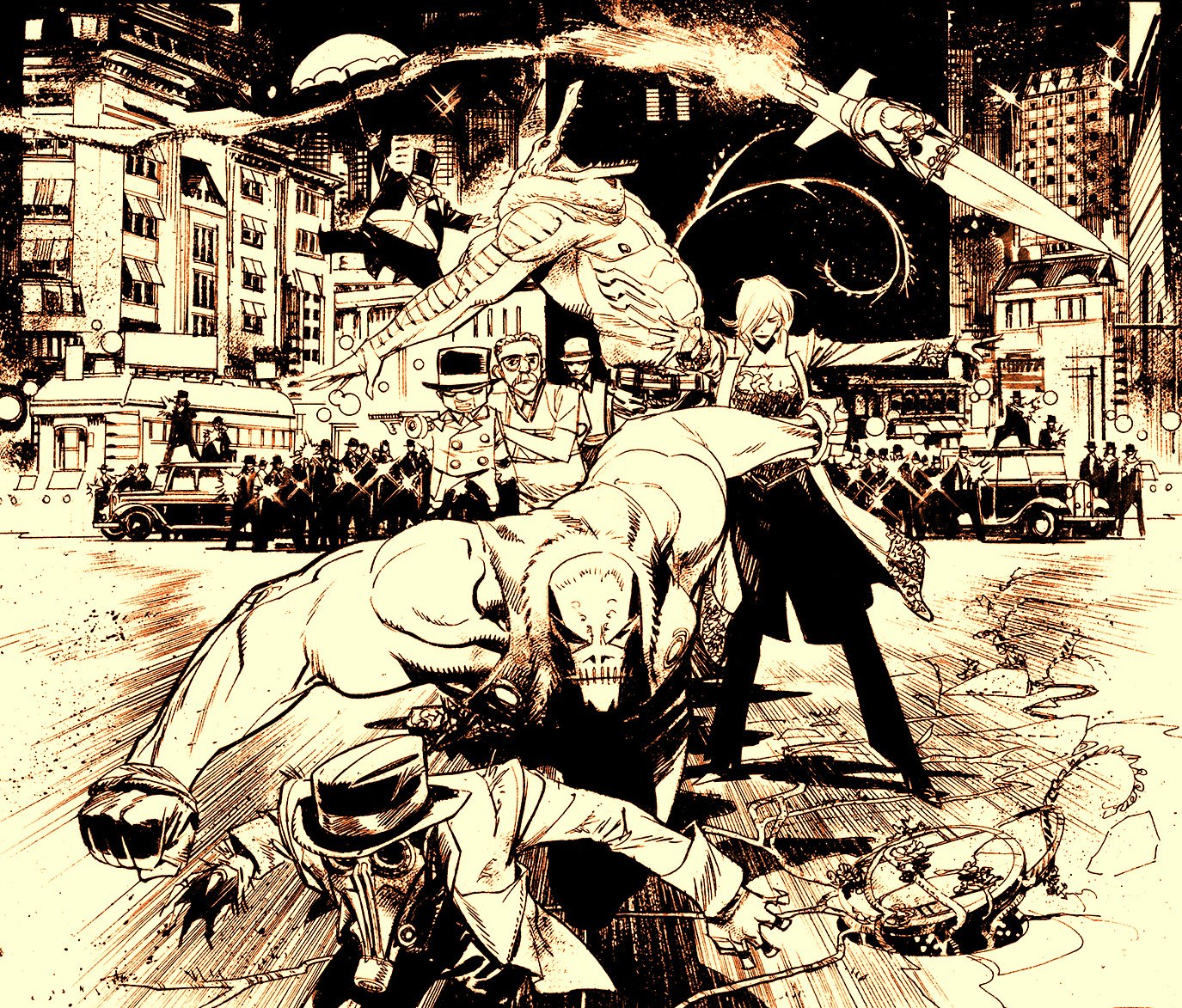 We are now officially entering the holiday season. Of course it is still early, but one can never prepare oneself early enough. We are the Bats, we prepare for every contingency, including holiday decorations. In fact, we are only seven Mondays away from Christmas, if you believe that. Oh 2017 where art thou?

DC, as usual, will release its Holiday Special a few weeks before the season hits full steam, on December 6, but we already get to take a first look at it. The Caped Crusader seems to share the stage with the Amazon on her special, on a story by Greg Rucka with art by the amazing BILQUIS EVELY. Also, the issue will mark the return of Denny O’Neil to the Batcave. We can’t wait to welcome him back! On related news, a Batman/Wonder Woman ongoing has been confirmed for 2018. The art will be in the hands of Liam Sharp, who worked on Wonder Woman at the beginning of Rebirth. No writer has been confirmed yet. DC seems to be wasting no time in establishing those two as the new World’s Finest, taking the cue from the Warner Bros. movies. We are two issues away from Superman coming to the pages of Batman. The arc will feature art by CLAY MANN, and we can get a glimpse of how great it is turning out. If you’ve read issue #2 of White Knight already you’ll be aware of the double Harley Quinn plot Murphy is building. He’s revealed on his Twitter the name of the second Harley, Marian Drews. He says her origin story will be told on issue #4, including how she became Harley.

And talking about Harley, Murphy used one of the pages from Harleen Quinzel’s origin story to mark how he uses composition to lead the eye of the reader through the panels. Before we go on to the next section, Murphy leaves us all with an amazing WIP showing most of his villains of choice gathered – how amazing is his Scarecrow? -, and a cryptic comment. Asked if the Bat-kids will team up with Jack, he said “He’d have to be really slick to do that. :)” Considering how slick his Joker already is, I’d say there is a chance we will be seeing it.

Gather ’round, there is a whole batch of Metal art coming our way! And this week we only get the freshest, juiciest of their kind, so prepare to be overwhelmed with great art. I for one would not expect to ever see Deathstroke riding a seahorse, accompanied by Aquaman.

And then we get some multiverse Supermen coming for elderly Batman. And that might or might not be Superboy Prime, I’m not placing any bets. From there we go to the Trinity itself, with aged Batman and Superman together on a Dark Multiverse adventure, and a Wonder Woman panel – Capullo is at this moment holding a poll for whether he and Snyder should do Wonder Woman or Swamp Thing after Metal is done, by the way. And, lastly, the Sandman standing is his library, bending space for all of the never-read books to fit. With Batman: Devastator having come out last week, we now only have The Batman Who Laughs and Batman: Lost ahead of us. The latter will be coming out this week, and it seems to feature “Grandpa Bruce”, as Snyder calls him.

BATS OUT OF HELL The second installment of Bats out of Hell just came out in Justice League #32.  The artist on the issue was Liam Sharp, and he shared some unlettered and uncolored pages that let us see the level of detail he put in those. INAKI MIRANDA, who will, together with Frank Tieri, be taking over the title after a long time of Conner, Palmiotti and Timms behind it, gave us a first look of his design for Harley. Last week we’ve got a beautiful Artemis shot from DEXTER, still uncolored and probably for an upcoming issue, since the art for this week’s issue is already finished. Taking from the preview of issue #16 the artist shared, it will be yet another wild one.

The release of Batman: Dark Prince Charming vol. 1 and Batman: White Knight #2 made this a laughter-filled week. Dreadful, gas-induced laughter. With both books directing their spotlights to Joker and Harley, nothing better than to have yet another quality take on the clown royalty of Gotham City. For that we have invited JASRIC to join us in the Batcave this week.

She is a young artist conciliating her hobbies with college (I feel you, sister) and, even so, delivering some amazingly beautiful digital paintings. Her tools of choice are Photoshop CS6 and a Wacom Cintiq 13HD tablet. I found her art through a Dick Grayson piece showing his evolution as Robin, Nightwing and Batman. But then I saw her full portfolio and holy skills, Batman.

I almost had to draw straws to choose one, but her classic Joker and Harley painting stood out and quite fit last week’s comics. I personally adore it for being one of the few times Harley’s smile creeped me out. Besides, her classic costume will always rank above the new iteration on my books. About her process, Jasric says that it took a while to find the perfect position for Harley. “I drew the Joker first and placed Harley on a separate layer so I could adjust the layout. In fact, my Photoshop file has the full body version of Harley because I kept moving her around.” The final layout did turn out great, with the classic triangular composition and their hands playing off each other, both moving with the same vector. She also says that the results were entirely unexpected, “because I changed the layout 3 times. I kept messing with it because I didn’t like the way it was turning out, but now it is one of my favorites.” It is so much of a great piece that she went and did the movie version of it.

Her full portfolio includes an enormous amount of DC – and especially Bats – related art, including the full Justice League from the Animated series, and Batman soaring over Gotham in an absolutely atmospheric painting. I could tattoo it on my forehead. I’m also not as funny as Joker.