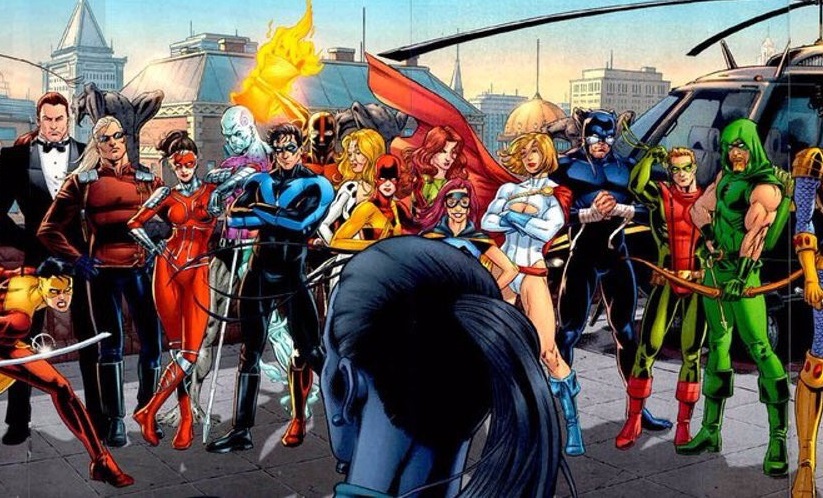 Did anyone bring candles? Do we even have enough candles? Should it be 77 candles, or is it like 20-something, or maybe 30-ish? Or maybe just one, just the same as when one vow was taken and a hurting boy became a hero? Last week we celebrated the birthday (actually, one of the many possible birthdays) of one little ray of yellow, red and green light that came into Bruce’s life at the ripe age of… 8, 12 or 15, your choice to make. I choose to go with Dark Victory, by TIM SALE and JEPH LOEB, the source for the page above.

Joining us for the festivities is CHRIS McKAY, director of the upcoming Nightwing movie, who kindly wished the boy acrobat a happy birthday. Oh, and also PATRICK GLEASON and PETER TOMASI, whose Batman & Robin omnibus has just come out. The first few issues still have Dick as Batman, back from before the New 52 hit, and all of the annuals. And our special guest, BRIAN MICHAEL BENDIS, who is moving over from Marvel to DC. Welcome, sir!

A Lonely Place of Living came to its conclusion last week, leaving a huge door open for the next arc, Fall of the Batmen. JAMES TYNION gave us a little bit of an insight into how his mind worked to build this enormous homage to Tim Drake. “It’s no secret that Tim Drake is my favorite character in the DC Universe, and in this, I wanted to tell a story that cut RIGHT to his heart and soul, and laid it bare to the world. Everything in DETECTIVE over the next six months starts HERE in this issue.”

Here is to a long Tynion run on the title, and long may DC pay him to “write all of this Tim Drake fan fiction.” Did you guys see the variant cover for issue #3? I sense we will be getting some Harley vs Harley action quite soon.

Did you all get your hands on the first volume of this beauty already? It was my first contact with Marini’s work, and I was left in awe of his skill as a storyteller. The second volume is only due to come out in 2018, but in the meantime we have a BatCat inking video by the artist to quell our thirst for more. For those unaware, SCOTT SNYDER is always slipping us some tease panels and pages even before the release of the official previews. With Metal #4 only two weeks away it is to be expected that we would get a couple of those, and so we get to see Wonder Woman taking a peek into someone’s mind – quite literally -, and Mr Sandman, casually and magically flipping through a blank book as Batman and Superman leap into it.

Where in the world is the Caped Crusader? Or should I say where in the Dark Multiverse? Batman: Lost came out last week and we got to see what is going on in Bruce’s mind while he is trapped in the darkness. JAMES TYNION, who wrote the issue together with Joshua Williamson and Scott Snyder, says that “This is the emotional heart of Metal, Barbatos’ dark argument against Bruce Wayne, and a literal journey through the farthest reaches of The Dark Multiverse. In it, we tie massive concepts together from Morrison and Snyder’s Bat-runs, and dial up the madness to the Nth Degree.”

So much Morrison-y my head imploded. I honestly went on a research frenzy the moment I read this issue.

Talk about the devil. Apparently, Morrison’s script for Wind Hunt is finished and has already found its way to Snyder, who is unashamed to come and scrub it in our anxious faces. Coming this week will be Fernando Blanco’s last Batwoman issue – for now. Picking the red mantle after him is SCOTT GODLEWSKI, who has been sharing some incredible panels from his upcoming issues, like tiny Batwoman in action, his take on Professor Pyg (am I the only one who loves fingerprint texturing? I can’t be the only one), and classic Bat-falling-from-the-sky Batwoman. I agree, Dexter. She totally would.

10 years ago, Gail Simone was saying goodbye to the Birds of Prey with issue #108. The pencils for the issue were done by NICOLA SCOTT, her first DC job. One of these days the artist came across the double-double-page spread (that’s 4 pages) she did for the issue, featuring everyone that had ever been part of the team. And she shared it on her Twitter. Just look at this beauty.

And since we’re in the Dick Grayson’s birthday mood, I would like to give a tip of the hat to Nicola for her #NightwingCasting back when the movie got announced, parental discretion advised if you search the hashtag. Got a few laughs out of me. Who am I kidding, I almost choked, I was so delighted. I love this woman and I don’t even know her. By the way, if you haven’t read it yet, go pick up her recent run on Wonder Woman with Greg Rucka. It’s not everyday we get Wonder Woman: Year One.

Since we are throwing a party for Dick Grayson, why not have a very special Gothamite. REBECCA MARKS, may all the blessings fall upon this woman, she went and did what my heart always ached for but my head never knew it needed. Those recurring panels where artists draw Dick Grayson acrobating his way around? Rebecca animated those. You were sent by the circus gods themselves, Rebecca.

The base panel for this one is by Eddy Barrows, from his Nightwing run. He probably did quite some research before getting this final result, because just look at this animation. This is the boy who never stands still in an eternally looping movement.

Rebecca, as it turns out, is a fellow Grayson fan. Me, being the curious cat I am, asked her why she holds Dick in such high regards. She says that, even though they get little attention outside of comics, she finds that “people who actually know anything about the Robins tend to gravitate more towards them than they do Bruce.” Not only is Dick’s story more interesting to her, she finds him to be more relatable. “Dick has the same moral code as Bruce, the same dedication to his cause, the same drive to help. But Dick is just…genuine, and personable, and bright. He has a magnetizing presence that attracts dozens of characters from all around the DCU to him. He doesn’t push people away constantly like Bruce does. And he helps give Bruce’s story far more depth and emotion in my opinion, too.” And if you hear some indiscernible shouting in the background, that’s just me expressing my agreement.

Rebecca’s work can be found on her Tumblr.