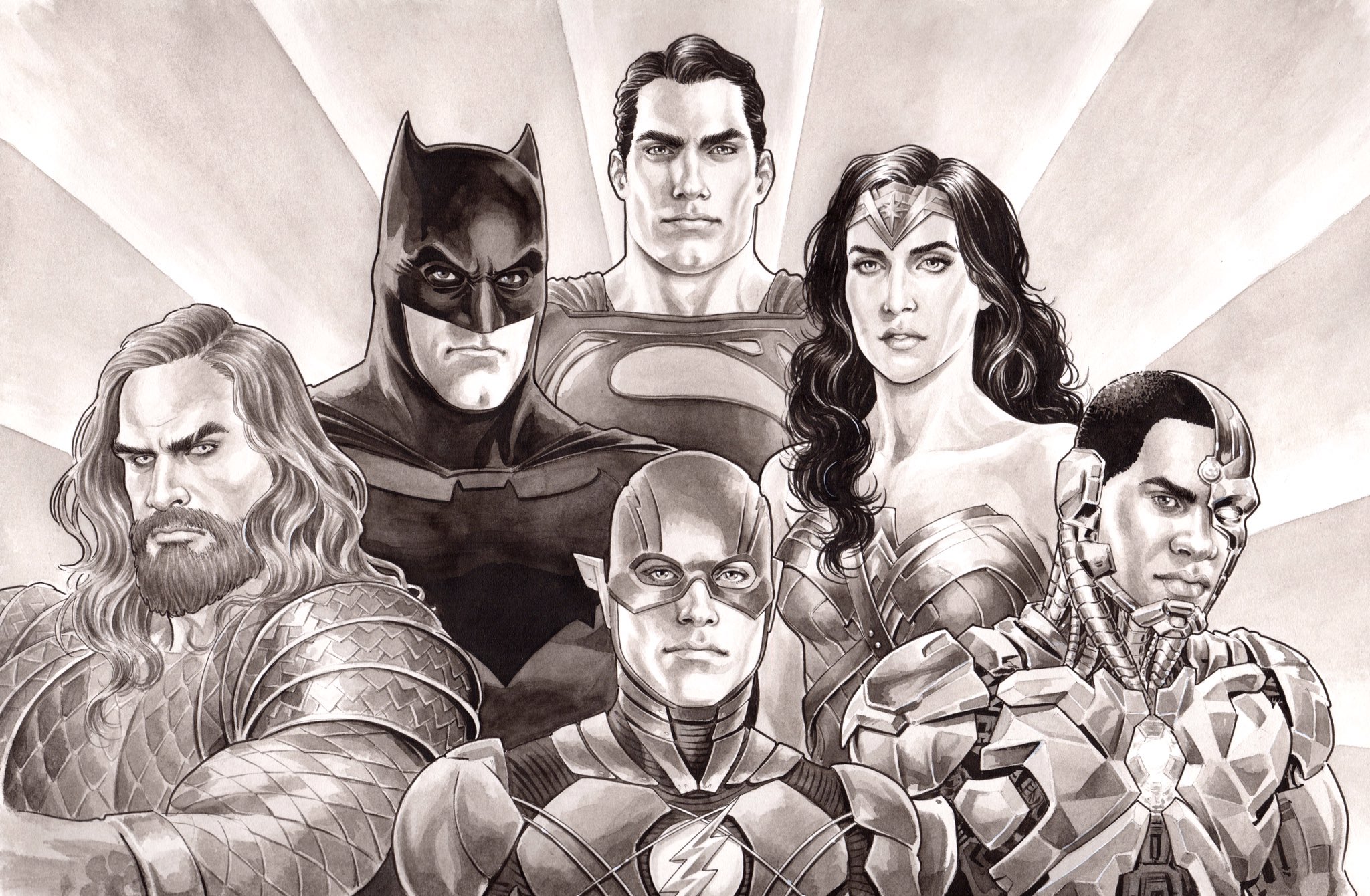 On this very special week, we are live streaming from the Watchtower! I believe that most people reading this have already watched Justice League at this point, and I believe most of you have had a great time with it. A number of artists have worked on special pieces for the release of the movie, and one of them is NICOLA SCOTT, who did a stunning prize piece for Roadshow. Yours truly has not watched it yet for a mountain of reasons. Or should I say, a Batcave of reasons. A certain sword fight in the last issue of Batman caused a bit of an uproar amongst fans. Who should have won, Catwoman or Talia? The noise got to TOM KING, who not only kindled the fire, he threw an entire bottle of alcohol into it. His words were “Loving the argument on my feed about who would win, Talia or Catwoman. Arguing about this kind of stuff provides a bit of relief from the heaviness of the everything these days; it’s one of the things comics do best. Also Catwoman would win. And she did! Come at me!”

I’m of the opinion that Talia should have picked her teeth with Catwoman in a swordfight, considering she is good enough a swordswoman to have been one of Damian’s tutors when he was younger.

Batman #35 also marked the last JOËLLE JONES issue. For the moment. She will be returning for issues #39 and #40, which will be featuring Wonder Woman. King also shared what seems to be one of the covers by Joëlle. Right after that, MIKEL JANIN will be back for a 9-issue long arc, starting with #41 and going all the way to #50.

Before we get there though, we still have issues #36 to #38, the Superman arc, drawn by CLAY MANN and colored by JORDIE BELLAIRE. It will involve balloons. Lots of balloons. The variant covers for Detective Comics have been in the capable hands of RAFAEL ALBUQUERQUE since the begining of Rebirth, and last week he shared a bit of what’s to come. The art for issue #970 is not so revealing, picturing Batman and Batwoman on motorcycles, but this little fellow for a yet undisclosed issue is a bit more of a tease. Mr. Drawing-monster CAPULLO is working full steam on Metal, and, as he drew his way through some frustratingly sticky paper, we got to witness incredible art being made. Like this spread of Elderly-Batman and Superman. And it seems that uncle Ollie is still stuck taking care of little brat Robin. I can’t even begin to describe my love for Damian’s Metal design. Some other art we got to see was Aquaman (as Capullo breathed a sigh of relief for going back to his usual paper), Elderly-Batman dealing with some… goo? The Batcave, and the Batman who Laughs with his little Robins. Oh, and Barbatos. Never forget Barbatos. So… The Batman who Laughs came out, the last of the one-shots to fit into this section of the Batcave. I won’t even dare commenting on this one, I’ll just use JAMES TYNION’s words: “I think THE BATMAN WHO LAUGHS is the darkest, most effed up comic book I have ever written. I am frankly stunned you all haven’t sent the men in white coats after me…“ In the words of SCOTT SNYDER, this is truly Batman’s worst fear come to life.

BATS OUT OF HELL Another section making its last stand here in the Batcave is the Bats out of Hell crossover. Justice League #33 came out last week, and artist TYLER KIRKHAM shared some of his incredibly intricate art for the issue.

THE BRAVE AND THE BOLD

A new Batman/Wonder Woman title had already been teased, but it is now confirmed to be in fact the revival of Brave and the Bold in a six-issue mini written and drawn by Liam Sharp. I would like to take a pause and say that a comic in which Bruce and Diana investigate the death of an Irish God – Neil Gaiman much – is dream material to this mythology enthusiast that here speaks.

Liam seems to be geeking out about his own project himself, saying that he is “Just so insanely thrilled about this! :-)” To draw a Celtic-themed comic has been a dream of his for his entire 31-year career, and “getting to do it with Diana – with some assistance from the Bat – is more than a dream come true.” He also shared some of his research material for writing the series, which has me itching to read Irish Sagas and Folk Tales. One of the questions raised was if Diana was not just swapping partners left and right, to what Liam answered that “Cernunnos asks Diana for help. Diana enlists Batman. It’s really a WW story first, Batman second. But I am LOVING drawing and writing Batman too.“ The artist shared two finished pieces he’s made for the series, and I might cry a little when this comes out. I mean, that’s Diana walking the Giant’s Causeway with a Celt God by her side, and I’m not sure I’m emotionally or physically healthy enough for this.

The last issue for the current Nightwing team is coming, and the guys are saying their goodbyes to the acrobat. This time it was CHRIS SOTOMAYOR’s turn. “Turned in my final issue of Nightwing. Bittersweet. I love the character and the experience was amazing! Definitely a career high point for me.” Jason Todd riding a rhino. Because why not? DEXTER SOY also finds it to be a valid concept, so he went and made a gif of it. He also found Pup Pup. I miss Pup Pup.

Coming next in the Batman Black & White collectible line is John Romita Jr.’s Batman, sculpted by PAUL HARDING. The statue is very close to its final steps before release, and the artist’s proofs are already in the hands of Harding. Our most frequent guest is back! This time, DUSTIN NGUYEN comes to us with an insanely expressive painting of Gotham’s most wanted. In our very special Justice League edition, I did a bit of self-indulging and reached out to KERRY CALLEN. I have known his Super Antics series for quite some time now, and I love his brand of humor. No better time to bring his work to the Batcave than now that we finally have a live action Justice League movie coming out. Take me back to the past and I would have gladly featured his cover swap between Batman and Superman at the time BvS came out. It was a tight match between Super Antics #11 and #9, but in the end I went for Diana having some trouble with her lasso. As I mentioned before, I’ve yet to see Justice League, but Kerry told us that “I’ve had a couple of people wonder if a scene from Justice League was inspired by that joke. I know my art makes the rounds on the internet, but I also know that joke wouldn’t be too hard for anyone to create from scratch.” Easy or not, it is brilliant nonetheless. His jokes work all the better for being coupled with the Golden Age version of the characters, usually seen as the paragons of morale and good behavior. About his choice for this period in comics, Kerry says that “There’s something about the golden age of comics that have a naive charm. That’s one reason I enjoy creating a vintage look with Super Antics. They’re also cruder than today’s comics and faster to draw. Ha ha.” And it is also hilarious to see Golden Age Superman pulling pranks on his comrades.

Kerry’s work can be followed on Twitter and his personal blog. He also has a web comic he is currently working on, Dirtnap, an “adventurous romp starring old-school, iconic monsters, but with un-iconic twists.” Go check it out!