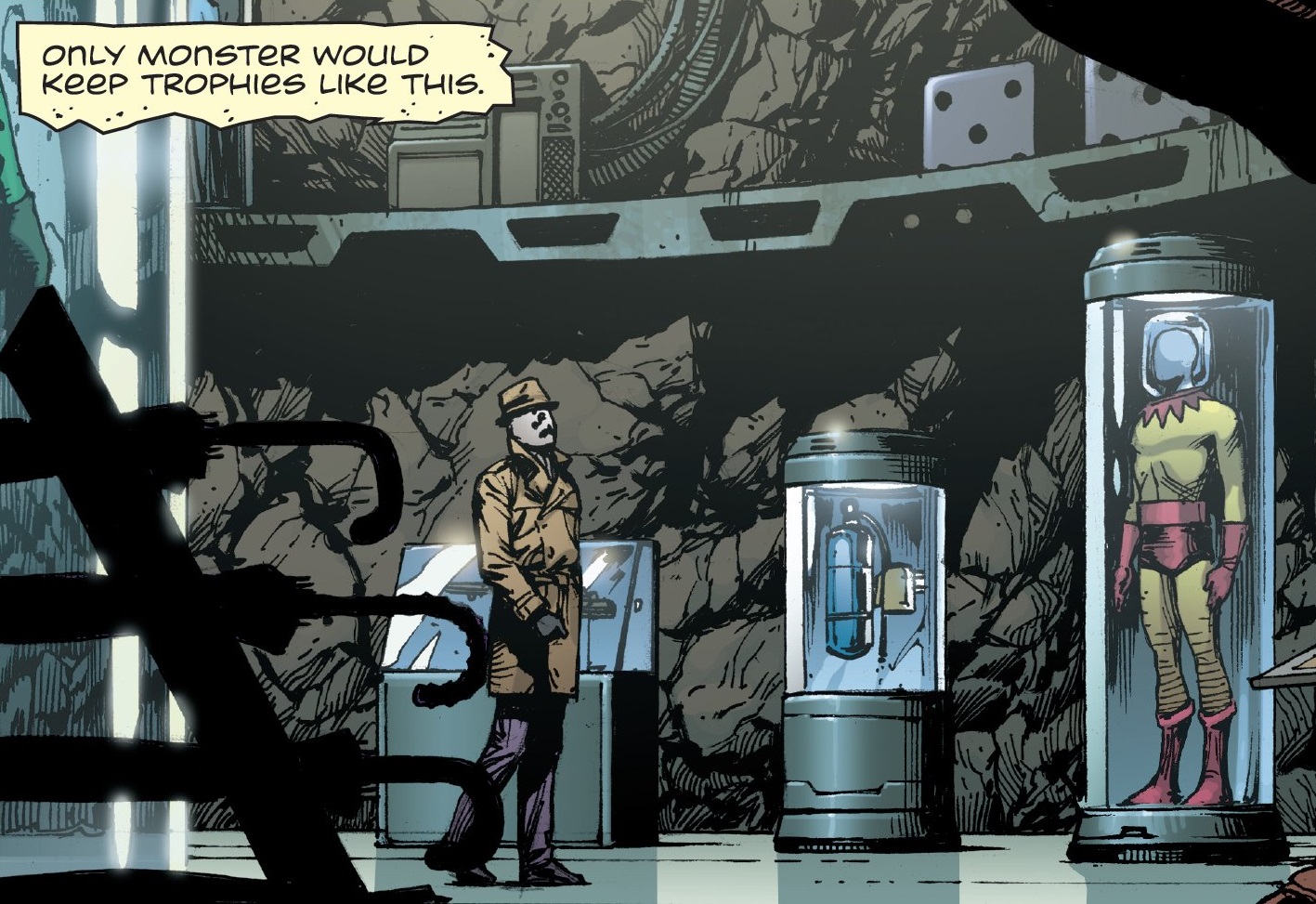 This week’s Batcave is a short one. Creators seem to have taken a break from the Bat – as they should. I’m the crazy one who is here, on Christmas Eve, writing a weekly wrap up. Maybe I’m a bit of a workaholic, maybe Barbatos infected me. So, from one bat to another, Happy Holidays! Does not really matter which holiday you celebrate, or even if you don’t celebrate any. December festivities are usually a time to gather loved ones and get buried in food. Food is good, we like food. And family as well, but mostly food.

I made a poor decision yesterday. Well, today, but you’re reading this tomorrow, so it was yesterday. We all read comics, so there should be no problem with understanding a time-stream mess, am I right? So, there I was, putting everything together for this weekly report, when I figured it would be a good idea to take a break and read the advance copy of Batman #38.

Then, I needed a break after my break. In the best way possible, if you like to get gut-punched by literature. I’m not the only one saying it, people have been coming to Tom King with the same kind of opinion. But then KING gave me an early Christmas gift with this lil’ screen cap of his and everything was alright again.

The man is a real-life Santa and he also brought us the gift of Bruce wearing a ridiculous armor, coming in issue #39 by JOËLLE JONES. I’m not the one saying it is ridiculous, I’m just quoting Selina here. Duke Thomas is SEAN MURPHY’s very own baby – he does have more than a few parents, but Murphy sure is one of them. It comes as no surprise therefore that the character would get a cover to call his own, coming in White Knight #6.

Hide your wife, hide your children, hide your damn dogs. This week, Rorschach is coming to the Batcave.

Talking about Christmas, Nightwing #35 hit shelves past week and Humphries and Chang threw a “Nightwing Before Christmas” signing party. Also marking the release, Humphries gave an interview to Comic Drake talking all things Grayson (you see, I always have to refrain from using his first name).  I have to say Humphries’ answer for the classic Which Lantern Would He Be question is right on point for the character. Also, props to Chris Conroy for coming up with the cross-training gym. And, to further enhance our hype (my hype?), CHANG shared his character sheets for the new run.

Between Teen Titans and the multiple Red Hood titles, Lobdell has been writing titles with the Robins for quite a while now, and not always receiving the best reviews. He recently gave an interview to Batman News where he tackles some of the issues that surfaced over the years, including editorial control and the current non-killing rule set for Jason. Quite an interesting read.

Batman. A Dark Knight, working in the shadows to avenge his parents’ death on a lonely crusade.

Or so people seem to believe. Guy has what is probably the biggest family in DC Comics. Considering we’re currently on a family mood, we’ve brought you some Bat-Fam goodness to warm your hearts. We’ve brought you Glynnis Koike.

Better known by the pen-name of INKYDANDY, Glynnis is one of the artists out there dedicating her time to making incredible fan art of the Bat-Fam. ALL of the Bat-Fam. Me, being a big Robin enthusiast, will be focusing on the boys here, but to scroll through her feed is to see some incredible pieces involving pretty much everyone. But then you ask me, what makes Inkydandy so special? Well, she seems to understand the inner workings of a family on a level that often seems to be lacking in some of the official DC material.

For example, late-night horror storytelling. Under a blanket. With a flashlight. And then someone trying to pull a prank and all hell breaking loose. People with big families have been there, done that. And bantering, lots of bantering. My weapon of choice for this holiday season though is a love letter to Jason Todd, The Red Hood of Gotham. Basically, the boys are helping him unpack when they come across his old paraphernalia (please do not miss Dick’s face holding that gun). And then they all decide that unpacking is no longer a priority, and Glynnis delivers this magic altercation. The boys come to life under her hands in a way that I cannot quite describe. They do not all look like some carbon copy of each other, both on their looks and their personalities. They just read like… real people, something that not all writers or artists are able to pull with superheroes.

More of Inkydandy’s goodness can be found in her portfolio, and her work can be followed on Tumblr, Instagram, and Twitter.