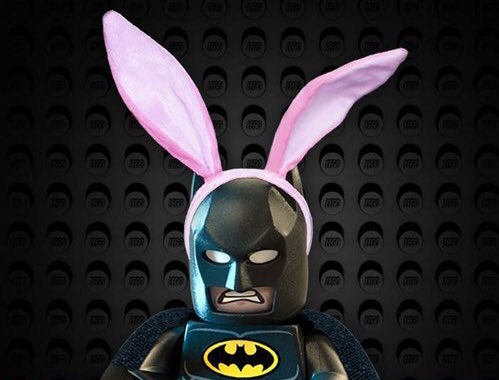 It seems we’ve had a bit of a bunny invasion here in the Batcave this weekend. Batman is here to wish a happy Easter for those who celebrate the holiday, and to pass them bunnies a message: the only rodent allowed in this cave is the flying, scary type. As we cover our faces with melted chocolate, let us appreciate the fact that Tom King has leaked this panel from Batman #21, The Button, as a treat for the holiday. Bless you, Tom, bless you.

Since this has been a slower week than the previous ones (which were frantic, let me tell you), I’ll use this space to ask all of you people standing in the shadows: are you missing any creator or artist on our list? If your favorite comic or favorite artist is not being covered, go ahead and let me know in the comments section. I promise I’ll use my sonar to locate them. Just keep in mind that this is the Batcave, not the Watchtower, so my power range is limited to darkness-dwelling creatures. With anticipation building up because of The Button and DC keeping it tightly under wraps, the few things related to Batman to come out this week were covers. While FABOK  shared a compilation of all of issue #21’s covers – lenticular cover included -, King went ahead and shared what might be JANIN’s cover for issue #22 (seen above). Take a closer look and you’ll see that reflected in that pool of blood are the Flashpoint versions of Batman and the Flash. Rumors have been flying around about Thomas Wayne Batman making an appearance in The Button, and this further confirms it. As I said, this was a quiet week in the cave. From Detective, all we had was TAKARA’s original art for this week’s issue and TYNION hinting at reintroducing a 90’s character. My guess is Anarky. SNYDER has confirmed that All-Star will not go on hiatus during the Metal run, and FIUMARA has shared his variant for issue #10. I wonder who might be that woman holding a knife to Batman’s throat.

Up until this week, CAPULLO had been working on Reborn, his Image project with Mark Millar. He has officially finished it (I haven’t read it, but the characters look interesting from the illustrations he has shared while working on the final pages), and now he and SNYDER are working on designs for Metal.

It got Snyder so excited that he has actually put together a Spotify playlist titled DC: Metal. It obviously features a lot of metal. I listened to it out of curiosity on his taste in metal, but my metal won’t make a great alloy with his.

Trivia time! Did you know Jim Lee was starting his studies to become a doctor when he decided that his thing was art? No wonder his human figures are so anatomically accurate (if you’ve ever seen one of his drawing panels at Cons you know what I’m talking about), guy knows what he is doing. It seems that HOPE LARSON has been feeling overworked for a while now, and this week she announced her decision to move back no North Carolina to be able to settle down a bit. In a very long thread on Twitter, she gave us her thoughts and reasons for doing so, and among them is this piece:

“I genuinely love the corporate work I’ve done and am still doing. But it can’t sustain me creatively. There has to be room for more.”

While this is not her saying that she will be leaving Batgirl, working for DC might be one of the things that put her under so much weight.

I can imagine Hope feeling a bit like Barbara in the panel above by WILDGOOSE, work engulfing her from all sides. Let up hope she can kick all of that stress on the butt and end up on the winning side! Whether you like the storyline or not, Dark Knight III: The Master Race has been bringing to the world some beautiful cover art – we all know that part of it is just so that they can snatch more of our money, but who cares, give me all of them. Last week we had Lee Bermejo’s piece, and this week we are having BILL SIENKIEWICZ’S  as cover for our Honorary Members. But let me tell you, this was a near draw with yet another throwback Justice League shot by the eternal ALEX ROSS.

Continuing the trend of me covering my favorite artists (because they are amazing, that’s why), this Two-Face by DUSTIN NGUYEN will make you do a double take because of how great it looks. I do am a sucker for watercolors.

TONY DANIEL is still on his trend of sharing some originals from his time drawing Batman, including this three-camera piece of the Joker and a Dick Grayson Robin commission from 2015.