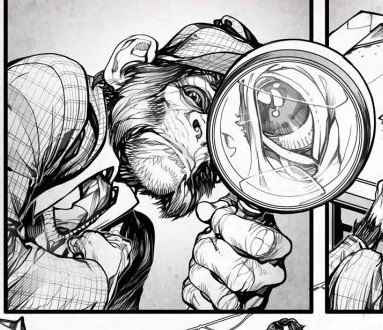 Welcome to our weekly coverage on the world of comics, and I would be blind as the proverbial bat to try to make this about Gotham. This round goes to the Metropolis team, because the red trunks/shorts/briefs/speedos are coming back! Underwear over the pants! Whatever you want to call them! This cover by JIM LEE will be stamping the front of Action Comics #1000. The milestone issue will be coming out this April, and who cares that Brian Bendis will be working with Jim Lee on his debut story for DC when the trunks are returning. The issue will also be featuring some never-before-seen art by Curt Swan, with Marv Wolfman scripting a story based on it. Oh, and they are bringing Richard Donner as well. You know the guy, the director of THAT Superman from 1978. Other names working on the project are Geoff Johns with Olivier Coipel, Paul Dini with José Luis García-López, Tom King with Clay Mann and Jordie Bellaire, Scott Snyder with Tim Sale, Peter J. Tomasi with Pat Gleason, and Dan Jurgens. This is not only going to be incredible to read, but it is a witnessing of the history of arts being written.

The celebration is coming right after DC’s 2017 success got recognized by comic retailers in the US. As reported by Comics Beat, the publisher took 7 Gem Awards. DC was chosen as 2017’s Publisher and Backlist Publisher, and also scored 5 Comics of the Year: Batman#24 as Under #3.99, Doomsday Clock #1 as Over #3.99, Super Hero Girls vol. 4 as All Ages Graphic Novel, Batman TMNT vol. 1 as Licensed Trade Paperback, and Wonder Woman Earth 1 as Graphic Novel. The Collectible Statue of the Year also went to DC Collectibles, with Joker by Brian Bolland.

I woke up one of these days with a resolution in mind: not getting involved in the drama around Batman #39. I’m breaking my promise to write this article, but let us try to keep things drama-less. It all started with people accusing King of plagiarism, which probably drove his anxiety to the moon and back since he apparently had never read the issue in question, Action Comics #761. You don’t even have to be a fiction writer, anyone who’s gone through academic learning will probably identify with his reaction on the matter.

And then, the issue came out and people were less-than-happy with a number of things, as they will. Tom, being the utter, absolute, raised-by-Alfred-himself gentleman he is, addressed the situation in the best way possible. His tweet reads “Gotten a lot of feedback on Batman 39. Just want you all to know I hear what you’re saying, I respect it, and I appreciate it. Your passion for these characters and these books is inspiring and humbling. You’re forever teaching me how to be a better writer. Thank you.” JAVIER FERNANDEZ seems to be very excited about drawing Batwoman. Can’t blame him, I would too. He also shared an amazing piece he did of Batman in Paris. It did fool me into thinking that this was a scene for Detective Comics for all of 1 minute.

This is not exactly news, but it did get a very good, sad laugh out of me. Apparently, Busiek got the pleasure of reading a review of Creature of the Night #1 that said “it was too much like the Silver Age origin of Batman in DETECTIVE COMICS 1.” This is a “Find the 7 Errors,” now go!

You bats out there, please do your research whenever writing any opinion piece, I beg you. There is nothing wrong in making mistakes when having an informal conversation, but to publish a criticism basing your argument in wrong, unchecked information is just not okay.

Murphy just put together a White Knight FAQ. He says that DC gave him full creative control on the project, only editing swearing and nudity. He has commented on his wish to put those back in a mature-rated trade, and says: “I mostly collect European comics, where nudity isn’t a big deal. So I envisioned BWK in that way, hoping it would be ok.“ About the use of the news-anchors, he’s chosen that approach as a way to have people discussing their different opinions on page. He also says he had no idea if he would ever get to work on a similar project, so he crammed it all in one go, what can make the book read as a bit overwhelming.

There are a couple of big reveals though: Murphy not only has plans for a second volume, he also has plans for a THIRD volume. Also, he says that he changed the Robin timeline at first as a way to have someone significant dying in the story. “At first I didn’t plan on using Todd. But I had a flashback where someone needed to die, so I decided to throw the Todd thing in as an Easter Egg. I didn’t know readers would react so much to that.” Though it began as an Easter egg, the Todd timeline is now part of the story, as Murphy “tweaked the script to make it fit better.”

Oh, and about a movie? It’s already been discussed, but “some at Warner are hesitant about a ‘Batman political thriller’. Especially one where the JOKER isn’t in his traditional makeup, acting in ways viewers expect.” I wonder what kind of juggling Nolan did to pass Dark Knight. And, to close this up, have “Batman and Gordon. BFFs”.

Over last week, SNYDER answered a few questions regarding Metal. About the collected editions, according to what he’s been informed, a Hardcover with just the 6 main issues will be coming out first, followed by a Trade Paperback including Lost, Wild Hunt and possibly The Forge and The Casting. He also revealed that a few Evil Batmen designs got scrapped, like a “Punisher style Batman”, and a Dark Arts Batman. He is also already working on his first script for a post-Metal project, which will have “fun story effects from Metal”. As for CAPULLO, he shared a stunning panel of Wonder Woman free-falling, holding a mace, and another featuring some interesting chimps. Talking about Detective Chimp, Snyder revealed that he might be playing a big part on Wild Hunt, all thanks to Grant Morrison’s genius to see logic in what people will usually let slide. Apparently Morrison “pointed out that Detective Chimp’s initials make him a great keeper of DC lore, like a homeric figure for the DCU”, as this page by HOWARD PORTER suggests.

Batwoman switched hands for a brief moment as KATE PERKINS took writing duties while Bennett’s on her first break since the title got relaunched. The issue got featured in Midtown’s weekly pull, making Perkins as happy as a kid in Halloween counting candy. Intruder alert! There is a woman at the door, says she is doing variants for something called “Harley & Ivy meet Betty & Veronica #5”. No one seems to have had the dignity of letting me know we would be having BILQUIS EVELY in the Batcave, but I’m so glad we do. Just look at this beauty of a cover, and Mat Lopes’ choice of colors is so good.

The final issue of The New Order will be coming out this Wednesday, and so Kyle Higgins shared a panel by TREVOR McCARTHY to get us ready for the epicness. As for the regular title, despite not being the artist on the latest issue, CHANG was the one to design the new characters that appeared in it. He shared his originals, including King Sturgeon (past and present), Lucy (past and present), and Mallory. With all of the spotlights on Superman this week, DAN MORA was the sole artist to attend the honorary gathering in the Batcave. Dan was already featured as our Gothamite and he is the artist on the covers of Batgirl. He went with the other red-head in the team this time, with a simple yet stunning black and white Batwoman sketch.

We’re on a Batgirl streak with our Gothamites. For this week I gave in to my self-indulgent tendencies and we’re bringing some shipping into the Batcave. As those who follow the inner workings of fandom will know, sometimes people will declare a week to be “Ship X Week”, and each day will have a theme for artists to follow. A couple of weeks ago it was time for Dick/Babs, and so I took the chance to bring one of my favorites to the Batcave, ANDY, most known as AVATAR ANDY.

Despite all expectation with this Nightwing enthusiast, it was not Dick who drew me to her, it was Babs. Andy, who leans more towards Babs as Oracle, draws her as the fierce nerd who will surely kick your butt without breaking a sweat we all love and sometimes miss from pre-Flashpoint. To go through her work is to find incredible portrayals of Barbara, both on her own, with Dick, or their Earth 2 son, John. Pieces like Barbara as an actual, supernatural Oracle, or some endearingly funny Dick/Babs scenes like Dick being a pun-bomb. Even better, you could click on that Barbara Gordon tag and scroll your way into happiness with incredible art.

The chosen piece of her works for Dick/Babs week is the one Andy made for Day Three: Domestic . Not only for those two just being themselves on a perfect capturing of their characters, but also the attention given to the background. Yup, right there on top of the shelf, with the plushies and the wedding picture. That, and the fact that Babs would never, ever refrain from helping with household chores because of her paralysis. She would crack that pot on Dick’s head if he even suggested it. Andy, in fact, struck me as a bit of Barbara herself during our short conversation. I asked her what made the character stand out to her, and what led her to pursue an animation career. Her answer basically translates to: They don’t do it, and I like it, so I’ll do it myself. In her own words, “Barbara’s one of my, if not most favorite DC character, especially as Oracle, because she progressed and achieved so much (being the leader of Birds Of Prey as well as mentoring other heroes) despite The Killing Joke happening. She doesn’t let her limitations stop her, she’s just really inspirational and badass to me. I draw a lot of her because DC no longer portrays her as Oracle and it’s the most I can do about it.” Inspired by that, I’ll even bend the rules of the Batcave – SUE ME, BATMAN! I could not choose between two of Andy’s more recent works, so I’ll just feature both. Please do enjoy a cute Babs in fluffy Christmas sweaters and wearing round glasses. I’ll always have a thing for Barbara Gordon wearing round glasses, I would have nightmares with flying glasses coming after me if I chose not to have this one in the article.