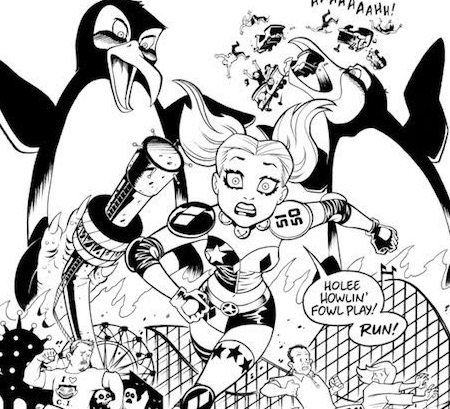 We’re entering the coverage of last week’s news with a sprint and a jump, with no time to catch our breaths as DC Comics announces an event upon event. The past three weeks have brought to light their plans for Action Comics #1000, the No Justice event, and now DC Nation #0.

Coming out the Wednesday before Free Comic Book Day, the #0 issue kickstarts a new magazine that will be coming out every month, covering news of the DC Universe. It will be made available for in both physical ($0.25) and digital copies (free). To start with a bang, the first issue will be bringing together Tom King, Clay Mann, Scott Snyder, James Tynion IV, Joshua Williamson, Jorge Jimenez, and the debut of Brian Michael Bendis, working with the semi-retired master, José Luis García-Lopez. Our full report has already come out, but let me spoil you something: the Joker is hearing the word about a certain engagement, and he’s not happy. The plans for the future of Bendis with DC Comics have also come to light in an exclusive interview he gave to Forbes. His debut on DC Nation will be followed by a Man of Steel special six issue mini-series, that will lead to him taking over both Action Comics and Superman, the latter getting renumbered back to issue #1. PETER J. TOMASI, who’s currently writing the title together with Patrick Gleason, says their run will be ending with issue #45, followed by a special oversized. And to bring this visit to Metropolis to a close, I bring you one of CLAY MANN’s pages for Action Comics #1000, with unbelievable colors by JORDIE BELLAIRE. Because I couldn’t let this beauty pass by.

White Knight continues to beat all expectations. Murphy himself repeatedly says that “Minis aren’t supposed to sell, but you came in droves to buy White Knight, stunning everyone at DC.” At this moment, issue #1 is in its fourth printing, and issue #4 has just gone to its second printing. With all of those reprintings, Sean says he’s not able to tell how many copies have been sold, and that “Not even DC knows yet because it’s still selling units.” His guess is “upwards of 120k.” Issue #5 will be coming out this week, and much of the spotlight seems to be on Batgirl and Harley. With Batgirl, there will be a classic moment of Babs being the voice of reason while Dick and Bruce are at each other’s throat. Murphy says that he’s “always seen her as the most mentally stable, level-headed member of the team.” Honestly, I can’t see anyone arguing that, except for maybe having Alfred join her on the not-so-stupidly-stubborn realm.

As for Harley, she will be delivering some kicking of butts to Jack. On a lesson, of course. Working now on colors, Marini shared a finished page from the upcoming second volume of Dark Prince Charming. I would be looking at that well-executed black eye if it weren’t for how insanely well framed that first panel is. CAPULLO’s pencils this week showed us the Folk Metal version of Aquaman.

And STJEPAN SEJIC shared some of his designs for the Gotham Resistance event that happened back in the beginning of Metal, including Killer Croc, Harley Quinn, Nightwing and my favorite, Robin. From some of the peeks MANAPUL has been sharing, we can tell that even though the Titans were not included in the roster of the four teams that will be taking front stage in No Justice, they will be part of the event. He shared a panel where we can see Wally West (Flash), Lilith (Omen) and Garth (Tempest), as well as one with Nightwing. He also shared a panel featuring Damian. Frank Tieri revealed this week an upcoming Harley cover drawn by AMANDA CONNER after a rough by the late and great DARWYN COOKE. As for interiors, INAKI MIRANDA shared a panel from issue #39, as Harley gets what is either a bear hug or a hug attack. LEE BERMEJO continues to tease his upcoming project, this time with a Constantine shot. What does it have to do with Batman, you ask me? Well, you see that tiny sliver of skin on that black background? That’s the Bat. Bermejo shared a wider, uncolored version of this shot on the Stories feed of his Instagram, and in that, we could see both characters. Since the artist published it in a temporary feed, we won’t be adding the screen-cap in here. PATRICK GLEASON and Peter Tomasi have been promising a Maya Ducard cameo for a while now, and she is finally going to be appearing in Superman #43.

Beware, a tiny ball of rage is coming your way. MARIA FERNANDA, or Feri-MariFe as she goes around, is our Gothamite of the week. She is one of those people who manages to capture all of the aspects of a character just in the way they are drawn, thus shorty Damian was born, dedicating his bratty superpowers to pester his brothers to death.

Maria draws her influences from cartoons, especially Butch Hartman’s style (Danny Phantom, Fairly Odd Parents). She says she likes “how the expressions on the characters are drawn in the show as well as the line art.” Her merit is in how she makes that style work to convey character. In fact, she has drawn the entire Bat-family (plus the Joker), and their characters are completely imprinted in how they are drawn.

Her love for Batman runs in the family. She says that her sister was the one to properly introduce her to the character, since she only knew Batman from the cartoons. “I was surprised when she told me that there was more than one Robin and that Batman was way darker than what the cartoon presented”, Maria says. That ‘What do you mean there is more than one Robin?’ moment is something many of us who did not grow up with the comics can identify with, myself included.