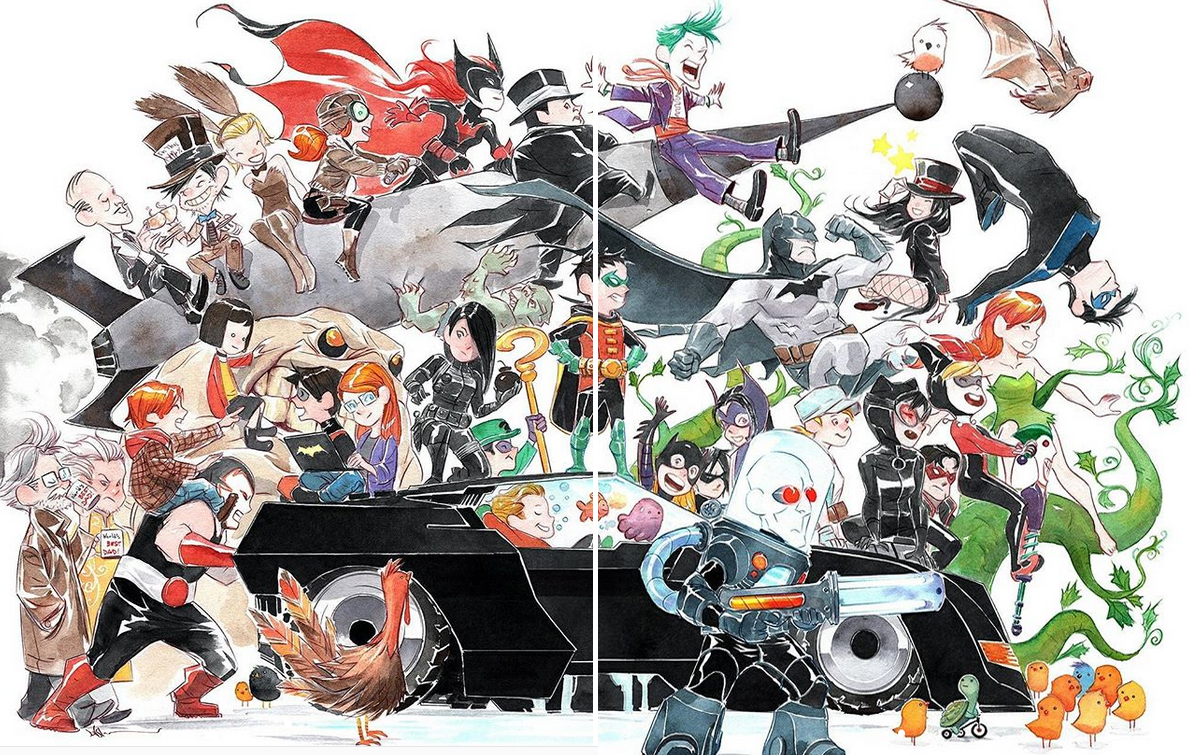 Welcome to the Batcave, and the coverage of this week had us cheering on one end and crying on the other. The week started with the celebration of Bruce Wayne’s fictional birthday, which, according to some calendars, would be February 19. To properly mark it, nothing better than remembering “Better Days” by PETER TOMASI, IAN BERTRAM, DAVE STEWART and SAL CIPRIANO, featured in the Detective Comics #27 special from the New 52.

Despite the celebration, May’s solicitations came out this week, revealing that a number of creators will be leaving the Batcave. Two runs will be coming to an end, as James Tynion IV leaves Detective Comics and Nightwing changes hands once again. Those two cases are more thoroughly covered on their own sections, but there are a few titles being canceled that we do not usually cover here in the Batcave: Batgirl and the Birds of Prey, Bombshells, and Super Sons.

While not usually featured, those titles are an integral part of The Batman Universe. In lights of those news, the Benson Sisters released a farewell note as they leave the Birds to a new, unannounced DC title. Marguerite Bennett did the same to say goodbye to Bombshells, saying that “All good things must end.”

As for Super Sons, the cancellation was only made clear on a tweet by Peter Tomasi that confirmed it, but he guarantees that there are more projects featuring the boys that cannot yet be revealed. He also revealed that the boys will be getting a crossover, the Super-Sons/Dyno-Mutt Special #1, coming in May. JORGE JIMÉNEZ also released a statement of his own, saying that “This cover was made with my heart. It’s the closing cover for Super Sons.. I am totally proud of the great work that everyone in this team has done, from the involved editors to the great writer Peter Tomasi and the great colorist Alex Sanchez.” Despite not being behind the latest issues of the title, Jorge was the character designer for the series and continued being the cover artist even when he was not working on the interiors.

After the first installment of Everybody Loves Ivy, a lot of people were left wondering why in heavens did Bruce punch Alfred twice. To answer that question, TOM KING has thrown some other questions our way: “This is Batman, the detective, the scientist. A punch isn’t always a punch. What did he learn from the 1st? And the 2nd? Why is that difference important to his planning?”

My own wild theory is that he was testing if there was a programmed response in Ivy’s “contamination” to the Bat symbol. He was practically naked for the first punch after all, which prompted no response from Alfred, who was already infected. But I guess we’ll have to wait and see.

The announcement of the end of TYNION’s stellar run on Detective Comics coincided with his return to Twitter. The writer also made public that it will also be his last issue in Gotham City for the immediate future. His full statement reads:

“It’s pretty clear from solicits, but unclear enough that folks have been messaging me since yesterday asking about it… But my last issue of DETECTIVE COMICS will be #981, coming out this May. More than that, it’s my last issue in Gotham City for the immediate future.

I’ve been working on Batbooks for almost six years. It’s hard to say goodbye. It’s easier when I’m doing it at the culmination of everything I’ve built over the last two years in Detective Comics. The name of the arc, BATMEN ETERNAL, also marks it as the end of a kind of informal trilogy of the three Eternals. They’ll always be my Gotham. (My first Gotham, anyways), but I wanted to nod to what this means to me to be stepping off. And I’ll write up something long and sappy with all my special thankses and all of that come May. But until then, there’s a lot of work to do. Because I’ve got big things brewing.”

He still can’t reveal where he is going next – and this seems to be the case with the vast majority of creators that are in limbo right now. Tynion did say that big things will be coming out of No Justice, the upcoming team event to be written by himself, Scott Snyder and Joshua Williamson.

Given the success of the debut issue of the series, which has been “selling out all over the place”, creator LIAM SHARP came forward to thank his readers, saying:

“I’m absolutely blown away by all the kind words, support and goodwill today. I’ve waited my whole career to tell a story in comics featuring Cernunnos and Celtic mythology. So glad it seems to have landed well! Thanks all!”

And if you were wondering how to pronounce some of the Gaelic words on the story, he says that “For those interested – Cernunnos is pronounced Ker-nu-nuss. Tir Na Nóg is pronounced cheer na noag.”

Solicitations have revealed that Marcus To will indeed be involved with the project. Early official announcements for the event had Manapul as the sole artist, but To did get mentioned in Manapul’s statement about the project back then. And as he progresses on his work, FRANCIS MANAPUL continues giving some sneak peeks into his take on the characters. This week he shared Amanda Waller and Brainiac with the caption “The ultimate showdown”, some “oddball” members of the Green Lantern Corps that he says “are the most fun to draw”, and Lobo and the Atom “Just being bros”, as Dr. Fate and Starro stand in the background.

I’d be amiss not to go into the silver screen realm here. As of this week, Warner is probably looking for a new director for the Batgirl movie, since Joss Whedon stepped down from the project. More about that on our weekly coverage of the DC films.

As for the comic book proper, SCOTT GODLEWSKI has been sharing some of his WIPs and says he is “totally up for a Gordon series.”

Solicitations revealed that BENJAMIN PERCY and CHRISTOPHER MOONEYHAM will be taking over Nightwing starting in May. Only one month ago that it was announced that Percy would be leaving Green Arrow, the title he’d been writing since the beginning of Rebirth, but he seems to have started working on his first script for Nightwing right around that time.

Joining Percy and Mooneyham on the title will be Declan Shalvey as the cover artist and Katie Kubert as editor, meaning the title will also be going through editorial changes since Chris Conroy was the editor for the end of Seeley’s run and the duration of Humphries’.

The mystery of mysteries, Chris Conroy, Sam Humphries and Bernard Chang all remain social-media silent on the issue. Considering all of them have a record of saying their farewells to a title when they leave it, this might mean something is still to be announced. With DEXTER SOY soon to be returning to Red Hood and the Outlaws, the artist is back to his usual casual sharing of Jason Todds. This time, drinking some Choke-a-Cola.

Before moving on to Batman-proper, I’d like to bring the attention to FRANCESCO FRANCAVILLA’s fantastic project for Black History Month. The artist has been working on portraits of historical black athletes that he then publishes with a short description of their feats. As of the time this article is being written, the latest athlete was Serena Williams, with a caption that reads “Tennis powerhouses Venus and Serena Williams (pictured) were the first sisters to win gold medals in the tennis doubles competition at the 2000 Olympics in Sidney.” He has up until this point done one athlete for every single day of the month, and will probably continue to do so until we reach the end of February. It is an all-star collection of outstanding human beings in incredible portrayals, and they all look incredible when put side-by-side, as seen in the college he did after completing the first 3 weeks. FRANCAVILLA also published a short collection of DC heroes in black and white, a little unusual coming from him. Another one of our usual guests, DUSTIN NGUYEN shared some process shots of the wraparound cover for the recently announced Lil’ Gotham hardcover. When putting together both parts of the final art as revealed in his Instagram there is a teeny sliver of it that is missing. We left it that way, but the final result can still be captured. Nguyen is probably the best artist for assembly images of the Gotham cast, and he did not disappoint here.