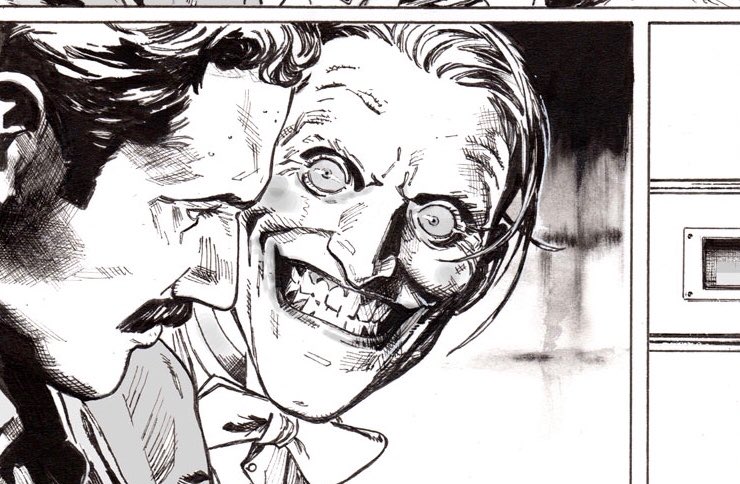 We enter this week’s Batcave with very little news to cover despite the big events of the weekend: the Oscars and Emerald City Comic Con (ECCC). From the Academy Awards, we have the non-news that this was still not the year that director Christopher Nolan got an Oscar. Gary Oldman, who played Commissioner Gordon in Nolan’s trilogy, did score Best Actor for his part in Darkest Hour though.

As for comics proper, since May’s solicitations broke the news of a number of titles being canceled or put on hold, there has been some expectation for announcements from DC Comics. A major conference like ECCC seemed like a perfect place to make those announcements but none came. It is fairly safe to say at this point that DC might be waiting for Metal to come to an end. There was one big announcement made by the publisher though, but not involving the Batman Universe: Sandman is due to return with the Vertigo imprint Sandman Universe with titles that will be under the guidance of Neil Gaiman himself. Can’t blame a girl for being overly excited about this. Up until this point, Tony Daniel’s Joker in Batman RIP was my personal choice for the creepiest take on the clown, but I guess there is a new contender. CLAY MANN’s Joker for DC Nation #1 is pretty damn creepy. What in the name of all frozen grins is happening here and how come can someone not have nightmares after drawing this. To try and ease that image out of our brains, here is LEE WEEKS’s Gordon for an upcoming Batman issue. As King puts it, “I know what he’s looking at…and this is unsurprisingly perfect.”

This week’s Detective brought Kate Kane to a trial – except, well, a trial she was not present at to defend herself. The issue featured all of the members of the current Bat-family with some stunning characterization by James Tynion, and he said that “Aside from all the things that it is obviously about, 975 is really just me making up for the fact that Barbara Gordon is my second favorite Bat-Family member, and I’ve written her the least of ALL of them.” As for upcoming issues, JAVIER FERNANDEZ shared a WIP that is currently being colored by MARCIAL TOLEDANO. Just a tiny update coming from Murphy – aside from the preview for next issue, coming out this week – and it is sassy Harleen dismissing the Bat. With promises of more announcements coming soon, Snyder has officially opened the teasing season for the sixth and final Metal issue. The first peek is all destruction and debris and Hal Jordan in armor.

No Justice is still a couple of months away, but Snyder is now joining in with FRANCIS MANAPUL in teasing art for the event. Francis himself shared a Beast Boy saying that “Garfield’s quickly become a favourite of mine to draw” and a Green Lantern Corps tease, a theme repeated on the tease shared by Snyder. As it turns out those are two halves of one panel and put together they make for a fairly interesting Corps panel. After leaving Super Sons, JORGE JIMENEZ has been migrating from title to title in DC and I wouldn’t be surprised if he’s announced as the artist for one of the post-No Justice series. As of now, he’s been working on something that includes Batman and Wonder Woman. EDDY BARROWS is another artist with no title attributed to him at the moment. While his next project remains unannounced we can appreciate some of his Batman art with “I’m only testing this new pen” piece he did. Testing, he says, this is him testing. Barrows is just too good to be true. Another artist who’s currently in limbo is CHRIS SAMNEE. While this is technically me cheating over here, since Chris only worked on one issue of Batman: Black and White, he usually works on some amazing Bat doodles. As it turns out, his contract with Marvel has just recently finished, and a girl can’t help but hope that he might come over to draw one of the Bats. Only just this week Samnee delivered two amazing warm-up pieces, one of Commissioner Gordon and another of Batman.

And to close the roll call of our guests of honor we have ERICH OWEN, the artist who draws Teen Titans Go! He graced us with a Go! version of Sean Murphy’s White Knight, and it just looks amazing. I’m especially liking that Duke Thomas over there.

After a one-week break, our Gothamites are back and with a very special guest. KOZMO-KAI is only the second cosplayer to be featured here (shame on me), and he well deserves it. I mean, it is not every day that one comes across such a well put together Animated Series Two-Face, with incredible make-up and costume, plus a well-crafted photograph taken in a well though-of setting. Kai Ramkisoon, our Kozmo-Kai, put this fantastic design together with make-up artist Tracey Lennard and photographer Wile Antz Pixography. In an interview he gave to Punk Black, Kai talks about, among other things, what got him into cosplaying. He says, “Being an artsy and self-challenging person all my life, it only felt fitting that I gave it a try. I was just ready to go all out and do my best. So after several ‘Okay next event, I’d try cosplaying’ later, I finally made my cosplay debut in July 2016.”