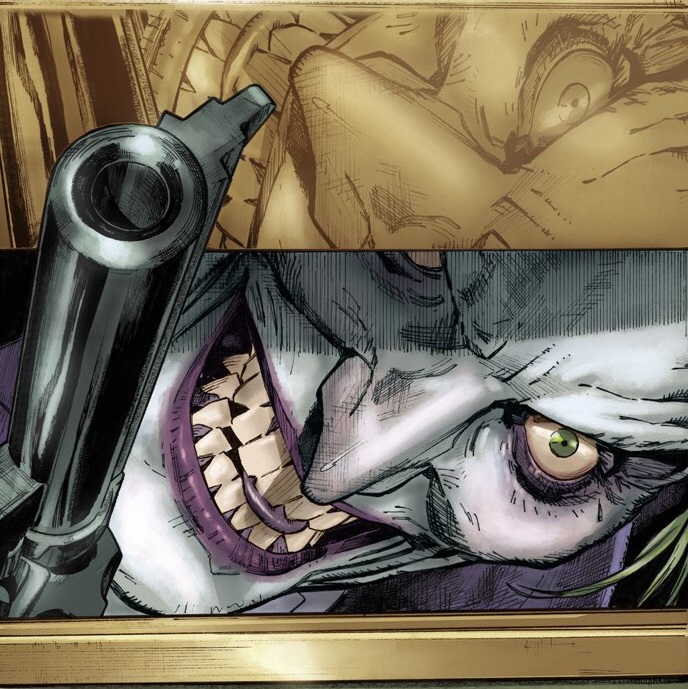 This weekly report on all things Batman is being broadcast straight from Chicago as we disperse from the grounds of C2E2. Two-Face is having a ball, as this double two con is also the bringer of two big news. First and foremost, Catwoman is getting back her solo series. Written and drawn by none other than JOËLLE JONES, who is probably the single best-suited person to take this book out of everyone working on Bat-Books at the moment. The series will start on the same day as Batman #50, which also happens to be the wedding, and also happens to come out on the Fourth of July. It shall be a purrr-fect day for some feline fierceness. It was also at C2E2, during the Diamond panel, that DC announced that retail orders for DC Nation #0 have reached the one million mark. It was also revealed that current orders for Action Comics #1000, a comic priced as high as $7.99, has surpassed the half-million figure. Again in duos, two variant covers for DC Nation got revealed by the artists this weekend, one by RAFAEL ALBUQUERQUE and the other by CLAY MANN. Coming up in Batman… Halt!, we’re not there yet! Before we get to the juicy pieces of art that are waiting in the near future, let us go into some speculation. The voice of people must be heeded, and it sounds like they are chanting Scarecrow all the way from GCPD headquarters to Wayne Tower. At least those are the requests TOM KING has been getting, according to himself.

But we have a few milestones to go through before that, like the coming of Booster Gold and the havoc he’ll bring with him, as shown in the cover for issue #46 by TONY S. DANIEL, DANNY MIKI and TOMEU MOREY. And then we got to see JORDIE BELLAIRE’s colors on the previously revealed creepiest of the creepy Jokers as drawn by CLAY MANN. And then there is LEE WEEKS on the mystery of the unbreakable skin. Not truly a big reveal, but it seems we have to thank JAMES TYNION himself for a Gotham team book even existing at the moment. During one of his usual “I’m bored, shoot me some questions” sessions, he commented that “It was a book I wanted to do for a long time, and DC liked the idea enough to do it in Detective rather than a smaller side-book.” I just got hit on the head by a Wingding. Not the infamous font, no, but one of them Nightwing-‘arangs. Holy urban background, Batman! Can CHRIS MOONEYHAM draw a fully detailed, lived-in and slightly decadent city environment? The urban planner in me is all excited and cheering for this upcoming arc. Hidden in a little tease of action to come there might be a revelation. Sharing a sketch by SCOTT GODLEWSKI, Shawn Aldridge commented: “Also so that you know the issue of Batgirl I’m writing is packed with action.” So, apparently, he might be staying for just the one issue. We’ll probably only know for sure once solicitations come out for July though.

BATGIRL AND THE BIRDS OF PREY This is without a single doubt Superman’s year, with the character celebrating 80 years and Action Comics hitting the #1000 milestones. KAMOME SHIRAHAMA then took the cue and paid homage to Action Comics #1 for her variant cover for issue #21 of the Birds.

BLANCO just revealed his redesign of Alice, Kate’s villainous sister, who should be reappearing on the pages of Batwoman. He says it is heavily based on the original design by J.H. Williams III. MIRKA ANDOLFO has been sharing a number of progress sketches as she draws her upcoming  Harley issue, featuring Big Bad Mallet as a not-so-special guest.

With THAT scene happening in issue #7 (you know the one, the Robin one), SEAN MURPHY felt like it was time to explain his Reversal of the Robins once more, so he went into a long thread explaining the hows and whys of it. It reads:

“When I 1st conceived White Knight, I knew I wanted Nightwing (Dick) in the story and I wanted him to have already split off from Batman on not so great terms (like in TAS). I never planned on using Todd, because I honestly didn’t know much about him. For issue 2 I needed a scene where Harley got fed up with Joker–he needed to do something so awful that she (being the “good” Harley) would finally be disgusted enough to quit. So I threw Todd’s death in there as a sort of Easter egg. But I completely missed the fact that this meant Todd was the first Robin, and Dick the 2nd. Thus reversing the order. For readers who are thrown off by that, I’m really sorry and I’ll try to do better research next time. 🙂 BUT, I’m happy to report that most readers really didn’t care. Because it’s non continuity, and because many seemed to like everything else about White Knight, they quickly shrugged it off. Which is partially why I think I have the best readers in comics.”

In fact, the whole situation drew his attention to the character so much that Sean is now saying that, should he work on a sequel, it will contain Jason Todd. For now, we can take the bittersweetness of there still being one issue left of White Knight – one that Murphy has already finished drawing -, and that it’s variant cover will feature the clown royalty of Gotham. As he works his way through the highly expected (at least by me) Damned, LEE BERMEJO has been sharing a number of peaks of his art. Well, in fact, he had been doing it even before the project got announced, but that’s another story. He recently shared a frontal shot of the Joker, who’ll be dead in this story, with some delightful hashtags such as #WouldntHeLookBetterWithoutANose and #WouldntWeAll. And then there’s some #Batass doing some #Batsquats. Not my words. Me, I’m skipping the butt and looking at that insane city and how that perspective makes it look like it is something bigger than life. No sky to be seen here, folks, no sky.