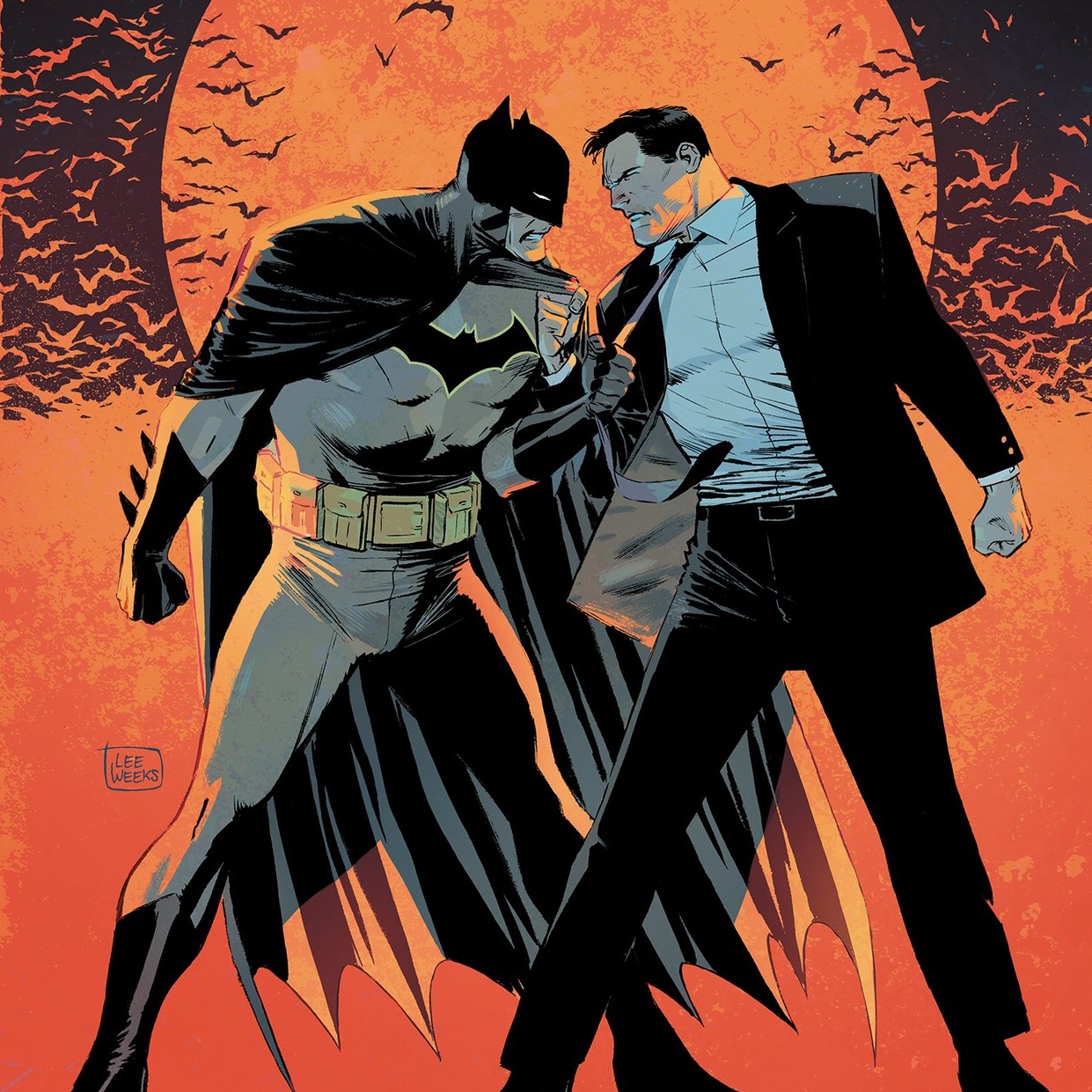 My bat-fellas, it’s been so long! Oh, how I missed the damp, acrid smell of this place and the company of the most nocturnal of all. One full month has passed since we last got to visit the Batcave, and it seems the stars have aligned and there hasn’t been a huge enormous unbelievable stack of news to be covered in the meantime. Just a big heap, nothing that a night of patrol wouldn’t be able to cover. And right after Mother’s Day. One should not mention a certain name down here on this day, you all know which one. And no, my mother’s name is not Martha.

Let us start with some bad news so that we can finish with, if not good, at least unusual news. This past week, DC Comics announced that their price tag will be raised to $3.99 for all ongoing titles.  Furthermore, the digital copy that came with the higher priced issues will be dropped. AND Young Animal is getting canceled/going on an indefinite hiatus. A full report has already gone up on our website, including Gerard Way’s statement regarding the end of the imprint spearheaded by him.

Batman Ninja has also come out in this time we’ve been absent, and you can check out Donovan Grant’s review for it. In Don we trust, and he gave it 4.5/5 stars, so I might as well be watching it while I write this article. Or not. You’ll never know.

And finally… I mean, we do cover merch here at The Batman Universe, but it usually does not get mentioned here in the Batcave. But this time, I had to. Guys, meet the Batman Battle Chicken. For full details, follow this link I’m linking while typing about the link. So meta. I’m still trying to make sense of a chicken for battle. A warrior hen. A Bat-chick who wars. I don’t know, I just love it.

Coming up in Batman… Wedding (Issue #50), 21 artists working on a 38-page issue that has a narrative structure that, apparently, require this diversity. And not any artist, no sir. Not only are David Finch, Joëlle Jones and Clay Mann returning, but the issue will also feature art by Frank Miller, Jim Lee, Greg Capullo and Tim Sale.

And since Tom King is the master teaser of comic books, he’s started sharing some of the art to come in Batman (which might or might not be related to the 50th issue). Like ANDY KUBERT’s classic Bat Cat.

And LEE WEEKS’ stunning Bat meets Bruce (or so it seems) with incredible coloring by ELIZABETH BREITWEISER. But closer to us is Batman #47, coming out this week. TONY S. DANIEL has shared his cover for the issue, showing a mighty pissed Batman coming after Booster Gold. And Booster, by the way, seems to be trapped in the universe he himself created for quite some time, considering the tease Tom King shared of DANIEL’s art. We’re closer and closer to the end of the current run on Detective Comics. A huge number of creatives have come and gone, and editor CHRIS CONROY took a moment to thank each and every one of them in a long, “sappy” as he himself called it, Twitter thread.

Starting with a comparison between the first and final covers for the title, the full thread goes from his pride of having worked in a book that had been “pure superhero comics, the way I’ve always wanted to do them. The soap opera, the spectacle, the detailed worldbuilding”, to Conroy expressing his love for the whole team – with a slight preference for Batwoman. He then goes on to praise James Tynion, the writer on the series since the beginning of Rebirth, saying that Detective Comics allowed him to reach ” THE mountain he was training to climb. Next comes a higher one.”

Next, Conroy went on to compliment the artists, starting with Eddy Barrows and his “gift for the ‘wow’ image”, and how his ” storytelling absolutely exploded”. Then Alvaro Martínez, whose first work for DC was Detective, who Conroy says “dazzled the world and showed y’all what I saw inside him from the jump.” The editor also mentions the work of Ever Ferreira and Raul Fernandez, who are the inkers for Barrows and Martínez respectively and how they are all together “perfect organisms. Deadline crushers and geniuses.”

Those, the main artists on the title, were also joined by a number of people who Conroy thanks, such as Marcio Takara, Fernando Blanco, Ben Oliver, Carmen Carnero, Christian Duce, Javier Fernandez, Philippe Briones. Colorists Brad Anderson and Adriano Lucas are, as Conroy puts it, the  “Gods among colorists”. The title was also lettered by Marilyn Patrizio and Sal Cipriano, who “juggled some wordy-ass pages”, says Conroy. I guess I can say for the majority of Bat-Fans out there when I say this run will be remembered in times to come. Coming out of the isolation that the New 52 brought to the characters, it was a breath of fresh and much-needed air to have a team book in Gotham, and with characters that, at first glance, should not really work well when in a team. The Detective Comics creators and editors made it work, and I hope the sparkle of the Gotham teams does not die out after their run comes to an end.

Aside from Detective Comics, Batgirl is another title that will be saying goodbye to their current creative team – and this might or might not be old news depending on how much you follow social media. Around one month ago, HOPE LARSON came to Twitter to announce that she was indeed finishing her run on Batgirl. Back then, she declared that “There are a couple more issues still to come, but for the next couple years, I’m busy with original work. It was a terrific experience working with DC Comics, and all my editors and collaborators, and I can’t thank them enough!” Her reasons, she said, are purely work-related, as she is currently writing/drawing a new book and, even so, “still don’t have enough hours in the day.” All the luck to Hope in her new endeavors!

Taking over after the current team leaves will be MAIRGHREAD SCOTT writing and PAUL PELLETIER drawing, as revealed in July’s solicitations.

BATGIRL AND THE BIRDS OF PREY

While we’ve been away, Batgirl and the Birds of Prey has come to an end after issue #22. The Benson sisters have had already released an official note back when the cancellation of the title was first announced, but they have come to say their last farewell this past week. JULIE came first, thanking both DC and Geoff Johns for their 2 years run on the title. Both Yasmine Putri’s variant and TERRY & RACHEL DODSON’s cover (seen below) were linked in the tweet. SHAWNA took the cue to add that they “are so honored and humbled by those of you who read the book. We appreciated all of your comments (good and bad — the good is validating and the bad make us work harder to do better). And we are so thankful to be starting a new DC adventure with Green Arrow!” For those unaware, they will be the only females behind a male-lead title at DC once they start their Green Arrow run. All the luck and success to them, and here’s to more diversity in superhero comics!

Not wanting to brag but still proud of himself, FERNANDO BLANCO realized that, a coincidence of coincidences (or not) “In March, Batwoman stopped her sales dropping and even sold a couple of hundred more. Why? I have no clue. Inscrutable mysteries of the direct market… But it matches with my comeback to the series! just saying…” Here’s to hoping it will only be upwards from now on. WILL CONRAD, the artist taking over starting next issue, has been sharing a number of WIPs showing not only a slightly tweaked Beyond costume but also what looks to be a looming and sulky Batman statue. JOELLE’S CATWOMAN IS COMING. That’s all I have to say here. We close this Batcave with yet another farewell. Or maybe a see you soon? The final issue of Batman: White Knight has come out, but Sean Murphy has gone from hinting at a possible a sequel that he says “would evolve around Bruce and how he grows after the events in vol 1.” to working on a “Secret BATMAN project”. In which Batman wears the exact same outfit as he does in White Knight, collar and all. So I’m not saying it is the sequel, but I’m saying DC would be stupid not to approve the sequel and I don’t think they are.