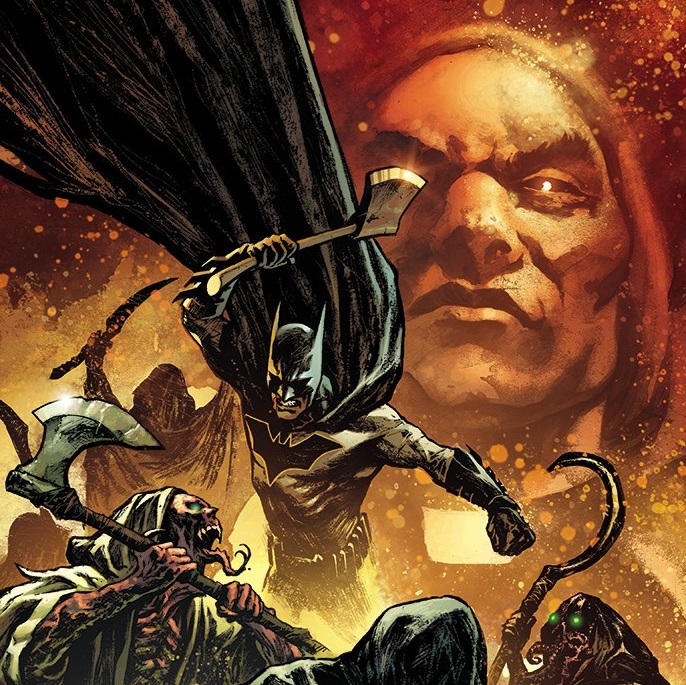 Welcome, birds and bats, to another weekly update on the Batman comicdom. The countdown to the wedding starts this week as the first issue of Prelude to the Wedding comes out, and we are two Batman issues away from the main event. A multitude of artists are working on variant covers for Batman #50; this past week JASON FABOK shared a little tease for an upcoming cover of his. Despite not commenting on which title or issue the cover would be for, the fact that it features Batman and Catwoman on it is a clue that it might be one of the Batman #50 variants. Also, after a long time of solitude without any guests visiting, the Gothamites have returned. Alfred has baked some biscuits and is currently brewing some tea, so stay until the end.

With both King and Mann attending a convention this weekend, there hasn’t been very much news regarding future events to come out except for the usual art teases. Firstly, Tom King shared yet another of LEE WEEK’s art for an upcoming story featuring Mr. Freeze.

He also shared a page by MIKEL JANIN that looks like it might belong to the Best Man storyline, when the Joker goes after the Bat and the Cat because of their wedding plans. CLAY MANN, who is also working on an upcoming issue, shared a Harley Quinn tease, indicating that the clown princess of Gotham might be taking part in a Batman story in the near future. A bit further down the line, TONY S. DANIEL will be returning to Batman after his short stint on the Booster Gold storyline. The artist is currently working on issue #55 – which will have a 9-panel grid – and shared an image of a prosthetic arm and that of a balding man taking a shower, whom he says is not Bruce. Before we get to the current creative team, I’d like to take a moment to mention James Tynion’s recent post on Tumblr. Titled “A Few Words About Tim Drake and Detective Comics 981”, his post tells his story with comics, Batman and Tim Drake in particular. Tynion says that, early on, Tim stood out to him, “This awkward, earnest teenager who cared so much about his friends, and his strained relationship with Batman.” Later on, he says, “I developed a strong connection to Oracle and Cassandra Cain. And I kept following Tim, wherever I could.”

The most important bit in it, I would say, is how Tynion points his view on Batman as a character. To him, “Batman is a story about family. About a man who loses one to tragedy, becomes an engine to fight that tragedy, and finds people like himself to build a new family around him, while protecting them from the trauma he faced by being so alone for so long. Sometimes people think of Batman as a solitary character, but Batman only existed for a SINGLE YEAR without Robin (He was introduced in 1939, Robin in 1940).”

Tynion’s post is long but worth the read to whoever loved his run on Detective Comics. He goes as far as mentioning his thought process once he learned he would have to kill Tim Drake early on in Rebirth.

But Detective Comics goes on, and coming up next is a stand-alone issue by Michael Moreci, Sebastian Fiumara, and Brad Anderson. This issue comes so that the creative team working on the following storyline has a little more time, but it sure looks as if it will be worth our time. Moreci shared FIUMARA’s cover, featuring the main villain of the story: Deacon Blackfire. As for Bryan Hill, he’s been answering a few questions on Twitter about his five-chapter story arc that he says will be about “Bruce’s relationship to his legacy and what “Batman” really means, to the world and himself.” Hill says that he will also be “engaging” the Bat-Team as built during Tynion’s run, with a villain that is “engaging it in a way that will cut Bruce to the bone.” Furthermore, he says Batman will get to do some detective work in it.

For Nightwing’s next annual – coming out in August -, DC will be bringing back together the Percy-Schmidt team that worked on Green Arrow for the major part of Rebirth. SCHMIDT’s cover for the issue has been revealed, and Percy says it draws influence from an “oldie but goodie” Superman story that also dwells on the “sometimes terrifying power of the media.” SCHMIDT has also shared one of his sketches as he works on the issue. The variant cover will be by JAVIER FERNANDEZ, who worked on the title at the beginning of Rebirth. Hope Larson said goodbye to Batgirl this past week, and the writer used her Twitter to thank her readers, editors and the artist who worked with her during her run.

The upcoming issue, by Shawn Aldridge and Scott Godlewski, will feature “a new take on the Street Demonz, Two-Face, coffee, a super cameo, and some touchy feely stuff” according to Aldridge himself.

Renee Montoya will be showing up in Batwoman in the near future, according to BLANCO’s little tease. WILL CONRAD shared one of his WIPs. It seems like we’ll have a new villain: giant hand monster. The more Joëlle shares of her upcoming work on Catwoman, the more excited this cat gets. Before Sam Humphries takes full reign of Harley there will be two issues written by Christopher Sebela, drawn by Mirka Andolfo and colored by Gabriel Eltaeb. ANDOLFO’s cover for the first issue of the two-parter has been shared by Sebela.

BATMAN: SINS OF THE FATHER IENCO is currently working on the last issue of the limited series and shared a WIP.

Kicking in the door and opening our Batcave to guests once more is BETS. Much like many of us who started reading comics later in our life, Bets started blind as a bat but then couldn’t help but fall in love with the night dwellers of Gotham City. She admits to have “always been curious about the Batfam but I never really tried learning about it.” And, as tends to happen when it comes to this medium, Bets “had NO CLUE how to get into comics, I was so lost.” Lucky us, this did not stop an eager spirit to venture into reading them.

More bright, blocked colors than lines, Bets’ style is not so common among superhero comic art. At all. From the Batboys (Alfred included) to Batgirl (and wouldn’t this make a fantastic poster) and the Gotham City Sirens, Bets’ art stands out for being so unusual with these characters that have been around for years upon years. Having been introduced to comics later in life, Bets is influenced by artists of different backgrounds, saying that “My flat, block-colour art style is something I’ve been using for a couple of years now, before I got interested in comics!” Bets can be found on Twitter @Grumpybets. Our short interview went as follows.

What would you say made you into a Batman fan?

I became a Batman fan quite recently, only last year! I’d always been curious about the Batfam but I never really tried learning about it. It was July when I saw a Batfam artwork by Kelpls, and I decided that I would feed my curiosity and try to learn more. The thing was, I had NO CLUE how to get into comics, I was so lost, so I asked people and they pointed me in several directions: ones that I didn’t take.

I decided to just start by reading Nightwing Rebirth, and although I had absolutely no idea what was going on, I still LOVED it!!! After that, I did a lot more research and started reading more Batfam comics, until I reached this point! It was a hard and long process, and half the time I didn’t know what I was doing, but it was so worth it! Being a Batman fan means exposing yourself to a family of incredible characters that you can’t help but love.

Regarding your art style, you usually go for bright, flat colors. Did this come from a specific influence or was it an aesthetic choice?

My flat, block-colour art style is something I’ve been using for a couple of years now, before I got interested in comics! I was tired of my old art style and felt like I was at a standstill, I came across a few artists who used the flat art style and I thought I’d give it a try; and predictably I fell in love with it. As for the bright colours, I only recently started using them. Before I used to use pastel colours, but once again I got bored of it. I felt like my art needed some life in it, which is why I decided to start including some brighter colours in my work!

Which artists and media would you say influence you the most?

As for artists that inspired me, during my exploration of my art style I came across many artists that had a similar style to what I wanted to achieve, just to name a few: Tiara (@Engwand), Mohtz (@Eaumohtz) and Iree (@Sodation). After I entered the Batman fandom, I discovered an artist that not only had a beautiful flat colour art style, but also drew Batfam, and they also became a huge source of inspiration for me too! Their twitter is @Qingmeijun.