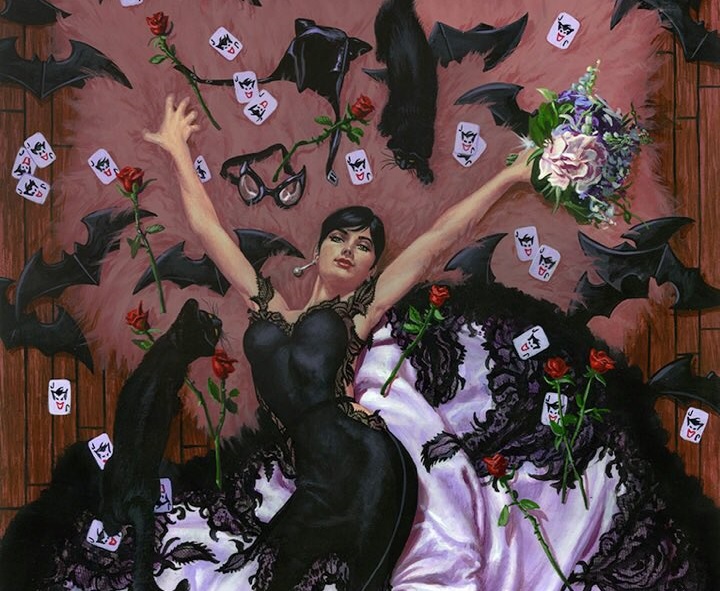 Did anyone invite the Joker? I mean, to avoid him from going on a killing spree? Well, since no one cared to, I guess we can continue with our weekly report on comic news for all things Gotham.

The full guest list for Batman #50, the wedding itself, has been revealed. Now close your eyes (figuratively, not literally, or you won’t be able to read this) and picture me as Tony Appleton, Independent town crier, and herald of big news. Now you can return to your usual mind voice. Oddly enough, some of those names had been left out of the official release. As freelance heralds, our duty is to keep up with the latest updates, and TOM KING made sure everyone was on the list. Also, if you’re a regular flier, please stick until after the proverbial –horizontal line– following our Gothamite interview for some non-comic, not so great news.

I have no idea how wedding food works in other places, but where I come from there is this traditional tiny, wrapped and practically portable cake that they give as a gift to guests as they leave the party. This cake is called bem casado. It literally means well-married. It is delicious. It is the best part of any wedding. So yes, I’d very much like to get a BatCat bem casado, please.

We can’t always get what we want though, so I’ll just have to make do with the amazing variant covers that have started to come out. I’d rather have the cake though. Wrapped in those covers. TYLER KIRKHAM chose a nice, friendly frame of villains. JORGE JIMÉNEZ went all whip, latex and leather – has anyone ever seen a better rendition of latex? JOE JUSKO, together with Joëlle Jones herself, is probably the better artist to draw Catwoman’s dress and I’m in love all over again. By the way, he shared the entire process of the painting on his Instagram, and it looks gorgeous at all stages. CLAY MANN went with romance on the back, fun on the front. A reverse mullet. This is not confirmed to be a #50 cover but that ring on Selina’s finger is enough of an indication for it. But not everything is about the wedding, no sir. LEE WEEKS has been working for a while on “Cool Days”, the story set to come right after the wedding. Which might feature Dick-Bats. And Bruce wearing a suit, an actual suit. Both are no new material, but they are always good for the heart.

Coming after that will be an yet unsolicited arc with TONY S. DANIEL, who’s all wrapped in his own work. Get it? Wrapped, mummies? No? I smell some sideburn-t wing coming from OTTO SCHMIDT’s kitchen. Schmidt is reuniting with his Green Arrow fellow Percy for the upcoming Annual. And Babs might be joining them too. Batgirl #24 is getting some highly special treatment by JOSHUA MIDDLETON, the artist for the variant cover. Written by Shawn Aldridge and drawn by Scott Godlewski, the issue is due to come out this month. Oh, joy! Jason and Roy are back again! The Annual  – coming out in September – will be bringing the two redheads back together – fight me, believers of black haired Jason. CLAYTON HENRY is the artist working on the issue and some of his – incredible, should I say – WIPs have been coming up for the past month. Jason, one eye swollen, pointing his gun right at you; Jason, wearing a sling, probably wanting to murder someone and a BAM! POW! Batman. After working on what seems to be a Justice League Dark cover, GREG CAPULLO is now ready to “deep dive into my final Batman story on the new Black Label!” His last drawn figure on the said cover was Detective Chimp, but it also includes Swamp Thing and Wonder Woman, two characters Capullo has previously expressed his love for by opening a poll on Twitter asking which one of the two he and Snyder should tackle after Metal.

BATMAN TALES: ONCE UPON A CRIME Fridolfs and Nguyen are soon to be making one of the most awaited comebacks in recent Batman history. Thank the bat gods NGUYEN did not “forget how to draw this guy”, as himself put it.

Ever wondered how something would look in Bruce Timm’s Batman: The Animated Series style? Worry no more, for RICK CELIS is answering some questions you don’t even know you needed answering until you see what his answer is.

Our Gothamite this week is a diehard Batman fan, has been since the Batmania years, and has made it his mission to do everything in BTAS style. Star Wars inspired Bat character? You’ve got it. A mashup of Robin and the Winter Soldier? Yup, also done it. Batstroke? Already on the menu. Sean Murphy’s White Knight design in BTAS style, a mashup of the Comedian with the Joker, or just a Deadpool intervention on the cover of Batman #1. You name it, Rick has done it. One of his most recent series is the Gotham: The Animated Series. Drawing the actors in BTAS style with their shadow shaped like their BTAS characters, Rick has drawn Jerome, Alfred, Bruce, Selina, Nygma, Oswald, and Gordon. The artist says that he decided to draw these after asking himself how a BTAS prequel inspired in Gotham would be like.

And since we’re all about the wedding in recent weeks, I wouldn’t let Rick’s version of Selina wearing the dress escape this Batcave. Rick’s work can be followed on Instagram, Twitter, DeviantART, and Tumblr. Our interview with him went as follows.

Your art shows a lot of Bruce Timm influence. What is your story with this style and what made you pursue it?

I grew up watching Batman: The Animated Series, which is, for me, the best animated iteration of the dark knight to ever be made, from the color scheme down to the score. Bruce Timm’s style balances out the positivity of classic comic books with the darker aspects of our hero. When I saw it for the first time, I was fascinated, and when you love something so much you immediately try to follow it. At least it was like that for me.

You recently started a series of mash-ups between the Gotham series and the Animated Series. What was the idea behind it?

It was mainly just for fun. After watching a few episodes of Gotham this idea came to me, “how would a BTAS prequel be like?”. So I decided to do it on my own, imagining how it would be if the live action series was produced by the animation team of BTAS (and my sincerest apologies to them for trying to emulate their style). Maybe it was me just trying to keep the nostalgia of that universe alive in my mind. Either way – this was just me diverging – my main motivation was that everything will always look cooler in BTAS style.

What is your history with the Batman Universe? What are the elements that appeal to you?

As a kid of the 80’s I lives the Batmania. I’d watch the cartoons and Michael Keaton’s movies, I’d read the comic, all of that. It all made Batman become my favorite. Besides, he is “The most dangerous man on Earth” despite being human (and that’s not me, I’m just quoting Superman!) He is the world’s greatest detective, he is a strategist, escapist, ninja! How can anyone not like him? Mainly, though, he’s BATMAN.

Finally, one last note. As some of you might know, I’ve taken a not-so-short break a while back because of some personal deadlines. Well, they are back, folks. Architecture school, final project, second out of 4 jury presentations, all that jazz. We’ll be returning one month from now, on the 3rd of July – yes, a Tuesday, because deadlines ain’t got no respect for the Batman. In the meantime, be sure to follow TBU on Twitter for retweets of new art hints and comments that would normally appear here. Please keep the Batcave tidy while I’m away, and no sliding down the banister or hanging from the chandelier. I’ll see you soon.