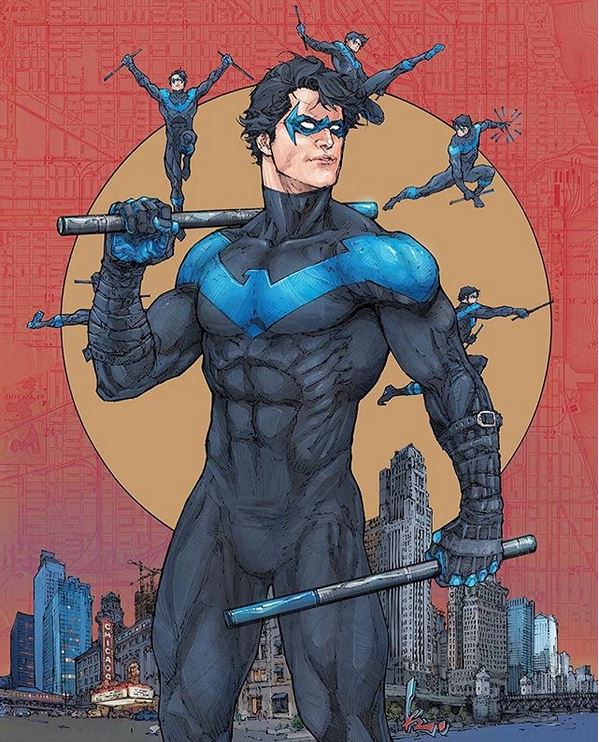 Errant bats flying by, beware. We’re sorry for the slight delay with our scheduled meeting about comics here in the Batcave, but we had to take a slight detour along the way. I hope no one got hurt trying to come downstairs with no lights on. While we were absent, you might have noticed a certain Bruce Wayne taking notes in the darkness. Those notes? They’re going to become a book DC has recently announced: Anatomy of a Metahuman. Written by S. D. Perry and Matthew Manning, and illustrated by Ming Doyle, the book will be told under Bruce Wayne’s point of view as he analyses with anatomy drawings the metahumans that surround him. It looks as amazing as it sounds.

Batman #50 sure was a controversial issue. In a recent interview to the World Balloon Podcast, TOM KING addressed not only the reasoning behind his plot for Batman but also some clues as to what may come in the future. Well worth listening.

Even though we might not be getting a lot of Catwoman for a while in the Batman title, TONY DANIEL’s art for issue #55 shows us the return – even if for a while – of the original three: Bruce, Dick, and Jim. DANIEL also shared his draft for the same splash page, showing the characters in different poses and a much more broody Nightwing. Some other sneak peaks of his art include Batman grappling across Gotham’s skyline and another one shows Nightwing by his side. As for this week, we’ll finally get our hands on the first issue following the not-wedding, which will feature what Mitch Gerads has called “a perfect Batman page”. Coming from LEE WEEKS and ELIZABETH BREITWEISER I guess there was no way we could have been disappointed. That color scheme, though. So good.

The current storyline in Detective Comics has Jefferson Pierce, aka Black Lightning, working together with Batman. Despite their team up, BRYAN HILL, current writer on the title, has clarified on Twitter that “Jefferson has NO intention of becoming one of Batman’s tribe. Maybe they have the same goals, but their methods are different, and the method is their nature.” Another character that has been getting some attention in this storyline is Cassandra Cain, who, based on this tidbit of a panel published by MIGUEL MENDONÇA, can be expected to appear in full regalia in upcoming issues. He also provided a peek of a panel of the Bat in action.

Nightwing will be getting a KENNETH ROCAFORT variant cover. The artist, better known here in the Batcave for his work in Red Hood and the Outlaws, shared his cover on social media. He is not solicited as the variant artist for any of the issues until September, so he might be filling in for someone else. OTTO SCHMIDT shared a, as he puts it, “Grayson with anime influence” on Twitter. His Annual will come out next month. ELENA CASAGRANDE, the artist on Batgirl Annual #2, shared a panel that of a fierce-looking Barbara – actually, make it a full page of fierce-looking Babs. She is still wearing her Burnside costume, and it is likely we won’t be seeing her in her new costume until September.

As he worked on the final issue of Batwoman, FERNANDO BLANCO shared a noncommittal bit of the last page. Batwoman will be ending with issue #18, coming out August 15. Not long ago, DAN JURGENS wrote a storyline revolving around Damian. Now, he says he has “another surprise queued up for #25”, likely an appearance by one of the members of the Bat-Family. #25 is still unsolicited, but will probably be coming out October as the first issue of a new story arc. On the art side, WILL CONRAD has been behind the wheels and will likely remain. He’s recently shared a panel from an upcoming issue showing Terry surrounded by thugs. CAPULLO has started working on what Snyder has deemed as the final chapter on their Batman story. From what we know of Last Knight, this will be a completely insane tale, possibly taking place in another world, as Batman wakes up with a talking, severed Joker head attached to his belt. Before he gets to the insanity of it, though, Bruce seems to be in his regular reality. Well, at least it is what one can assume considering Alfred is one of the characters CAPULLO is drawing.

That’s all for now, folks. Those who follow us closely will realize that there haven’t been any Gothamites for the past weeks. This is due to some scheduling complications, complications which will likely remain until the end of the year. Rest assured they will return at some point, there is plenty of bats in this belfry who are worth sharing with the world.