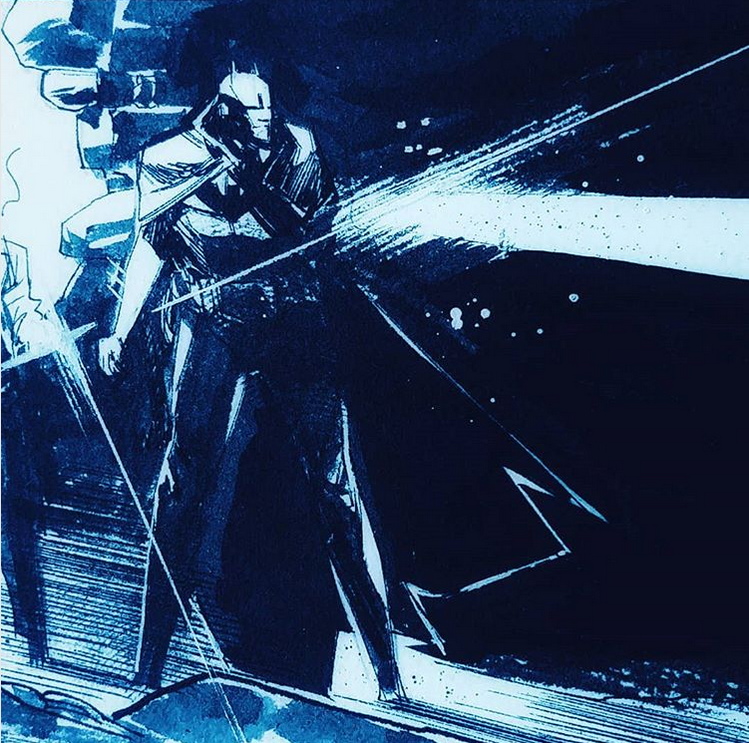 I’m sorry for the delay, Alfred Pennyworth has gone to Hollywood to chase his acting career and I couldn’t for the life of me figure out how to open the Batcave. And talking about side projects, this week’s coverage of comic book news is filled with imprint and out-of-continuity titles. With the amount of those that have been recently announced it’s no wonder the crowd down here in the Batcave would get more diverse. You know, bringing more people from the outside, just following Batman’s lead. What, you haven’t heard of it? Batman and the Outsiders is set to return! Picking up the threads left by Bryan Hill during his short run on Detective Comics, the title is scheduled to come out December. Bryan will be joined by Dexter Soy, who had been the main artist on Red Hood and the Outlaws since the beginning of Rebirth. Here is the cover to the first issue by TYLER KIRKHAM. There’s been some juicy clickbait going around the web claiming that DC confirmed Batman as an atheist, based on Bruce Wayne’s statements on his own faith in Batman #53. Tom King, once more caught in the middle of the clicks crossfire, once more used his Twitter to clarify things, saying that “Lot of people saying Batman 53 (which I wrote) shows Batman is an atheist. That’s not how I read that comic. But I don’t think my reading of it is the most important one. Anyway, I hope you read the whole thing for yourself and decide for yourself.”

Well, kind of hard to be an atheist when one of your best friends is the related to the Greek pantheon, daughter of Zeus himself – depending on continuity, as everything ever in comics. Also, let us all remember that one does not simply jump from Christian to an atheist with nothing in the middle. There’s a whole spectrum of faith and an infinite collection of religions out there, be them Abrahamic or not.

Enough prodding that particular bees nest though, let’s move on and focus on another animal. Not a bat, not a cat, not even a robin. Penguin, as it seems, should be appearing anytime soon in the pages of Batman, which will also mark the return of MIKEL JANIN to the title.

King also reinforced that Dark Knights: Metal will have an impact on his run. At some point. In some way. Guess we might, but coming from King, guesses is all they’ll be, despite him saying that “It’s pretty obvious if you’ve been keeping up…”

He’s going to break our hearts, he says. He’s going to destroy our every string of emotion, he says. Nightwing #50, you better come quickly, because the anticipation is building up. Benjamin Percy, regarding the speculations that have been going around about the injury Dick will suffer in Batman #56, said that “I’M NOT TELLING YOU ANYTHING (except that Nightwing 50 is going to hurt your heart and explode your adrenal glands and will undoubtedly be your favorite comic book of all time).” Also, coming out this week is OTTO SCHMIDT’s Annual, preaching the word of DickBabs to the world. Protect your jugulars, because Batman is going full toothy monster in this teaser by WILL CONRAD for Batman Beyond. io9 released an interview with Azzarello and Bermejo. Focusing on Batman: Damned, the creators reaffirmed it as a supernatural, horror story, and one which will involve not only John Constantine but also Spectre, Etrigan, Deadman, Zatanna and Swamp Thing. Lee Bermejo also revealed that his We Are Robin story, released during DC’s celebration of Robin’s 75th anniversary, was originally meant to revolve around Dick Grayson instead of Duke Thomas. The change, he says, only made the story better.

In the article not only was one of the covers revealed (above), but also one interior page. LEE BERMEJO also shared the same page on Instagram. In the caption, he suggests that the title will be coming out in a different format, saying that was the “Last tease until the title’s release. There is more out there online to see if you know where to look. Book one comes out on September 19th!! Exciting new format and 48 pages of story in each volume.” From the images released, the pages of the comic seem to be slightly more square than usual, which might mean it will be in European format. And surprise surprise: the Black Label titles will not be exempt of variant covers. At least one is confirmed for Batman: Damned, by JIM LEE. JOCK, with his mighty character design powers, has revealed some of his concept art for the new Dark Knight, guns and all. Continuing on the theme of fear established in Metal, Snyder says this is “Bruce’s 2nd worst fear after the BMWL. All lethal force Bruce.”

Confirming a suspicion that many of us might already have, CAPULLO has teased on Twitter that The Last Knight will have 48-page issues. His words were “I’m penciling page 17 of issue 1 of Last Knight. I’d only be 5 pages away from finishing. But, Last Knight will be three 48 page issues! Lead buuuurn!”

“Secret project. (I don’t care if this book is the worst kept secret in comics, I’m going to keep showing you guys progress and to hell with the consequences).” This is what Sean Murphy, bless his rebel soul, had to say about what is probably his least secretive project ever, while sharing rough pencils of Bruce Wayne taking off the cowl. And he goes on. Secret DC project! while sharing an obvious Joker. And, damned be the consequences, he goes and shares roughs for a spread of the Batcave. And a whole lot of Batmobiles to choose from. Gotta have the Batmobiles in a Murphy book. Rebel of all rebels, Murphy just refuses not to follow his own idea for promoting comics – can’t say it didn’t work with White Knight – which is basically tease them ’till you have those readers’ mouths watering for more. Or, in his words, “DC would probably prefer I not show any art from this book, but I have my own way of promoting these things: reveal lots of WORK IN PROGRESS shots that aren’t spoilery, building interest slowly. And once it builds proper buzz (going from BELOW RADAR to ON RADAR) announce the project at a con (or preferably when comics is very quiet, so I’m fighting less noise). Sorry to keep calling it “secret DC project”, but that’s just my way of keeping DC off my back until it’s time to announce. We’re shooting for NYCC announcement, so stay tuned!“ And BAMN! Batman with a flashlight. While Murphy’s next project might be the worst kept secret in comics, Three Jokers is locked inside the safest vault inside the Batcave. At least is what we’re led to believe from Fabok’s comment on his art silence, saying that “I wish I could show you guys some of the panels I’ve been working on for Three Jokers (But I can’t!). I’m breaking a lot of my rules I’ve set for myself (of what I will draw and not draw) because I believe in this story more than anything I’ve ever done and the themes in this book.”