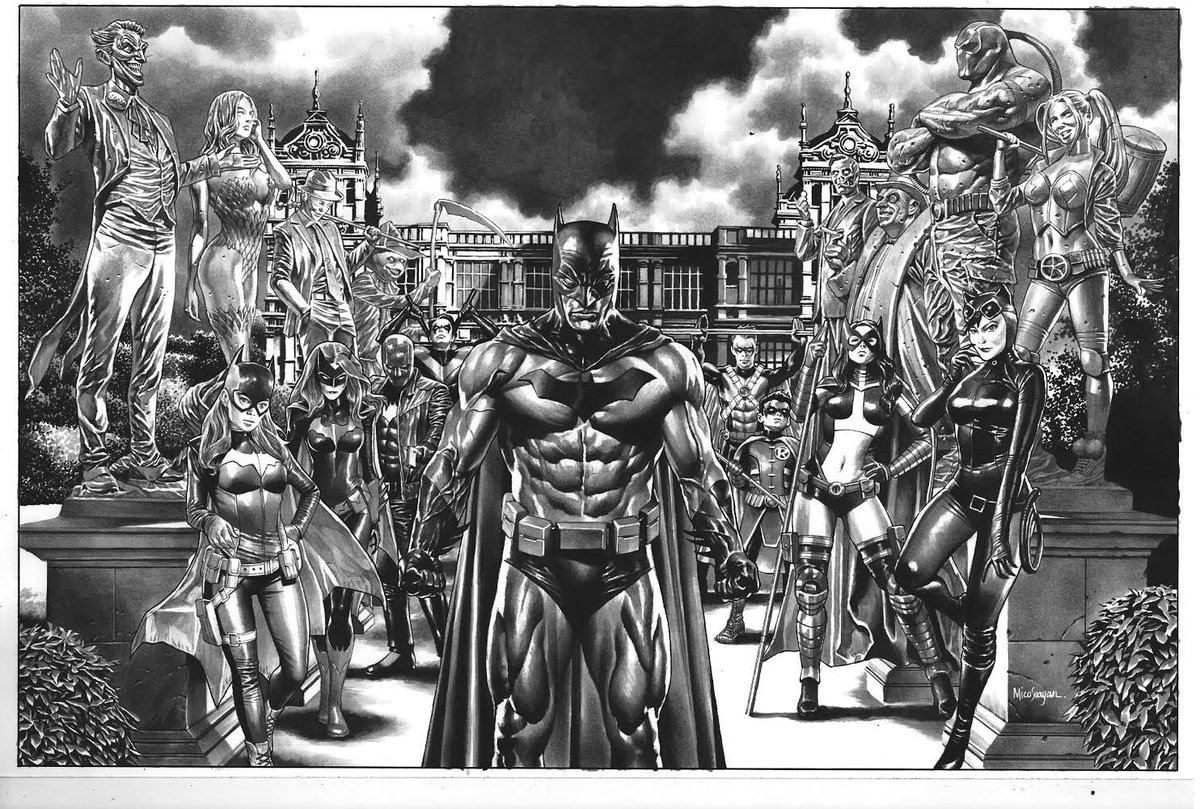 It has been so long my little batsies! After months of neglecting our weekly meeting to discuss comics news, the Batcave has been gathering dust and spider webs. I’ll tell you something, it took a while for it to be inhabitable once more. And the pile of unread papers and news that piled up? Unbelievable.

On the other side of the fence, movies news have been firing up, with Affleck officially out of the next Batman movie and a new Birds of Prey teaser coming out. I do am overstepping my boundaries here since, and you can always check out the full coverage in our weekly DC Films Update. We just had to say a proper goodbye to Mr. Batfleck, who in welcoming Matt Reeves to the Batcave back in 2017 inspired us to create Last Week in the Batcave. You were a great B, sir.

Since we’re over out boundaries already, Young Justice ladies and gentleman. Young Justice. Not only did we get Steph and Cass, but baby Damian, Jason and also Harper Row? Like, what?! They’re only missing Duke now, gotta love that show.

Let’s go back to what matter though. Starting with not so great news, the Batman Hush Omnibus that has been solicited for March has been canceled. As Bleeding Cool reports, this cancellation comes very close after Mark Chiarello, who had been the art director for DC Comics for 28 years, got cut from the editorial team. About that, creatives working for DC have pretty much all of them expressed their dissatisfaction with this news. Names like Doc Shaner, Terry Dodson, Dan Jurgens, Bill Sienkiewicz, Dustin Nguyen, Adam Hughes, Tony Daniel, Tom King, Mitch Gerads and Dave Gibbons have all expressed their sentiments regarding the issue.

On a possibly brighter side, Brian Michael Bendis has pretty much confirmed his first DC event. Named “Leviathan”, the event has been officially mentioned in his newsletter inside Cover #5, as reported by Newsarama. Artist Alex Maleev will be joining Bendis for this enterprise.

Coming out in March, Batman #66 will be having the illustrious JORGE FORNÉS as the artist. His noirish style will be telling one of Batman’s nightmares, this one featuring The Question – not Renée though, but Vic Sage. This past week, both him and Tom King shared some of his art for the issue: a classic KRAK fighting moment and a BatCat scene. The latest solicitations from DC Comics revealed that Brad Walker and Andrew Hennessy will be the art team taking over after Doug Mahnke and Jaime Mendoza finish their first arc. This week we could take a first look at WALKER’s Batman. The artist has shared a panel of one caped crusader looking like a hedgehog, entirely poked by arrows.

As per usual with many of DC’s celebratory issues, Detective Comics #1000 will be having countless variant covers, most of them exclusively sold in specific stores. For the past couple of weeks artist have slowly started unveiling their variants, and boy oh boy, hold on tight to your wallets because these are gorgeous. JASON FABOK went with the classic rooftop pose for his Yesteryear Comics variant. And, if you have that kind of money, he’s also selling the original in his official store. TONY DANIEL also kept it classic with his trademark knee-up pose. His variant will be exclusive to Comic Stop, a Dubai based comic shop. NICOLA SCOTT, whose variant will be sold by Kings Comics, made a companion piece to her Action Comics #1000 showcasing Batman through the years. Being the blesses angel she is, Nicola also promised to make a Wonder Woman version to complete the Trinity, “even though there’s never likely to be a Sensation Comics 1000”. Chris Conroy, the current editor of Detective Comics, made a compilation of variants in one long Twitter thread starting with BRIAN BOLLAND, exclusive to Forbidden Planet. Bolland went for a villainous gathering, including his ever-iconic Joker. ARTGERM did variants of his variant. Featuring the Gotham City Sirens, there will be three versions of his cover, one in his typical style, a golden age and a third one without any logos. His variants will be sold through his website. MIKE MAYHEW’s cover is probably the most dynamic art out of all, with Batman facing what seems to be all of Arkham at once. His variant will be sold by The Comic Mint. MICO SUAYAN worked with both the rogues gallery and the Batfamily for the Unknown Comics’ exclusive variant. And last but most definitely not least, GABRIELE DELL’OTTO’s variant for Bulletproof Comics, a beautiful acrylic painting of a Bat that’s got the swag.

While most of us might not have the eyes to notice the subtle differences, MAIRGHREAD SCOTT revealed that the latest Batgirl issue was the first one where she and Paul Pelletier experimented with plot-style scripting. The writer revealed in her Twitter feed that the change was something that she and Paul decided to do together, saying that “Well, it’s something Paul had enjoyed doing in the past and he’d stretched himself so much as an artist on our first arc (and he was great to start) that I figured I should stretch myself as a writer too. Ironically, plot-style is a LOT more work for both of us. Paul had a lot more choices to make in terms of panels, layout and pacing, while I had to write the script twice (once so Paul knew what he was drawing and again to condense the lettering so everything fix smoothly). On the other hand, I think this has pushed us both to do some of our best work yet. And it feels like a truer meld of both our talents.” Soon in the pages of Red Hood, the long-awaited return of Jason’s hair. PETE WOODS, the current artist of the series, admits: he’s glad it made a comeback.

This March the one and only, artist of possibly the best Superman in current times, Doc Shaner will be joining the Batcave for what seems to be a one-and-done issue of Batman Beyond. This week he shared in his social media his turnaround for Dick Grayson, mayor of Blüdhaven. He also admitted enjoying playing with the bats, saying that “I’m enjoying the hell out of drawing all the older characters in Batman Beyond. 1st time drawing Dick Grayson inside a book. 1st time I get to draw Barbara Gordon at all and she might be my favorite. The shapes in Old Bruce’s shovel face are so strongly composed. Frankly, I’m a little surprised how much I’m enjoying playing in the Batman sandbox, which for a long time now I’d thought just wasn’t for me.” JOËLLE JONES is one of those people in the industry that is just too good at what she does and she does it all when it comes to storytelling. She rarely ever shares works in progress, but when she does – and, thankfully, this week brought us one of those – it is to leave us all flabbergasted.

This is all for today, fellows. For now, meeting adjourned.