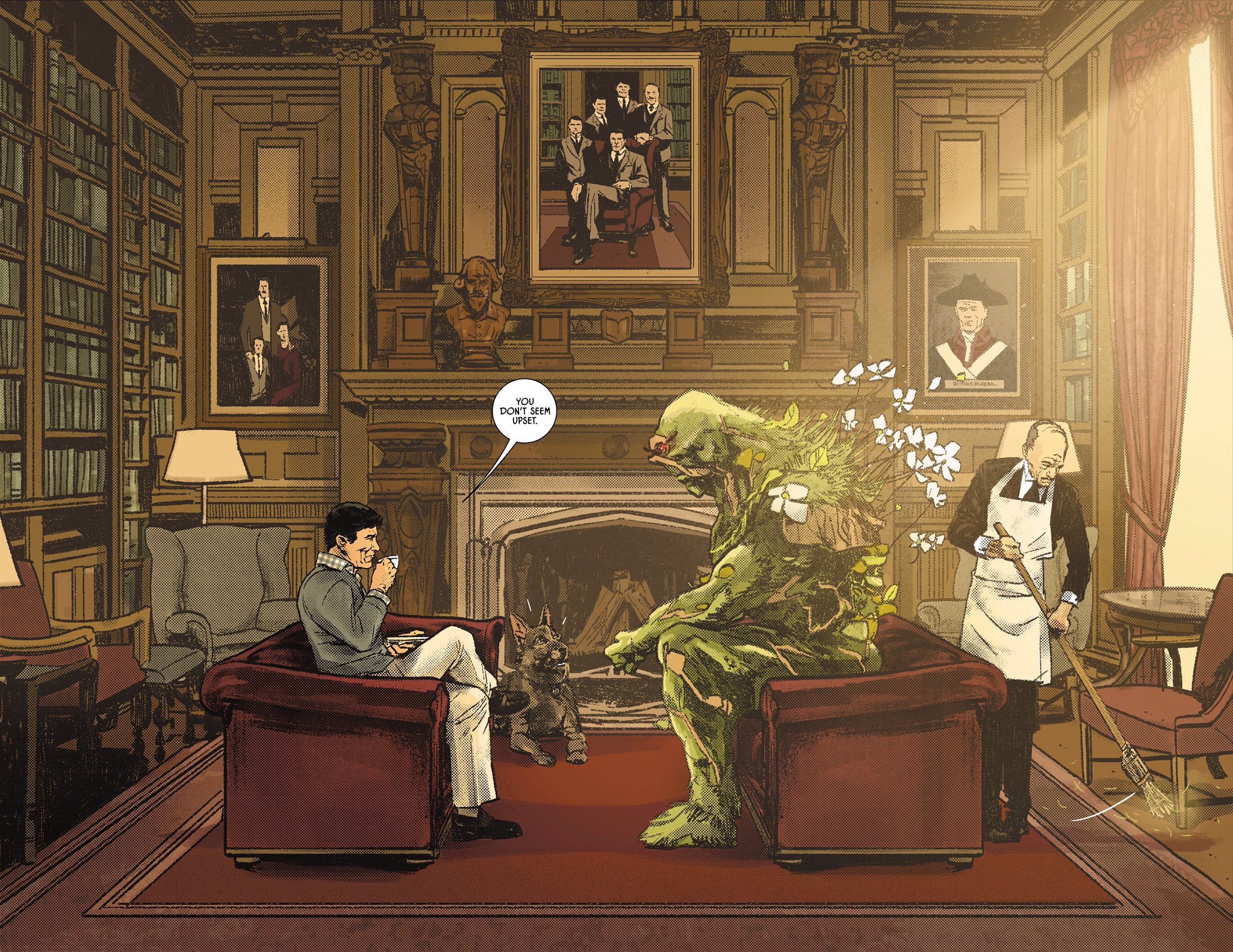 Of Lady Shiva, who runs neck and neck with Talia for worst mother in The Batman Universe, of Stephanie Brown, who gave her newborn child up for adoption for not feeling ready for the mother role, of Barbara Gordon, who is effectively the mother of the Bat-Family, of Leslie Thompkins who is one of the few mother figures in Bruce Wayne’s life. We are getting closer to Batman’s next big arc, “The War of Jokes and Riddles”, and KING has been sharing a whole lot of pages from it. This week, he has shared two pages depicting the killing spree that ensues after the Riddler and the Joker go to war with each other.

But this will come out in one month with issue #25. For this week, what we have is double Batman as issue #23 will be coming out together with the last installment of “The Button” in Flash #22. MITCH GERADS has previously mentioned that he would be hiding an easter egg related to Tomasi and Gleason’s run on Batman & Robin in this issue, and I was mentally preparing myself to read it with a magnifying lens not to miss the thing, but KING has shared a splash of issue #23 and as I was putting this article together I spotted it. Remember the family portrait from Batman & Robin that crunched our hearts under a really heavy boot after Damian died? Yes, it is now hanging in Bruce’s study. If you don’t remember this portrait or if you haven’t read Batman & Robin (I couldn’t recommend it enough, Tomasi is the best character-focused writer currently working for DC), here is the original piece. Bruce commissions a family portrait painting, but Damian’s death in the events of Batman Inc. leaves the painting unfinished, his whole body still blank. This is shown in Batman & Robin #18, Requiem, one of the most beautifully written mourning pieces I’ve ever set my eyes upon. It is completely silent, and if this scene of Alfred crying in front of the unfinished portrait doesn’t break your heart, you don’t have one. Later, when Damian returned to life, he himself finished the painting as is shown in Batman & Robin #40. What Gerads has brilliantly done is to have it hung in the position where Thomas and Martha’s portrait used to be, on top of the mantle piece, the most prominent place of the entire room. While the portrait was part of Tomasi and Gleason’s additions to the mythos, Bruce replacing his parents’ portrait with one of the family he has built himself was given to us by Mitch Gerads, taking Bruce from the position of the eternal little boy grieving for his parents to the position of a fully grown man with a family who still grieves and still remembers, but has what life he managed to put together while inserted in all of his pain.

I am so thankful for Mitch Gerads, Peter Tomasi and Patrick Gleason existing.

There was some news running around this week that Scott Snyder’s run on All Star Batman would soon be coming to an end. He has promptly come forward to clarify that he actually has two more big arcs plus small stories to go, bringing us up to probably issue #25 by the end of his run. The Dark machine is running on full steam. While CAPULLO continues to tease us with small pieces of his pencils, including one of Mongul, GLAPION has started inking the pages and gives us a taste of them, and SNYDER has gone and posted a fully colored image of the Justice League standing in a roman style arena, wearing some sort of improvised gladiator armor, covered in pink blood from the fallen alien beings they seem to have just fought.

Also, regarding the plot of the series, SNYDER has commented that it is built to expand on the cosmology established by Grant Morrison on Multiversity, an author Snyder – and myself – consider to have brilliantly expanded DC’s universe in every direction.

This week we are not reporting on the regular ongoing Nightwing series, but rather on the upcoming Elseworlds story, The New Order. KYLE HIGGINS, the writer, has been having to face the storm that has risen in the fandom for the seemingly fascist tones that the story seems to have, with Nightwing hunting down the non-human heroes of the DC universe. There are people comparing it to Marvel turning Captain America into a Hydra agent, to what Higgins has answered that it was not his inspiration, since he started writing The New Order before Hydra-Cap ever came out.

Also, he has guaranteed that this is not Dick Grayson running around committing genocide – which doesn’t exactly refutes the fascist argument, since the totalitarian regimes associated with fascism were not only promoting genocide, but persecution of those deemed unworthy. Furthermore, he has brought some further elements to light, such as the narration of book being made by Dick Grayson’s son as he reflects on what it is that made his father change from who he used to be – in Higgins’ own words, “the heart and soul of the DCU”, “His love, optimism, and belief in his fellow man is second to none.” – to “the face of the ban on metahuman powers.”

I myself am cautiously curious about it, since in all honesty I didn’t enjoy Higgins’ run on Nightwing, but I do like Gates of Gotham. The premise will have him walking on a tightrope, so let’s hope he has learned some circus tricks with Grayson and doesn’t fall over.

Missing the New 52 team of Outlaws? Well, know that LOBDELL will be having both teams meet, and he guarantees Starfire and Arsenal won’t just be popping up in small cameos, but rather as guest stars.

It seems this was a family week, with mother’s day this Sunday, the outlaws guaranteed to reunite, the family portrait easter egg, and a reference to A Death in the Family been spotted, as Dan Jurgens and Bernard Chang have slipped a reviving of the crowbar scene into Batman Beyond #5.

Talking about Robins, the Teen Titans are going through a high tide after The Judas Contract animation was released, followed by the announcement of the Young Justice: Outsiders and the Titans live action. ALEX ROSS has embarked on this and has shared a proposal piece he has made for the Teen Titans, featuring adult versions of the team, who are now the Justice League.

But before we get the launch of DC’s streaming service in 2018, Injustice 2 is going to be hitting shelves. To be more specific, it will be coming out tomorrow, May 16th. This week there was a media launch event featuring art by DC’s greatest artists, and FRANCIS MANAPUL has uncovered his working process for his main piece in the exposition.