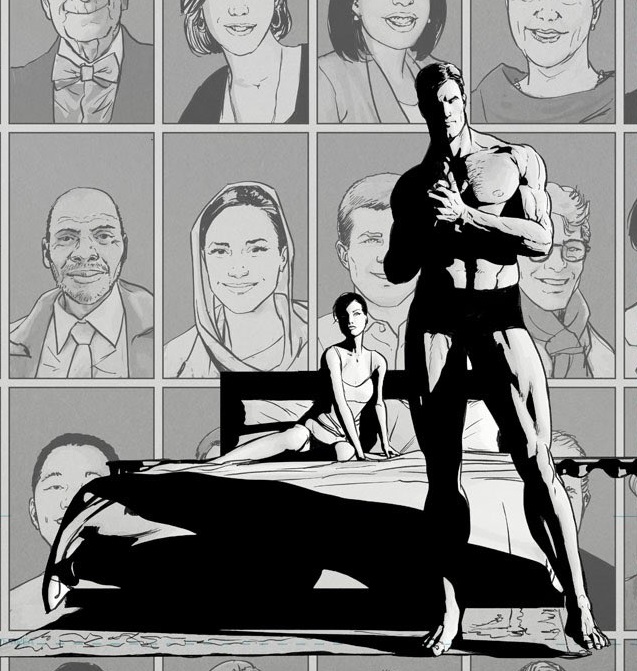 The intruder alarm has been going crazy this week here in the Batcave. Our security has been breached by people from all over DC, people from Star City, Central City, Metropolis and even Manhattan. A bomb was set in here, and it is yellow and round, with a smiley face on it. Of course I’m talking about the upcoming event which will be tying the Watchmen to the regular DC continuity. The Flash #22 finally hit shelves and in its final pages we got the announcement of Doomsday Clock, written by Geoff Johns with art by Gary Frank, the same team behind Batman Earth One. Very little specifics are known about it, and Johns himself has said that we will have further details at San Diego Comic Con, which is two months away.

While we wait for the clock to hit midnight, we can take yet another moment to appreciate how skillful our fellow artists here in Wayne Manor’s basement are. Just look at TOM KING’s notes for Batman #1 and what DAVID FINCH achieved as a final result. Holy stickman, Batman. A question was raised this week: what’s with TOM KING the number 37? It all started with a 37-panel page done by MIKEL JANIN. And then some fan realized that King used 37 in almost all of his major titles in one way or another. You can either agree or disagree, but for Mr. King 37 is the new 9.

Moving from 37 to 22, The Flash #22 hit shelves this week and JASON FABOK was the artist behind the cover, a callback to Flash #1. Problem is, Red Robin is on the cover but there is no Red Robin in the story. You all might know about some rumors running around, and Fabok’s answer is that the script changed and, by the time it did, it was impossible to change the cover due to deadlines. I guess we will forever wonder what the original script was like. SNYDER wants more Alfred. We all want more Alfred, always. The British butler is the focus of the current story arc, and Snyder is loving it so much – specially due to ALBUQUERQUE’s art – that it makes him wish he could do an Alfred series. Dark Nights, it would seem, is CAPULLO breaking a promise he made to himself: not ever to work on a team book again. But working he is, and delivering some amazing art as always. This week, his usual little teases included “I wish I could draw as fast as he runs”, also known as Flash; the most massive of all massive Batmans (look at how small Diana looks by his side, wow); and dear old Alfred, who seems to be a favorite this week.

We can all finally rewatch LEGO Batman! To celebrate its digital release, CHRIS McKAY, Batman himself, talked about some of the easter eggs of the movie, such as Scarecrow driving a pizza bike from Luigi’s Pizza, the references to Ferris Air (the company where Hal Jordan works) and the appearance of a Themyscira Airway (in reference to Wonder Woman’s invisible jet), and the fact that the LEGO Gotham is based on Chicago because Nolan’s trilogy was shot there.

And it is not only the LEGO Batman who likes to play some rock n’ roll; if you put the creators down here in the Batcave together they could probably form a Batband. Capullo is known for being an enormous Black Label Society fan and playing the guitar, but did you know JOCK once auctioned for playing the drums for The Cure? Yep, me neither.

Another one of our members that traveled down memory lane this week was DUSTIN NGUYEN. Watching some Batman: The Animated Series inspired him to recreate some scenes in his own style, such as the all-time classic scene of Alfred “admitting” he is Batman to Barbara, and Harley teasing the Bat. Jokes on you, Batsy.

Now going to the Ibero-American side of the world, JORGE JIMÈNEZ, the one behind the astounding work on Super Sons, shared his cover for the upcoming issue #6, where Jon will finally meet the Teen Titans. And sneaking into the Batcave we have JUAN FERREYRA. If anyone asks who allowed Green Arrow’s artist into the cave it wasn’t me, I swear. He found himself venturing into the darkness as he shared a Batman sketch this week. The logo is a bit off, but that cowl is killer. He would make a great permanent addition to the team.