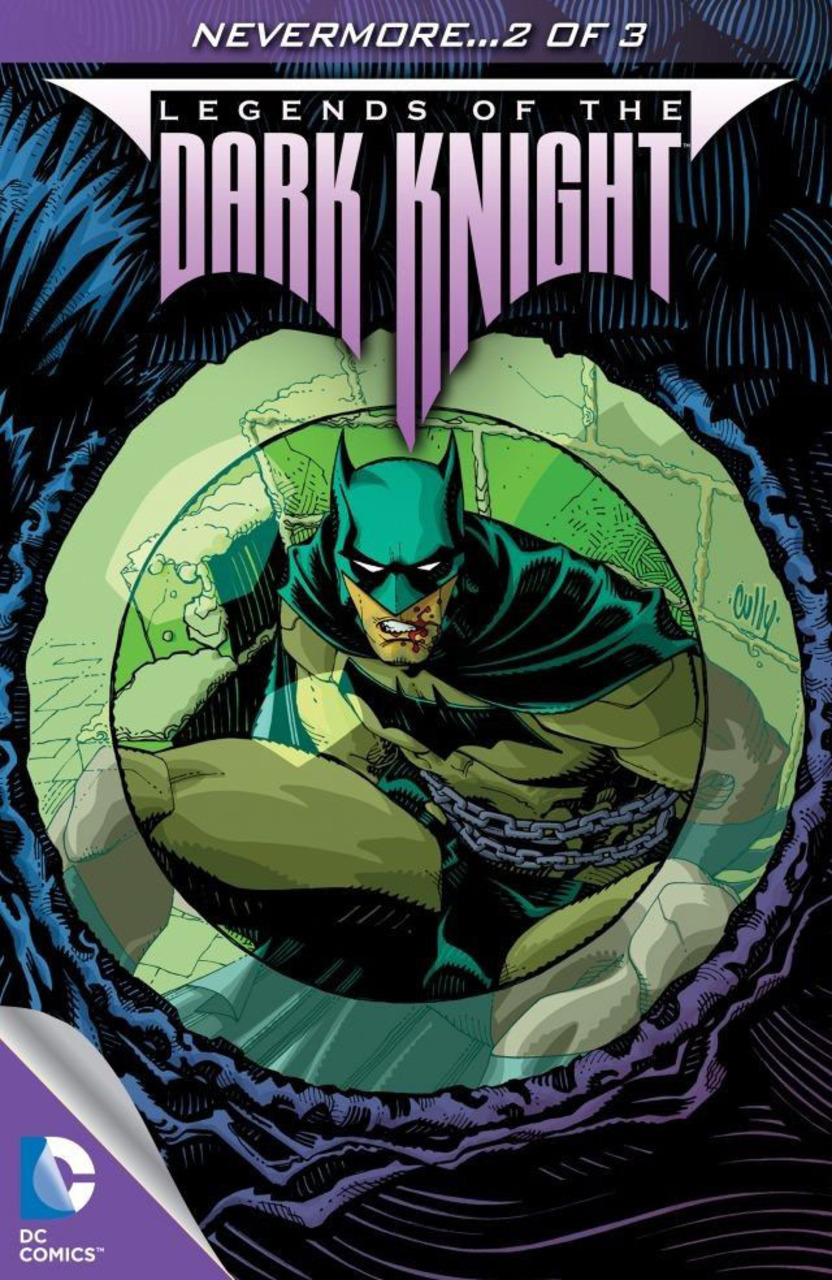 Our issue opens with the image of a raven, perched on the window sill at Arkham Asylum. We last left Doctor Updin talking to Edgar regarding the fate of Batman, and here Updin persists on asking what proof he has the Batman is dead…his body is nowhere to be found, we also discover that Catwoman is still missing. Edgar continues his story as we flashback to “Then.”

Edgar tells his henchmen to be careful with Batman’s body as they drag him down a flight of stairs, all the while Batman demanding to know where Catwoman is. The room opens in a large chamber, where we discover that Catwoman is tied up…right below a giant swinging pendulum blade. Batman tries to break free but is quickly subdued. Edgar informs his two captives that any further misbehaviour will be “frowned upon.” We then see one of Edgar’s henchman produce a syringe of unknown contents. Batman states that he knows the unknown liquid is for him, and Edgar replies that it is his very own concoction of amontillado…and it will make Batman more agreeable. Batman replies that he will make it difficult to administer, and as if on cue Edgar pulls a lever and the pendulum blade plunges suddenly towards Catwoman, just stopping short. Batman demands the swinging blade be stopped, but Edgar draws back a curtain and reveals a set of manacles attached to wall and states that everything depends on Batman’s cooperation. Knowing that Catwoman’s life hangs in the balance, Bruce gives himself willingly over to Edgar…Catwoman attempts to plead for the Dark Knight, but it falls on deaf ears.

Batman is then injected with the amontillado and is lead towards the manacles where he is shackled in. The syringe takes quick effect as Batman attempts to mutter that Catwoman needs to go free, Edgar seemingly ignores his request as he places a jester’s cap on Batman’s head, complete with jingling bells. The villains rejoice at their success, and are pleased that Batman will be spending a long time with them. Batman continues to ask for Catwoman’s freedom as Edgar picks up a trowel and starts to brick up the area surrounding Batman…all the while quoting Edgar Allen Poe.

The issue ends with the narrative flashing back to the present as Doctor Updin asks if he really had encased Batman in a brick wall…Edgar’s only response is “requiescat in pace.” Updin attempts to ask about Catwoman, but Edgar cuts things short as he finishes the session and returns with a guard to his cell.

I am really enjoying this story. I think that I may have a slight advantage since I studied some of Poe’s work in university…specifically the short story called “The Cask of Amontillado” that is referenced throughout this issue. To summarize, the story tells about an Italian nobleman that has some sort of grievance against another noble, and seeks retribution. It ends up that the nobleman lures his prey down to his wine cellar with the promise of tasting a rare vintage of amontillado (a type of wine). Due to Carnivale occurring at this time, their presence isn’t missed. The nobleman eventually gets his target drunk, and lures him to a spot where is manacled to the wall and is sealed inside as the nobleman bricks up the area around him. At the end of the story, the narrator reflects that it has been 50 years since these events, and he can still remember the jingling bells from the jester cap that his enemy had been wearing.

Now, similar to this story…Edgar acts as the nobleman and Batman as the man who gets sealed inside the wall and buried alive. Edgar even completes the scene by placing a jester cap on Batman’s head so he can hear the jingling bells after his task is complete. Like the story, it is unknown why Edgar has targeted Batman, or what his grievance with the Dark Knight is. It will be interesting to see if any of our questions get answered, as the same questions were never answered in the “Amontillado” story…specifically the question “why?”

As I have stated, I really love this story…the storyline is very intriguing and the really lends itself to the world that is being built (as I stated in my last review). Overall, I am excited to see what will happen to Batman in the next chapter…since this is an out-of-continuity story, anything can happen! And generally a few people tend to die in Poe’s stories…and the culprit tends to get away and live with the consequences of their actions.

arkham asylumbatmancatwomanlegends of the dark knight