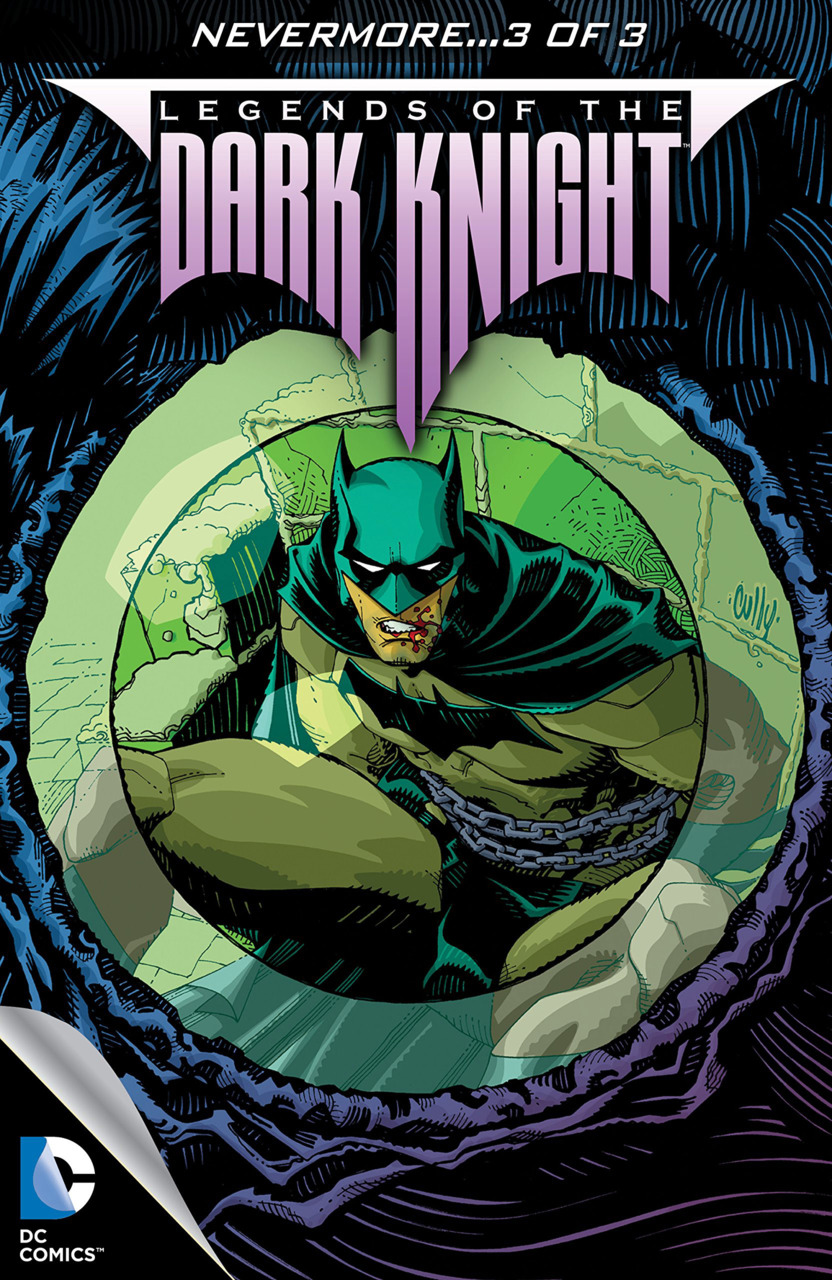 This chapter opens with a tapping noise being heard as an eye suddenly opens. Edgar sits up in his bed and asks who is there. A storm is brewing outside and a crack of lightning illuminates the room. Edgar sees a raven perched on his window sill as it flies off. Another flash of lightning shows the shadowy outline of Batman at the window. Edgar stumbles from his bed and tumbles to the floor, panting that it’s not possible for Batman to be there. He looks again and Batman is seemingly gone. The power suddenly goes out and the cell is plunged into darkness…a third lightning flash illuminates Batman standing at the cell door, but as the light vanishes so does he. Edgar continues to wonder whether Batman is there, stating that he couldn’t be…he eventually comes to the conclusion that he must be dreaming, “a dream within a dream.” A sudden whisper in his ear, “nevermore” startles Edgar as another lighting flash shows Batman inside the cell with him. Edgar sits in the middle of the room, head in his hands mumbling that it can’t be real. Batman disappears again and Edgar runs to the door, hammering on it demanding to see a guard. Updin appears suddenly and explains that the storm has knocked out the power. He mentions that he heard Edgar yelling and came to check on him. Edgar explains that he keeps seeing Batman inside the cell with him, “he’s haunting me.”

Updin ponders for a second and states that he must be feeling guilty over what he did. Edgar agrees and Updin asks about the location of Catwoman…to help relieve his guilt. We then cut over to Commissioner Gordon who is on the phone with Updin and states that he has found Catwoman where Edgar said she would be. Updin and Edgar discuss his apparent relief of guilt when Edgar suddenly stumbles upon a discovery…Updin is an anagram for Dupin, an anagram for a detective that Poe wrote about. Edgar accuses Updin of being Batman himself, but he simply responds with “do you think so, Edgar?” Edgar crumples to the floor wondering how Batman could have escaped. We then see flashbacks that Batman crushed one of the bells attached to the jester hat and used it to pick the manacle locks, and then punched his way out of the brick wall.

This story ends with Edgar quoting “The Murders in the Rue Morgue,” referencing that it isn’t for one to know the true reason behind something…even if it is impossible, “now, brought to this conclusion in so unequivocal a manner as we are…it is not our part, as reasoners, to reject it on account of apparent impossibilities. It is only left for us to prove that these apparent ‘impossibilities’ are in reality not such.” The last panels show Updin walking off quoting the famous “only this and nothing more” from “The Raven” and cuts to Batman perched on a rooftop as a raven flies by.

Well this was definitely a great way to bring back Legends of the Dark Knight. It was great to see how many Poe references could get thrown into the story. The writer clearly is drawing from “The Telltale Heart” where the killer becomes guilty over his deed and thinks he is hearing the beating heart of the man who he killed…similarly Edgar thinks he keeps seeing Batman everywhere. Then we get to the reveal of Updin has been Batman all along…truthfully I didn’t see this coming (although I should have.) In reference to the detective Dupin, he was created by Poe and was one of the first detectives every written back in 1841 in a short story “The Murders in the Rue Morgue” where Dupin solves a case of a double murder…Dupin was actually used to inspire other famous detectives such as Sherlock Holmes. Edgar will later quote from this story after he realizes that even though it was impossible for Batman to escape, it must be so. Lastly we see Updin quoting “only this and nothing more” from one of Poe’s most well known works “The Raven.”

Overall this is a definite must read, especially if you like to pick up on the references throughout this story. Well written and the art meshes extremely well with the style.

batmancatwomanlegends of the dark knight