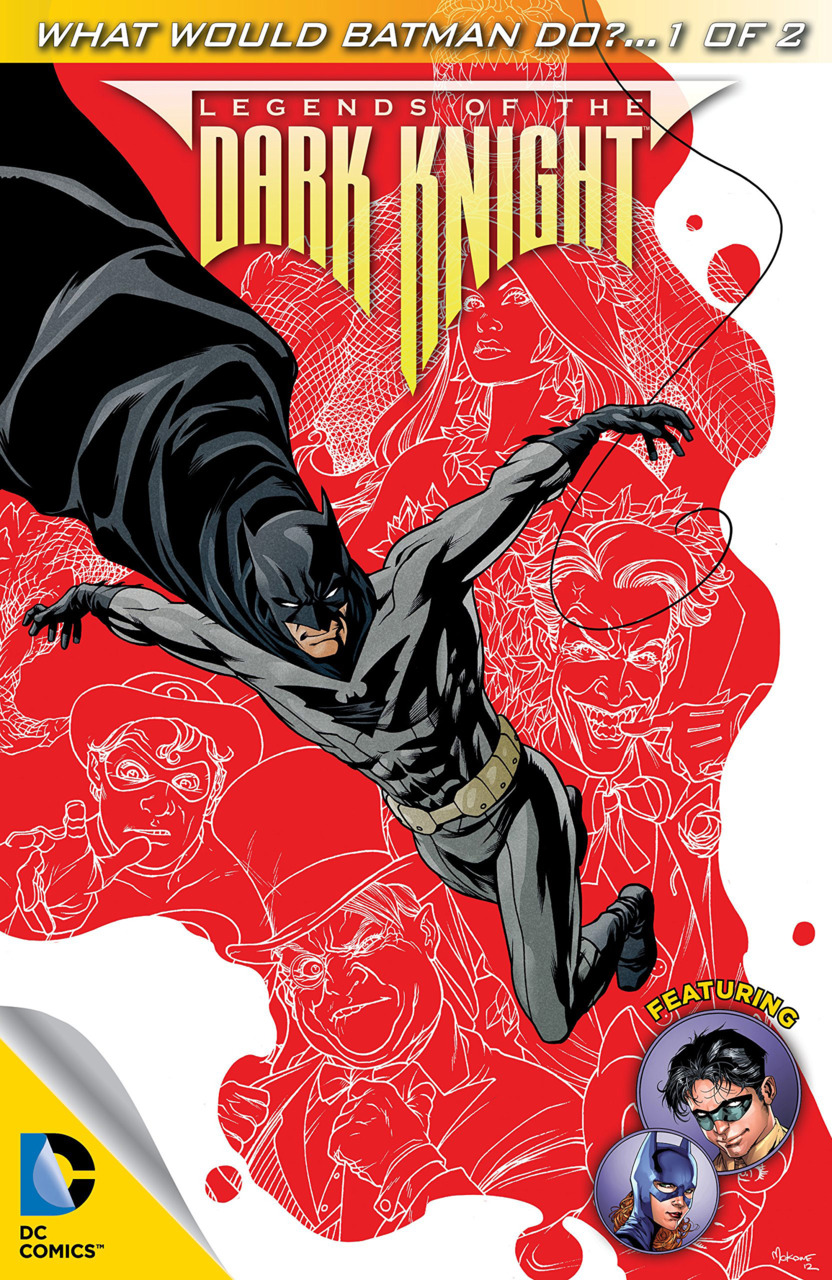 WWBD – what would Batman do? I’m sure it’s all a question that we have asked ourselves at one time or another (you can admit it). And that is exactly the question posed by Robin and Batgirl in this week’s chapter of Legends of the Dark Knight.

Our story opens with an explosion at Arkham Asylum as we see Killer Croc, Man-Bat and Clayface escape and flee the scene. Meanwhile at Wayne Manor, Dick Grayson is busy reading a comic book as he hears the news regarding the breakout…with a button push beneath the bust of William Shakespeare, a bookcase slides back revealing the batpoles. Before he can descend into the cave below, Alfred enters holding a phone and offers it to the young ward. Dick drops down that pole as he shouts that he will take the call “downstairs.” Bruce orders Dick to remain at Wayne Manor; however Dick has clearly ignored him and donned his Robin outfit and taken to a batcycle. Bruce informs Robin that he has the situation covered and Robin wonders who he might mean…Superman? The Justice League? Maybe…her?

Our scene switches to the “her” mentioned by Dick as we see Batgirl drop into the sewers below Gotham. She quickly comes across Robin who is also searching the sewers and both seemed to have come to the conclusion on “what would Batman do?” The two argue a bit as Robin thinks Batgirl isn’t ready for crime fighting but she retaliates that she was quite capable against Killer Moth. Batgirl counters his argument and asks what his plan was; Robin produces a newly created tangler grenade which he had planned to ensnare Killer Croc with.

The two begin to discuss how Batman would capture Croc, and Robin recounts the tale of Batman’s first encounter with him…one in which he used pig’s blood to lure Croc to the surface and capture him. The duo seems to come to agreement that they will be more than a match for Croc and Batgirl can use her tranquilizer darts to stun him…similar to how Batman used knockout gas.

Quite suddenly however, Killer Croc appears and engages the two. Batgirl hurls her darts but they have no effect due to Croc’s thick hide, but Robin’s plan succeeds as he lodges his tangler grenade in Croc’s mouth covering him in a goopy substance that restrains him. As Batgirl approaches, Robin triggers a trap that covers him in a net…it seems Croc had been lying in wait for them. Robin’s belt suddenly sounds, and he informs Batgirl that Batman is calling him. As she begins to cut him loose, Robin pretends he is still at home. Of course Batman sees through the lies and asks if Croc is secure…it seems he is currently flying back to Gotham via the Batwing. He tells the two to both return home and leave Man-Bat and Clayface to him.

Batgirl finally releases Robin, and the two briefly discuss their relationship with Batman…Robin is the sidekick who has to do what Batman says, while Batgirl feels like she is an unwanted team member. Robin admits that they make a pretty good team and decide to ignore Batman’s orders and go after Clayface and Man-Bat…”what would Batman do?” The issue ends with Robin and Batgirl mounting their cycles and taking off into the night.

What a nice issue. This was definitely the type of story that this series inspires…something fun and exciting and not constricted by the rules of continuity. However, this story could very easily take place within the modern stories as Batgirl even makes a reference to her battle with Killer Moth.

Their were a couple of nice touches and nods in this tale; Dick is seen reading a “Gray Ghost” comic book which is a reference to an episode of the animated series where Adam West voiced a TV show character that a young Bruce Wayne used to watch; the entrance to the batcave is a nod to the ’66 series as the trigger is hidden beneath a Shakespeare bust and opens to reveal batpoles; and finally Dick’s costume is the classic red, green and yellow…complete with pixie boots.

I thought it was really interesting to focus on Robin and Batgirl in this story…we got to see a young Dick Grayson and Barbara Gordon go out on a mission and take on some villains. I like that Batman wasn’t really present here, but his presence was still felt with the ever repeating question of “what would Batman do?”

Overall this was quite an enjoyable story and I am looking forward to its conclusion next week.