Review: Legends of the Knight 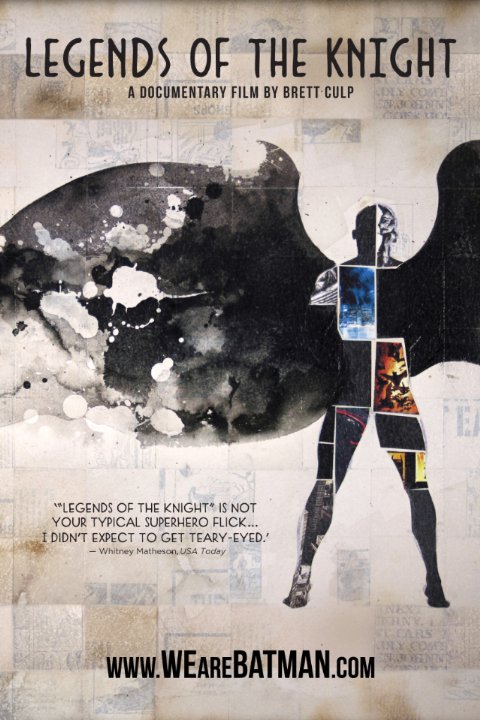 Before I start my review, I have to admit that I thought this movie was going to be a sad, depressing documentary that would make me feel bad about people in difficult situations. I had seen the trailer and thought I had a good impression of what this film was going to be about which is what a trailer is supposed to do. So I thought to myself “great, the review of the movie is done all I have to do is hit that submit button!”. Then I sat down and actually watched the documentary and realized that like every great film/documentary it isn’t one particular thing or emotion but a combination of all of them.

Even though, the documentary does have it’s sadder moments like the kid who has Leukemia or the father of a California teen who went missing talking about how Batman helped them through tough times, it’s about so much more than that. Yes, it is about people who are faced with insurmountable odds and struggles, not only is it about how Batman helps people through hard times but how it empowers people to be better to themselves and other people and to become something bigger than themselves without strictly sticking to generalizations that us Batman fans are used to reading and watching which I feel plays to the documentary’s strengths.

Another thing that plays to the documentary’s strength is the fact that there isn’t a single person in the film that’s just in there because they have the most Batman comics in the world or the most Batman action figures in the world or has seen The Dark Knight 6,000 times which not only is pointless, boring, and a waste of time but could also be made fun of. The stories are varied like a guy who runs marathons wearing a Batman cape, a guy who dresses up as Batman and visits children hospitals, or the Petaluma Batman who helps out his community.

Everyone who is in this film has a good reason to be there and I really enjoyed hearing their stories even if we didn’t stay with that particular person for too long, like right in the beginning we are introduced to a Las Vegas police officer who works in the Gang Unit and was motivated to be a police officer because of Batman. I thought his story was really interesting and would’ve liked to see more of him but he’s only in the beginning and during the final montage in the film at the end. The movie kind of leaves you wanting to hear more of his story and does it in a good way where we get an introduction, a middle, and a little conclusion of sorts so it’s not like the movie lingers on one person for too long, to the point where you feel it’s really time to move on.

With that said, and I don’t want to sound pretentious because I have no idea how movies work, I have to say the movie is edited really well, there is really no filler at all and doesn’t waste time on things that don’t seem important to Batman or the message of the film. It almost, in a way, moves a bit too fast I would say and if there is one criticism of this film I think that would be it. The movie is 71 minutes and some change and while I was watching it I was thinking to myself that I wish the filmmakers would’ve made the movie a little longer because once the opening credits are done it moves really quickly. I think with a longer running time we could slow down a bit and have some time to digest what we’ve seen because at certain points in the movie it feels a bit like those late night Sarah McLachlan ASPCA commercials that come on that you watch because there’s nothing on and you can’t fall asleep so your kind of forced to. But that aside, I think they did a great job, although I wish there was more Denny O’Neil because the footage of his interview that made it into the film was awesome and he had some great things to say about the idea of Batman but Michael Uslan makes up for it. With that said, all the stories are really well told and presented and draw you in and make you care about people who you have never met and have nothing in common with except for the fact that they share the same love you have for a fictional superhero that somehow feels real especially after watching this documentary as cheesy as that sounds.

In the end, this movie was fantastic, in fact, I would dare to say that this is one of the best Batman movies ever made. And let’s not forget that, yes, this is a Batman movie, just a different type of Batman movie. If you are a Batman fan it’s pretty much required viewing and I would highly recommend that any Batman fan watch this movie. It isn’t all doom and gloom which was one of my fears going into this movie, it’s actually a really well made, heartbreaking and heartwarming look at Batman fans that left me with a greater understanding of not only what Batman means to me but to other people and it left me with a greater appreciation for the character that I’ve been reading all my life and thought I knew.

Editors Note: Legends of the Knight releases tomorrow on DVD and can be purchased on Amazon here.

legends of the knight