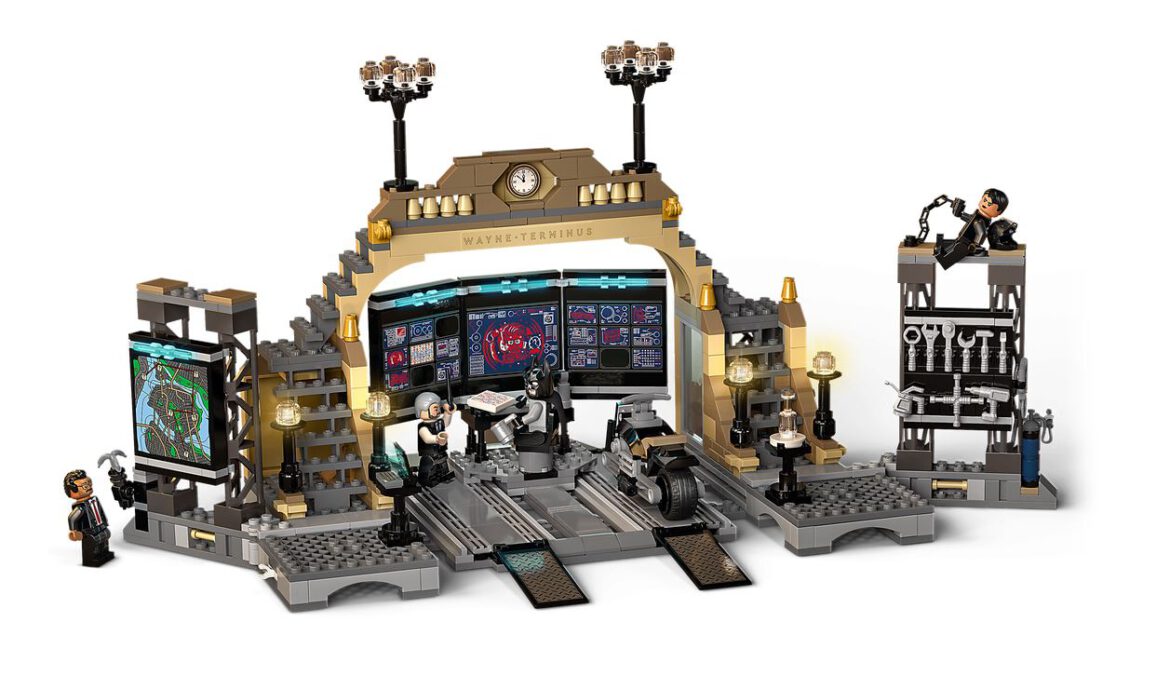 LEGO has announced four new LEGO sets coming that are themed for the upcoming The Batman film. It has been some time since LEGO has released a number of sets related to a specific DC film as in recent memory, Wonder Woman, Aquaman, and Wonder Woman 1984 each had a single set, and The Suicide Squad, Joker, and Birds of Prey had no sets (given the mature R rating, that was expected). The last films to get more than one set was Justice League and Batman v Superman: Dawn of Justice. Each of those films had three main sets. The Batman will be the first DC film to receive more than three main LEGO sets. All of the sets are set to release on November 1, but you can preorder The Batman sets now directly from LEGO by following the links below.

Super-hero fans will enjoy a thrilling challenge as they build the iconic BATMOBILE™ car in LEGO® Technic™ form. Inspired by the latest version of the BATMOBILE from the 2022 THE BATMAN movie, this highly detailed toy car building set features a true-to-life design and is packed with hot features.
Light up the night: The model includes 2 light bricks – 1 red and 1 yellow. The red light adds an awesome glow to the transparent toy engine at the back, while the yellow brick lights up the front grille. Other cool features include steering on the front wheels, differential on the rear wheels, a spinning flame, plus opening doors and hood. Kids will love exploring the model before placing it on display in tribute to their favorite super hero.
A great introduction to engineering: LEGO Technic building sets feature realistic movement and mechanisms that let builders of all ages explore the universe of engineering in an approachable and realistic way.
1360 pieces | Ages 10+
Price: $99.99
Preorder now from LEGO

Fans of The Batman movie aged 8+ can impress their super-hero friends with LEGO® DC Batman™ Batcave™: The Riddler™ Face-off (76183).
Batman’s action-packed HQ: The Batcave is equipped with computers, tools and welding gear for vehicle repairs. The 2 side walls, one with a large GOTHAM CITY™ map and the other with a tool rack, are hinged so they can be rotated into different positions for more play space. The set features 6 minifigures from The Batman movie: Batman, Selina Kyle™, The Riddler, The Drifter, Alfred and Commissioner Gordon. 3 elements containing coded messages from The Riddler can be read only when kids use the special magnifying glass to reveal the clues. When Batman ventures out on his motorcycle, he can disguise himself as his alter ego, The Drifter. And, if he returns with any villains, the Batcave even has its own jail. The playset also allows the Batmobile™ from Batmobile: The Penguin™ Chase (76181, not included) to be driven onto the ramps ready for repairs.
581 pieces | Ages 8+
Price: $79.99
Preorder now from LEGO

Kids with a passion for Batman™ will be captivated by the stand-out LEGO® DC Batman Batmobile™: The Penguin™ Chase (76181). This iconic, play-and-display Batmobile puts action from The Batman movie into the hands of kids aged 8+.
Missile-launching Batmobile: This battle-ready Batmobile features 2 spring-loaded shooters that launch mega missiles from the front, either simultaneously or individually, when kids press plates on the hood. The windshield and roof assembly lift off so the Batman minifigure can be sat in the cockpit. There’s even room for a passenger. The action can be turbocharged with the addition of blue-flame elements attached to the exhaust. The set features 2 minifigures: Batman, with a fabric cape, and The Penguin, with a shooter and hand-held rocket launcher, which includes an integrated stud-shooter that fires circular pieces. When the imaginative, super-hero adventures are over for the day, this versatile vehicle looks awesome displayed in kids’ rooms.
392 pieces | Ages 8+
Price: $29.99
Preorder now from LEGO

There’s double the fun for Batman™ fans aged 7+ with LEGO® DC Batman: Batman & Selina Kyle™ Motorcycle Pursuit (76179). This 2-motorcycle set is based on The Batman movie and is perfect for fans of fast-moving, super-hero adventures.
Batman action – on wheels! Kids take their imaginations on a thrilling motorcycle ride with Batman and Selina Kyle. With 2 powerful-looking motorcycles and 2 minifigures, plus a Batarang™, grappling gun, chain and gem element, thrilling adventures will never be far away. A glow-in-the-dark Batsignal™ provides extra inspiration for endless super-hero stories. The free LEGO Building Instructions app contains an additional digital guide, which kids can use to zoom, rotate and visualize their model. There’s also a guided real-life building process that allows even younger builders to construct with confidence.
149 pieces | Ages 6+
Price: $14.99
Preorder now from LEGO