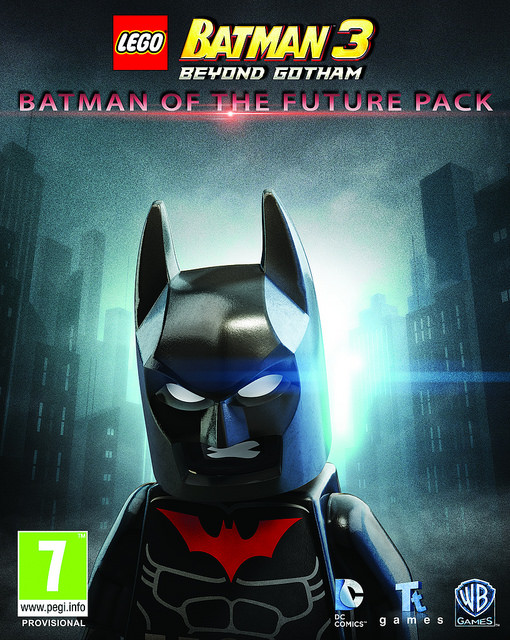 Batman Beyond is coming to LEGO Batman. Arthur Parsons, game director for LEGO Batman 3, revealed in a blog post on the European Playstation site that Batman Beyond will be DLC content.

Parsons described the DLC pack as this:

The “Batman of the Future” Character Pack allows the player to control a new Batman, Terry McGinnis, who comes fully-equipped with his technologically-advanced Bat suit, allowing him to fly, fire Batarang darts and even turn fully invisible. We are also including the retired Bruce Wayne himself, and his trusty Bat-Hound “Ace”, who can use his keen sense of smell to sniff out hidden LEGO and the ability to dig for hidden objects.

Almost everyone who plays our games loves to play as the super-villains, so the rest of the pack focuses on our favourite super-villains from “Batman of the Future”. We’ve included the humungous henchman “Bonk,” a LEGO Big Figure, and a great fun character to smash around with; the radioactive Blight, who has the ability to light up darkened areas within the game as well as being immune to hazards and fire; and the shape-shifting femme fatale, Inque who can fit through tiny cracks.

Lastly, no “Batman of the Future” character pack would be complete without the addition of two of everybody’s favourite super-villains: Mr Freeze, who not only has the ability to freeze water and enemies with his ice canon, but can transform himself into something that shall remain a secret to you all until you play as him: and the Joker himself complete with a laser gun, joker grenades, his electric joy buzzer and much more!

There is no word on whether the DLC pack may eventually be released as part of the previously announced season pass DLC pack, but one could assume it would be one of the three other DLC packs yet to be revealed.

LEGO Batman 3 is set to release November 11 on practically all systems.