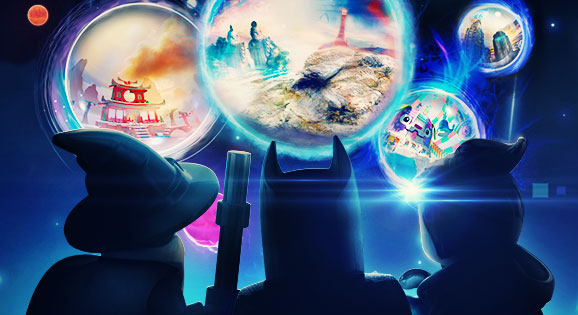 Warner Bros. and Lego have announced a new video game called Lego Dimensions. The game is similar to Skylanders or Disney Infinity in that you purchase physical toys and they interact with a video game.

Now you are probably asking how this pertains to Batman, but this game will blend multiple universes that have appeared in the Lego games, movies and products. DC Comics is one of the properties along side Lord of the Rings, Wizard of Oz, The Lego Movie, Ninjango and Back to the Future.

There was a ton of information pertaining to the game released today. Let’s start with the box art and the official details for the game.

When a mysterious and powerful vortex suddenly appears in various LEGO worlds, different characters from DC Comics, Lord of the Rings and the LEGO Movie are swept away. To save their friends, Batman, Gandalf and Wyldstyle bravely jump into the vortex to rescue their friends and fight to save all of LEGO humanity.

Let your creativity be your guide as you build the LEGO Gateway to adventure, journeying through unexpected worlds and teaming-up with unlikely allies on the quest to defeat the evil Lord Vortech. Play with characters you never thought you could see in a LEGO game together, using vehicles and weapons you never thought possible. LEGO Bad Cop driving the DeLorean Time Machine? Why not?! The Ninjago Masters of Spinjitsu fighting alongside Wonder Woman…yes, please! Get ready to break the rules, because the only rule with LEGO Dimensions is that there are no rules.

Features:
-An Extreme Cross-Over. For the first time in any LEGO videogame, characters from a mix of the best brands in the universe join forces and battle in worlds outside of their own.
-Keep Expanding. By purchasing additional expansion packs, you can grow your collection with a variety of your favorite brands to create even more crazy combinations.
-More is Better. Bring up to 7 characters, vehicles and weapons into the game all at once by dropping them on the LEGO Gateway for the most exciting and action-filled game around.
-Play Alone or with a Friend. Let your imagination guide your solo journey or have a friend join the adventure with co-operative, drop-in/out play.
-The Starter Pack Will Last. One LEGO Toy Pad and the videogame found in the initial Starter Pack will offer continued compatibility with future Expansion Packs for years to come. No compatibility chart necessary.

Next up is the announcement trailer featuring Batman and Joel McHale.

But if all of that wasn’t enough information, there are a ton of expansion packs that will be able to be used throughout the game. There are various versions of the packs all with specific things included; Fun Packs ($14.99), Team Packs ($24.99) and Level Packs ($29.99). Here are some of the releases announced.

There are more yet to be announced before the game releases along with plans for further releases into 2016. The possibilities are truly endless as to what could eventually be included in the game since most of the franchises included are Warner Bros. properties.

Finally here are some screenshots of the actual game including hints at other characters that will appear in the game.

Lego Dimensions releases September 27. So what do you think?