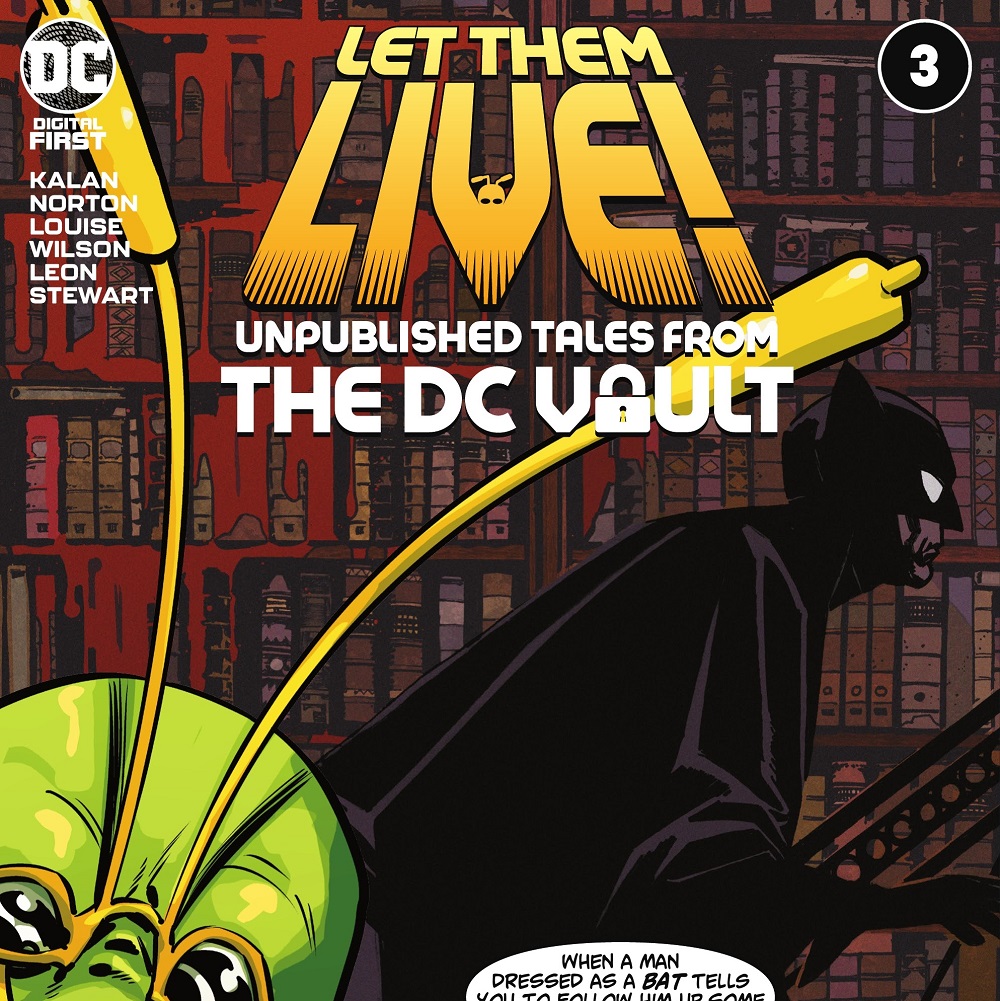 Overview: In Let Them Live #3, Ambush Bug shares an unpublished tale starring Batman and a mad bookbinder in what can only be described as a creepy and spooky tale.

The story opens with an introduction from Ambush Bug.  He is “pretending” he is a member of the Justice League by sitting at a conference table with photos of the Justice League members taped to the backs of the other chairs. Ambush Bug does admit to being a little off but shakes that off to teleport to the vault.  He is in search of a never-released Batman story and he has found one.  Batman’s about to face his most dangerous foe, reading.  That piques Bug’s interest and he and we start reading, “Flesh Made Word”.

On the rooftops, Batman finds a book.  It is a book published in 1710 and it dissolves in his hands.  The smell of the chemical coating the book takes Batman back to a place where he had spent much of his childhood, the Willoughby Z. Tchalgadjieff VII Antiquarian Library.  When Batman arrives at the library, he notices that something strange is going on.

The book wasn’t stolen but he is fuzzy from the chemicals in the book.  He is certain that someone wanted him here.  Batman walks around, there is a mystery though, twelve people are missing.  The only thing connecting all the people is their shared love of old books that you can only touch with cotton gloves.  Batman now happens to find one such book on a roof.

Batman remembers his time here at this library when he was a child.  He would stay at the library until they closed.  He would read about any subject, it did not matter what the topic was, he was eager to learn all he could.  This library is one of the oldest buildings in Gotham.  It houses the rarest books of antiquity, going back to the earliest human writings.  The library even has a tremendous collection of books on mysticism and the supernatural.

In his investigation of the building, Batman notices blueprints; someone has been moving things.  He also notices that things are a little off.  The interior walls seem a few inches too close.  There are also missing doors.  Batman does find a new door.  He enters and finds himself in a study.  On a desk, Batman picks up a book titled:  Welcome!  Please Read!  On the first page, Batman reads:  “Hi.  Thank you for your gift to the library.  THIS is what is going to happen to you.  Batman closes the book and then he hears a voice telling him to proceed to the next room.  Batman notices a smell.  He finds a dead body on a table.  The head and genitals of the body are covered with open books.  We see bottles and vials next to the table.  Batman is not the only living thing in the room.  A man that is familiar to him, a Mr. Greenwood.  Greenwood welcomes Batman.  He was not sure when Batman would arrive but he is glad that he made it.

Greenwood tells Batman about the stolen books.  Even with their security system, someone has been walking off with them.  Batman remembers that this man is C.J. Greenwood, the bookbinder.  Batman responds by saying that whenever he sees someone cheerful around dead bodies, his first inclination is to punch him so hard he only has nightmares for the rest of his life.  Bookbinder starts to assure Batman but he remembers that he did not get his name.  Batman continues to talk about nightmares when Bookbinder says that the patron, the body, is not here against his will.  Batman starts to remember a particular book and Bookbinder notices that Batman is lost in thought.  He suggests that Batman sit down and he will get him a glass of water.  Batman responds that he does not need Bookbinder’s water.  He wonders why he called him that.  Greenwood picks up on the name and says that he does many things other than binding books.  Greenwood asks Batman if he knows him.  Batman names another book he liked.  Greenwood knows the book.  Batman tells Greenwood that anatomy is a passion of his.  Greenwood agrees that the human body is fascinating and a lot like books. Greenwood tries to end this interaction with Batman.  Greenwood mysteriously says that Batman met the donors and what he does is not pleasant to see and it’s messy.  He does keep order and wishes Batman a good day and leaves.  Batman tells Greenwood that he thought the chemicals would make him more submissive but he is not a normal person.

The memories of the library keep coming back to Batman.  He remembers Mrs. Hostetler and Mr. Szekelely.  Hostetler had a haunted look in her eyes and Szekelely had acquired a collection of writings from mass murderers and serial killers.  Both of these librarians disappeared.  Batman realizes that he has found the missing people.

Batman is looking at books he has never seen, the books are centuries old but the bindings are new.  He remembers that one of the holdings is a small collection of anthropodermic bibliopegy, books bound in human skin.  Batman remembers that Greenwood told him that this patron was not here against his will.  Sometimes a dying person would donate their skin to an author or a bindery so they could live forever.  Sometimes murders are not murders but rather suicides.  Greenwood however has been murdering people and using their skin for book bindings.  Batman almost goes numb and it takes him a minute to get his bearings.  Batman admits that all of his sleep could be described as naps and he has donated a lot of money that was going to something sinister beyond comprehension.  Third, this place was his safe place.  Finally, he decides to give Bookbinder a head start.  Batman decides that this is his library and Bookbinder has perverted his sanctuary into something nauseating and vile.

Batman starts his pursuit.  Bookbinder tells Batman that he has imagined his scared skin and it would be great to bind a 1766 volume on surgical techniques for non-domesticated vertebrates.  All the people he has killed are able to live forever.  He uses all types of parts but he is still trying to figure out how to get a face to keeps its form after it has been removed and stretched.  He asks Batman to let him go.  He could offer him a history of Gotham that only has one written copy.  It appears that the only way to read this book is if it is bound with his own skin.  The chemicals in his skin are the only thing that can make the written ink visible.  This book can show Batman secrets he has only imagined.

Batman finds Bookbinder on the roof.  Batman says no to Bookbinder’s proposal.  Bookbinder assumes that Batman thinks he is weak because he is old.  He tears off his shirt to reveal that he took some of his own skin for his books and he replaced what he took from himself with pieces of his victims.  Batman punches him in the face.  He tells Bookbinder that he corrupted his safe place.  Bookbinder says that not everyone sees corruption.  One woman, Jocelyn Mipps, a math teacher saw impossible geometries as she died.  Batman interrupted him by saying that she was a mother.  Bookbinder dares Batman to throw him in Arkham.  Bookbinder tells Batman that he can figure out who Batman really is, the other residents of Arkham would love to learn that information.  Batman tells him that it will be easy for him to throw Bookbinder off of the roof, there is no awning or dumpster to break his fall.  He can even aim so that Bookbinder will hit a hydrant at full speed.  If he lives, Batman will just drag him back up and try again.  Batman bricks the old man up and throws him off the roof.  He uses a bat grapple to catch Bookbinder’s leg leaving him dangling in front of the cops.

Ambush Bug tells us that that was a creepy story.  It had a maniac who dwells in the shadows, only emerging to inflict grievous harm as part of some sick mission, and that was the hero.  This story will make him think.

Analysis: I actually agree with Ambush Bug, this story is creepy and makes one think.  It is for that reason that I liked this story.  This story had a definite element of horror but it was a psychological type of horror that even though the thought was gruesome, the book itself was not gory.  There is very little blood depicted, with only the blood after the killing and Bookbinder’s bloody nose.

This story definitely makes me think.  It makes me think about passions and where I want my legacy to go when I finally die.  I for one do not want my skin to be a book’s binding but it might be nice to write a book, even if the said book is not published.  That would be leaving a true legacy, a legacy of thought.

Throughout his beating of Bookbinder and before in his thoughts, Batman talked about the value of knowledge.  Bookbinder himself mentions the value of the information of who Batman really is as being very high, especially to the inmates of Arkham, Batman’s biggest enemies.

This was definitely a thriller for the mind.

The art by John Paul Leon was appropriate for this topic.  It had a crime noir feel to it as Batman himself is being a detective first and an avenger last.  The only complaint I had with the art unfortunately is Batman’s design.  I would have liked his ears to be a little bit longer, they appeared to me to be too short.  Other than that small complaint, I enjoyed the art.  It was appropriate for an old library and the artist was incredibly detailed in all of his panels, showing ladders, books, and chemicals throughout all the panels.  There are very few panels that do not have background images and that makes it a feast for the eyes.

This is a spooky and thrilling tale worthy of a Batman story.  This is why I like the Batman character. If released in print, I may add this to my personal collection.