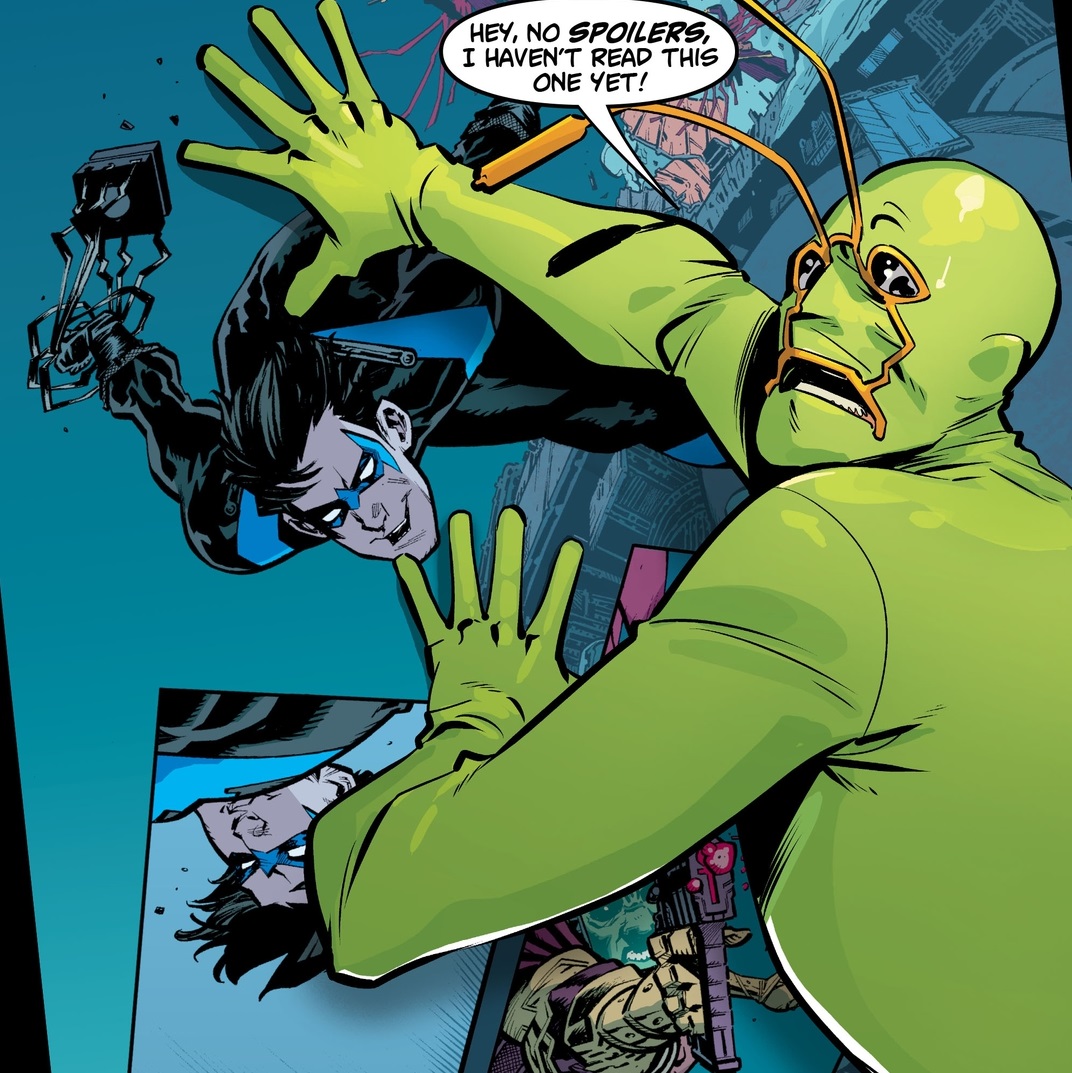 Overview: In Let Them Live #2, Nightwing fights the Order of St. Dumas in 30,000 feet of freefall!

Synopsis (spoilers ahead): “Without A Net” by writers Jackson Lanzing and Collin Kelly and artist Jorge Corona

Aboard a huge satellite created by the Order of St. Dumas, Nightwing steals the deadly Graviton Bomb and jumps from 30,000 feet over coral atolls without a parachute. Pursued by deadly members of the Order, including the robotic vessel of St. Dumas himself, Nightwing steals one of their jetpacks and gets a call from Batgirl in Dubai. Batgirl is destroying the servers of St. Dumas, and she lets him know that if the bomb touches the ground, it will destroy the Earth.

The robots manage to steal the bomb back, and Dick Grayson boards a passing propeller plane, giving the pilot his jet pack, and using the irreparably damaged craft to dive towards his enemies and the bomb. Cyborg gives Dick a call, having disabled the Order’s control network, and Robin also checks in, having destroyed the amplification array. Dick abandons his ruined plan, rips off his robot attacker’s arm, and manages to destroy it – but the bomb is now armed. Nightwing attaches the bomb to the second jetpack he stole and abandons it to explode in helpless fury above the water – towards which he now falls, 200 feet of deadly acceleration. Speaking with Batman as he falls, he reveals that he knew this was the likely outcome of his plan, which was why he took this part of the mission specifically – because he was the best at falling. He manages to hit just the right part of the deadly coral atolls – where there’s just enough water to absorb the energy of his fall, and Dick and Bruce exchange warm sentiments as Dick floats in the warm tropical waters of the world he saved.

Analysis: Jackson Lanzing and Collin Kelly, a writing team who did several fill-in and collaborative arcs for DC starting in the DCYou era (2015), created this issue of Nightwing most likely between the end of Tim Seeley’s Rebirth run (as the Nightwing suit is clearly the thin blue line version of that era) and the start of the dreaded “Ric” era. That Nightwing run had a lot of fill-in arcs and issues, and this story was probably designed to fill a slot in case the regular creative team couldn’t finish their story for the brutal twice-monthly schedule.

In Let Them Live #2, the use of the Order of St. Dumas and their Batman and Robin Eternal high-tech incarnation, primarily seen in Kelly and Lanzing’s issues of that weekly series, also develops the concepts of the post-Flashpoint shadow society further. It doesn’t quite connect with what Tynion did with the Order in the “Intelligence” arc of Detective Comics, with the deadly artificial intelligence Ascalon, nor the cult of Azrael seen in Justice League Dark, but it’s a fun wrinkle in the murky myth of St. Dumas. The threat of the Order’s Graviton Bomb is set up and neutralized, along with many of their powerful robots, making this issue all the more obviously an “inventory” or “filler” issue, but it’s really good to see writers taking elements that they developed earlier in their writing and using it for further stories, giving the DC Universe a more connected feeling.

Jorge Corona’s last major Gotham work as the main artist was for We Are Robin – his intensely appealing, exaggerated style working well for the youth-oriented nature of that series, and it works well here for Nightwing’s frenetic freefall energy. Little details like the cross-shaped emitter of the robotic guns of the Order of St. Dumas, or the Heads Up Display in Nightwing’s domino mask giving him calculation data give this story a lot of fun, making it feel more than just an intense adrenaline romp. Colorist Matheus Lopes (sometimes credited as Mat) gives Corona’s cartoony linework a beautiful, high-energy palette that enhances the characters and action without ever overwhelming or distracting. Though sometimes Lopes’s work has bothered me for its relatively flat, low-intensity effect such as in the Rebirth Batgirl title, it’s much better suited to this story, with the colors much more saturated and rich, ranging from the terrifying explosion of the Graviton Bomb to the gentler tropical hues of the ocean. Artistically, this story would have been a true delight to add to the Rebirth Nightwing run.

A brief note on the framing story for Let Them Live #2 by Elliott Kalan and Mike Norton – Ambush Bug takes a break from silly jokes about him joining the Bat-Family to mention that the original context for this Nightwing issue was when “Batman was less of an angry loner, and more the vigilante dad of a whole Brady Bunch of angry loners.”

A story with intense, adrenaline-junky thrills, tying into the Order of St. Dumas from “Batman and Robin Eternal,” set in the middle of the Rebirth Nightwing era (before Ric!), with exuberantly appealing art by Jorge Corona, “Without a Net” provides really solid action and character beats throughout.