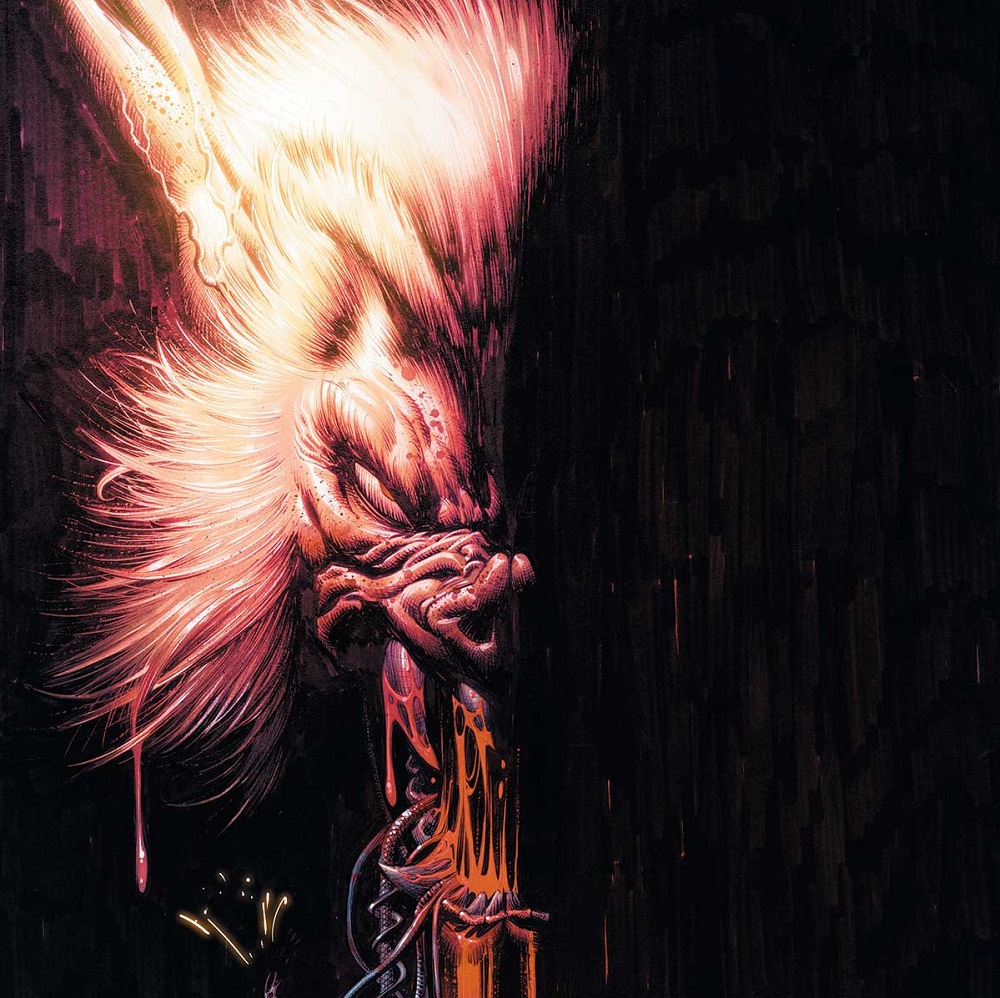 Overview: In Man-Bat #2, Kirk Langstrom tries to save himself from death.  He is interrupted by an attack by the Suicide Squad and a therapy session with Harley Quinn.

Synopsis (spoilers ahead): We open with a flashback.  Kirk and Francine are on the roof of an old two-story cabin presumably outside of the Gotham City limits.  We see Kirk talking about his childhood and his family.  Kirk’s sister Lisa is estranged from Kirk.  They do not see each other very often, as she was getting tired of Kirk trying to “fix” her.  Their conversation is interrupted by two eastern red bats.  He muses that he used to come up there and watch the bats hoping that someday there would be someone out there that he could fly with.  Francine kisses him on the cheek.

The scene shifts to the present. Now Kirk is inside the cabin studying dissected bats in hopes of finding either a cure or a way to reverse the damage that he has done. Kirk, however, is not alone.  A scope has locked on him as a target.  It is Deadshot.  Deadshot is reminded by Rick Flag that he is not to shoot to kill, but, according to Floyd, he is to shoot to annoy. The plan is to draw Man-Bat out and then smash and grab. Captain Boomerang and Killer Croc are to grab and Harley Quinn is to smash.

Inside, Kirk is hitting a wall. He is watching Langstrom fade away, and the Man-Bat cells are winning. There is one dangerous option. Kirk opens a briefcase and a bullet flies by. Soon the room is riddled with bullets. Langstrom looks out the shattered window and sees Deadshot in the trees. Man-Bat emerges and flies out the window as Deadshot fires, wounding him in the shoulder. Deadshot jumps out of the tree as Man-Bat is hit by exploding boomerangs. Man-Bat hits the ground and stands only to be hit by more razor boomerangs.

Now Croc stands over the wounded Man-Bat.  He steps on the wounded creature as Rick Flag arrives. Man-Bat realizes who is attacking him and guesses that they are there to turn him into a soldier like they are now.

In Gotham, we run into the “jerks” who were trying to steal the sonic cannon from the last issue. Gas floods the room, and the two in the room start to see an army of Man-Bats approaching. We learn that the mastermind is none other than the Scarecrow; he poisoned the two thugs with his fear toxin as punishment for their failure in the last issue. Scarecrow realizes that the cannon is too damaged to use, but he plans to reassemble the cannon. First, he needs some help from experts on sound. He needs Langstrom.

Speaking of which, the Suicide Squad minus Harley are landing over the wounded Man-Bat. The creature is far from helpless as he kicks Croc off of him. Croc is not down, he attacks, shouting that unlike Langstrom, he is always a monster. He tackles Man-Bat and pushes him in the nearby lake. Now he holds the creature under the water. Man-Bat is able to knock Croc off, but Croc counter strikes.  Flag tries to contact Harley. Man-Bat flies out of the water and swoops down to grab Rick Flag. He throws Flag into Deadshot and Captain Boomerang, knocking them all on the ground. Man-Bat finds Digger and demands that he remove the boomerang out of his body. Afterward, he knocks Boomerang out leaving all three Squad members unconscious.

Back inside the lab, the creature grabs a vial, but shatters it in his hands. Man-Bat snorts that he is unable to do anything right. A woman comes in, agreeing with him. Man-Bat thinks it is Francine but instead gets knocked out by a mallet. He is dragged upstairs, placed on a couch, and Dr. Harley Quinn takes a seat and waits for the monster to awaken for a nice therapy session.

Analysis: The primary focus of this issue is the action element. What I miss most is the addiction angle that was referenced in the first issue. I hope that that may be revisited now that Harley wants to have a one-on-one therapy session.

I really was not too crazy about the art in this issue.  I really did not like how the characters were drawn, especially during the fight with the Suicide Squad. The characters do not seem to be drawn to form.

I particularly liked the interaction with Killer Croc and Man-Bat. The two appear as opposites. Man-Bat is trying to maintain his humanity while Croc let that part of him die and fully embraces the monster that he is. This gives me some hope that Man-Bat can be redeemed as a character and not seen as just a monster.

I missed the addiction angle of the previous issue, and that lack of connection in Man-Bat #2, for me, just makes this an okay follow-up issue.