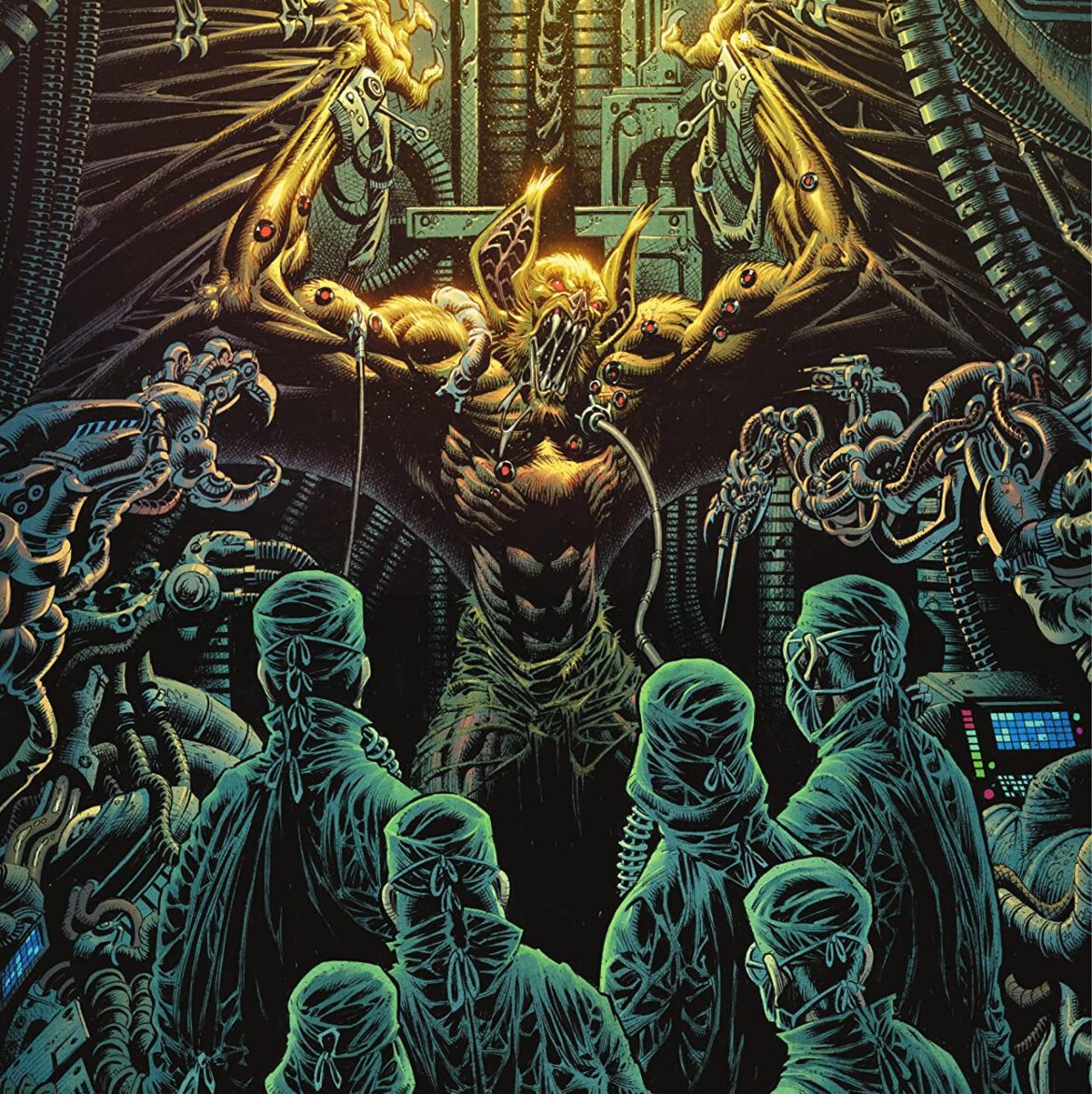 Synopsis (spoilers ahead): Harley Quinn has Man-Bat, but she appears to be acting alone. We open Man-Bat #3 with the fantasy of Man-Bat being the hero, and Harley brings him back to reality. She tells Man-Bat that when he escapes the squad, the government is going to resort to plan B. They will send in the big guns and when they nab Kirk, things will be different. The government will study Kirk Langstrom, including performing a living autopsy. Not even the Batman will be able to find him. Rather than let this happen, Harley has other ideas.

She injects Man-Bat with a serum that changes Man-Bat back to Kirk Langstrom. She is not afraid of Waller blowing her brains, but she is concerned that Enchantress and Katana will be mobilized to bring Kurt in. Harley releases Kurt and then sets the scene for a massive fight, a fight in which Kurt escapes and is gone before the backup can arrive.

The scene shifts to Blüdhaven. Francine is exhausted. She has finished reading the news reports detailing the hunt for the Man-Bat, but she soon finds that she is not alone. Scarecrow is there, and he is not after Kurt but her.  He attempts to gas her, but Francine is able to fight back and is instead taken down by Crane’s thugs. They take her to the van.

Fifty miles north of Gotham, Lisa Langstrom has an unwelcome visitor. Kirk is waiting for her at her doorstep. He signs a greeting to her, and she gets him inside before they can get arrested. Francine previously had brought Lisa up to date, and Kirk insists that he needs a place to stay and time to come up with a plan to fix this situation. Lisa agrees and hugs him, after all, she is his sister.

At Francine’s apartment, the police leave, and the Batman arrives. He quickly discovers that Crane is behind her disappearance.

Kirk showers, shaves, and starts to work. At first, things are going great. He develops a chemical that he says can repair the cellular damage he did to the people in Gotham, but he needs to test it. He also thinks that this can cure Lisa’s hearing, and he wants to test it on her. She does not need or want Kirk to try to fix her, and she throws him out. The two start to argue, and Scarecrow forces himself into Lisa’s home. Kirk changes to Man-Bat, but Scarecrow is able to subdue him.

Kirk now wakes up in a lab with Francine.  They are working together for the Robbins Center to get the sonic cannon fixed, however, this is only a fantasy. In reality, Francine is with Man-Bat and the two are working for Scarecrow to fix the cannon.

Analysis: Once again I miss the addiction angle seen from the first issue.  I think that the angle is being dropped, but there was some good character development in Man-Bat #3.

I want to mention Harley Quinn. Once again she proves to be a wild card. She never had the intention of working with the Squad to bring in Langstrom. She knows what Waller will do, and Harley’s goal was to set Man-Bat free from the start. She tells Kirk that she does not think that Kirk is bad to the bone, but he is heading there unless he makes some changes.

The new character we finally meet in Man-Bat #3 is Lisa, Kirk’s sister. Up to now, we have only seen her through Kirk’s eyes. This issue opens us to who she really is. She is a loving member of the Langstrom family, but she does house a lot of pain towards Kirk. Unlike him, she accepts who she is and just wants to be accepted by those she loves. At first, possibly out of desperation, she sees Kirk and believes that he wants to undo the pain he has caused, but soon she learns the truth. I particularly liked her statement when she tells Kirk that she is not broken and instead she has grown to like who she is. She is not helpless, she can sign and has developed the ability to read lips, so she is not alone and entirely helpless. I hope to see more of her in future issues.

Scarecrow here shares a little more about his own end game. He wants to upgrade his weapons. In addition to his fear toxins, he wants to use the sonic cannon to create sonic subliminal messages. He needs a Langstrom, but it is Francine, in addition to Kirk, that he needs to fix it.

The art here is okay.  The style is starting to wear on me a little, but it is good in its depiction of Scarecrow. I particularly liked the coloration in his eyes that give them the appearance of glowing. Artist Sumit Kumar does a great job in depicting the appearance of Scarecrow to those he has gassed. Kumar really creates a fearful appearance.

I miss the addiction angle that was dropped in this storyline, but finally meeting Lisa makes up for that loss for me. The art continues to be good in Man-Bat #3, excelling in depicting the horror elements of this story