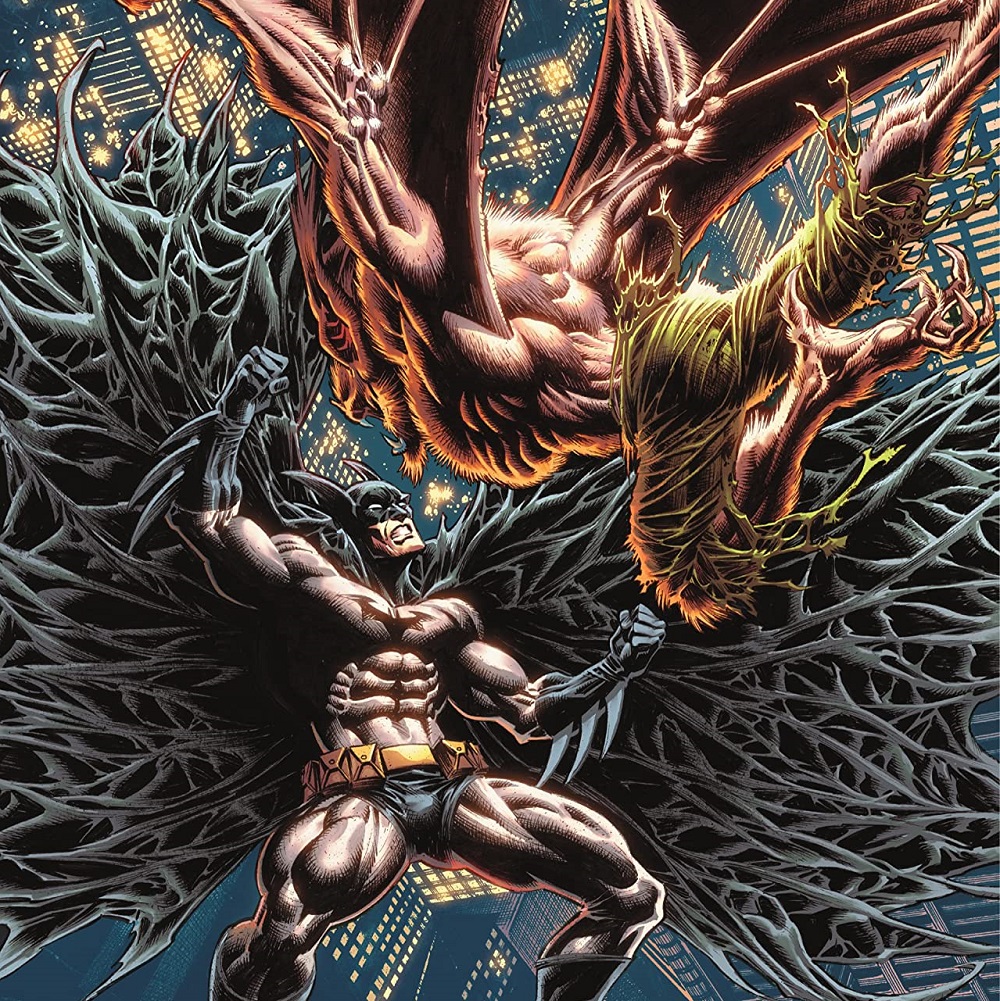 Overview: In Man-Bat #4, Scarecrow uses Kirk and Francine Langstrom to repair the sonic cannon, which is used against Batman who is then forced to face a Man-Bat on Venom.

Synopsis (spoilers ahead): The book opens with Man-Bat voicing over Francine. Man-Bat is working on repairing the sonic canon.  We see alternating views. One view is reality, the couple, Francine and Man-Bat in the run-down warehouse, and the other view is Francine and a human Kirk Langstrom enjoying life. Man-Bat has to end this, or he is dead.

In the Batcave, Batman and Alfred discuss the case of the missing Francine Langstrom. Batman knows that Scarecrow is behind this, he just does not know where he is. Batman decides to track down some of the other Blackout Gang members and persuade them to tell him where Dr. Crane is hiding.

Dr. Crane decides to check on the Langstroms’ progress. Man-Bat tries to regain control of its shared body with Kirk and collapses. Crane checks on him, and Man-Bat is able to regain control. Man-Bat grabs Crane and slams him into the wall. Francine thinks that Kirk is doing this and tries to remove Man-Bat’s arms from Crane’s throat. Crane reveals to Man-Bat that he knows what his proposed “cure” is. Man-Bat releases Crane, and the Kirk psyche takes over again. Francine tells Kirk that he attacked Dr. Crane, but Crane says it was just stress and suggests that the two take the rest of the day off.

Crane leaves and confronts his two gang members that are still deaf from the sonic attack from Man-Bat #1.  The gang members give Crane his mask, and he becomes Scarecrow once again.  He needs to increase the urgency of the Langstroms’ subliminals to keep Man-Bat in control.

Batman finds the gang member he was looking for and “convinces” the man to give up Scarecrow.

Man-Bat realizes that the subliminals have been increased, which triggers violent arguments between Kirk and Francine. In one last-ditch effort, Man-Bat destroys the subliminal speaker and frees himself and Francine from Scarecrow’s illusion. Francine realizes that she has been with Man-Bat and not her husband. Man-Bat tries to get Francine to help him dismantle the sonic cannon. She reluctantly agrees to help, but she wants to see Man-Bat in a cage afterward.

Batman arrives as Francine and Man-Bat discover Scarecrow has the cannon. Batman attacks Scarecrow, and the two Blackout Gang members attack Man-Bat and Francine. Scarecrow fires the cannon at Batman just as he throws an electrified batarang. The gang members attempt to destroy Kirk’s cure, but Man-Bat is attacked by a compromised Batman who attacks the creature instead of pursuing Scarecrow.  Man-Bat injects himself with the cure, revealing that it is Venom, and he hulks out in front of Batman.

Analysis: Everything comes to a head in Man-Bat #4. Scarecrow gets his cannon repaired, and Batman arrives and is compromised by the cannon, which sets the stage for a venomized Man-Bat versus Batman.

The art is really good in Man-Bat #4. I liked the juxtaposition of the Langstrom’s in Scarecrow’s illusion to the reality of their situation.  For example, when they think they are watching television, they are really watching a blank board.

In a callback to the original plot point of addiction, Scarecrow tells Man-Bat that he and Langstrom are codependents. I liked the psychological angles in this story. We get the Langstrom’s becoming more agitated with each other even to the point of violence.  When Batman is hit by the cannon, Man-Bat realizes that the cannon brought out all of Batman’s worst impulses and amplified them. Man-Bat is not a mindless monster in this issue. He actually becomes our eyes and describes to the reader what is happening from a psychological viewpoint.  I like the intelligence of this writing and storytelling. It is more than just characters punching each other repeatedly.

This issue brings back more subtext and intelligence to the story, and I am happy to see that. Because of that, I'm looking forward to the final issue more than any other point in the series.