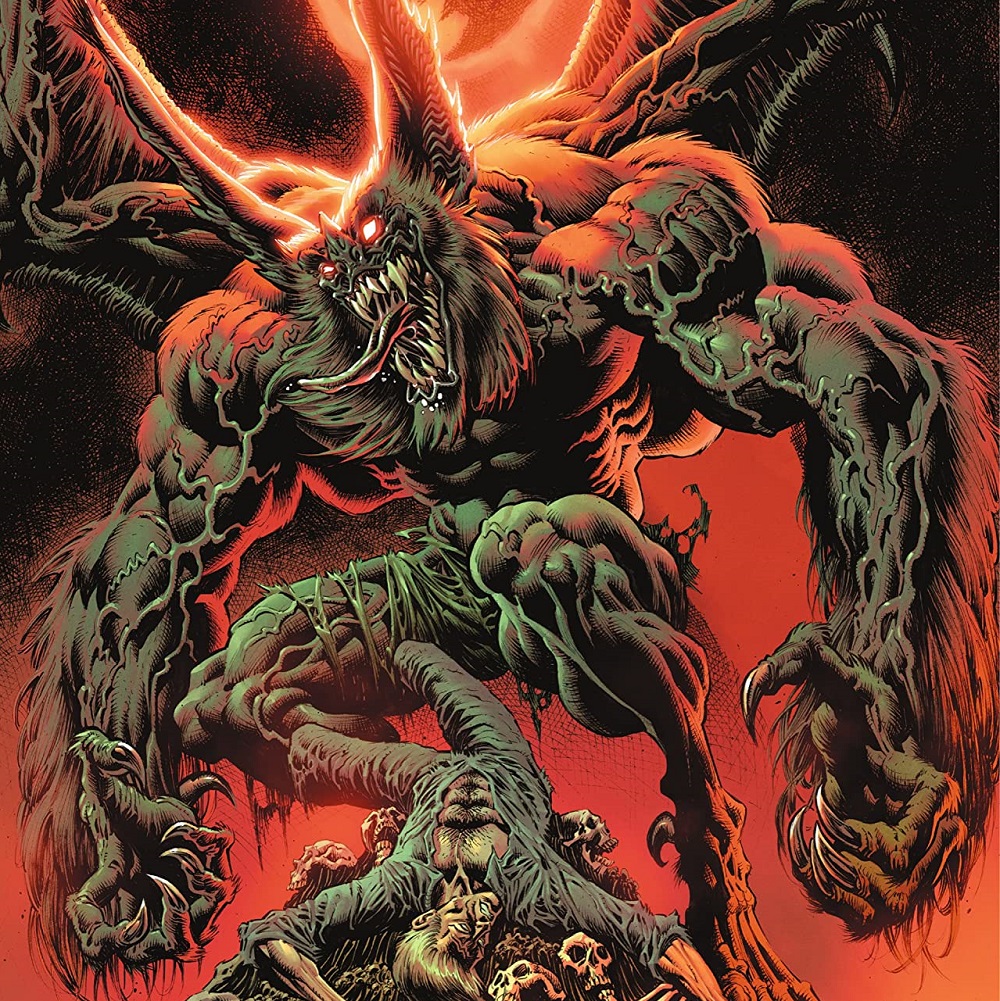 Overview: In Man-Bat #5, Batman and Man-Bat fight to see who the true Bat of Gotham is. Scarecrow moves forward in his plan, but is foiled by Francine and Kirk Langstrom finally working together.

Synopsis (spoilers ahead): As Man-Bat #5 beings, Scarecrow regains consciousness, finding a batarang stuck in his shoulder. He discovers that the sonic canon worked, and Batman has been compromised. He also realizes that Man-Bat has exposed himself to venom as well. This is terrific for Scarecrow.

Francine Langstrom finds a gun on the ground and picks it up. The fight of the bats is not the only fight going on. A more important fight is going on inside the mind of Man-Bat. Kirk Langstrom and and the creature inside are dealing with their own struggle. The two are dying. The venom is not stabilizing their cells. There is a panel that shows various scenes of this story including the Batman, the police, Harley Quinn’s “therapy session,” and Francine leaving. It is all fading away; Kirk is dying. The fight between the venom Man-Bat and Batman takes to the skies.

Scarecrow, meanwhile, heads trait to the GCN station with his canon. He is not alone; the armed Francine hitched a ride and now she is pointing her acquired gun at Crane. Francine takes the shot and grazes the villain. Crane, still holding his canon, uses it to play a subliminal song to infect the bystanders and give them the suggestion that Francine is the true villain. The people attack her, and she flees.

The bats continue fighting, and inside Man-Bat, the internal struggle continues. Man-Bat and Kirk’s two consciousnesses start to merge. The two allow this to happen, so Man-Bat can take the control he needs to win the fight outside. Man-Bat now throws Batman, which forces the attacking Batwing to divert to catch the thrown Dark Knight. Man-Bat is now able to search for Scarecrow without distraction. He is able to detect the subliminals Crane released and finds the mob chasing Francine. Man-Bat swoops in and rescues her by taking her into the sky. He drops her onto a roof and flies off with Francine yelling at him to stop. He finds Scarecrow and grabs him, just then the melding of the two personas is complete and a new lucid Man-Bat is shown, smaller and holding the sonic canon with an unconscious Scarecrow on the roof of the TV station.

Kirk returns to Francine with the canon. The two recalibrate it, and Man-Bat takes to the skies to undo the damage Crane has caused. Batman and the mob are all freed of the subliminal suggestions. Batman, Man-Bat, and Francine are now all on the street, and the police arrive to pick up Kirk. Kirk decides not to run, but Francine also decides not to return to Kirk. Kirk realizes now that the serum never created his problems, they came from inside himself all along, and now he has to atone for his sins. Kirk allows Francine to leave and surrenders to the police.

Months later in Blackgate Penitentiary, Kirk has a visitor. Wonder Woman has a proposition. Kirk will be released if he joins the Justice League Dark team that she is putting together. Kirk agrees to finally tell the truth, and the story continues in Justice League Dark.

Analysis: The art here in Man-Bat #5 is finally growing more on me. I accept the art and some of the weirder designs. It does fit with this type of story; there is an element of otherworldliness and horror, and that fits with this art. I particularly noticed the lettering here, especially when dealing with Man-Bat. The venomized monster speaks with a black speech bubble with green text and bordered by green, which is visually striking. When the speech of Langstrom is shown in the outside world during this sequence it is in a lighter brown box while the Man-Bat thoughts are visualized in the darker brown box.  For the scenes depicting the mind of Langstrom, the speech bubbles of Kirk are normal while the bubble of Man-Bat has the irregular border around it, which continues after the two personas finally merge.

The story in Man-Bat #5 is great. Even though the addiction angle was dropped, the writing still puts personal responsibility on Kirk Langstrom and not the monster or the serum. It is this responsibility along with his intelligence that will make him a great addition to the Justice League Dark team. Kirk, even in his new form, continues his research on hearing, and that gives him a new mission in his life. He is not just looking at “fixing” his sister or himself anymore. He is truly willing and able to face the truth.