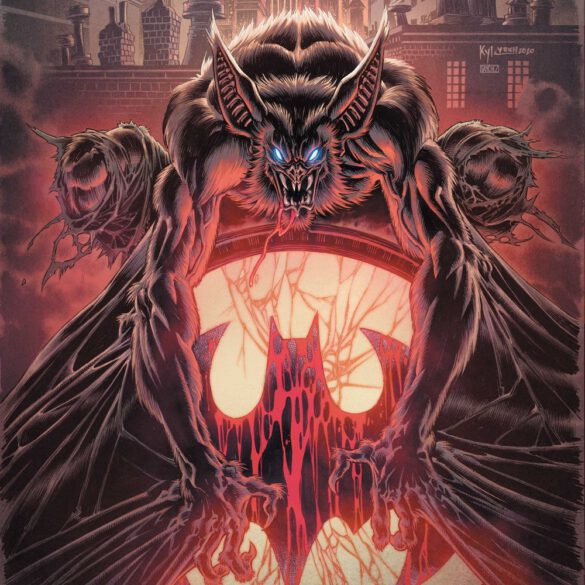 Overview:  Kirk Langstrom struggles with his addiction to Man-Bat, which presents an issue as he believes he can be a hero if he remains Man-Bat.

Synopsis (spoilers ahead): In Gotham City, Francine Langstrom confronts her husband with the Man-Bat serum. Kirk insists that he is working on something and that he is close. She goes to the bathroom to flush the serum down the toilet, but Kirk grabs her and snatches the vial from her.

Francine admits to Kirk that she found the serum weeks ago, and she waited for him to come clean about it. Francine realizes that Kirk loves being Man-Bat more than he loves her. She taunts him by asking how it feels to abandon his research to help the hearing impaired like her sister. Now he is just a junkie. Kirk retorts that the serum will help his sister, Lisa, himself, and others.  Scientists fail until they get something right. Francine ends the argument by telling him that she is leaving. She started moving her things out when she first found the serum.

Alone with his thoughts, Kirk takes the serum and transforms into the monstrous Man-Bat. He will show Francine and everyone else what Man-Bat really is. In the skies of Gotham, Man-Bat with the aid of his bat sonics, hears a noise. He flies to investigate and finds masked people loading a cannon into a van. He approaches. The men rush off in the van with Man-Bat in pursuit. They are not alone,  Batman has also arrived on the scene and attacks Man-Bat with his batarangs. Man-Bat insists that he is there to help while he thinks of Batman as a pretender and is mocking the bat with his costume. Batman does not understand the power of the bat. Batman tells Kirk that he will deal with the Blackout Gang, but he needs Kirk to calm down. Instead, Man-Bat thinks that Batman just wants to steal his glory. Man-Bat grabs the van and flips it over, totaling the vehicle. The gang pulls out the cannon. Batman realizes that the gang is desperate, but Man-Bat insists that he can and will stop them. The gang fires the cannon, and Man-Bat falls to the ground as the police arrive. Batman calls the cops off. Meanwhile the gang continues to fire on Man-Bat until the cannon explodes, breaking windows and blowing out people’s ear drums.

Kirk Langstrom wakes up strapped to a table.  Batman took him to one of his facilities before they could arrest him. He wanted the police to take Langstrom in as a man and not the monster. Batman tells Kirk that the serum has done irrevocable damage to his cellular makeup. Kirk’s continued exposure to the serum has mutated his cells. Man-Bat is taking over Kirk Langstrom, and it is killing him. Kirk insists that he can perfect the serum and then stabilize his condition.

For years, Batman has kept Langstrom out of Blackgate because he believed that Kirk had the capacity to get his life back on track.  Batman admits that he was wrong. Man-Bat caused millions of dollars of collateral damage and a hundred people were injured. Some are still in critical condition, and on top of that, the Blackout Gang got away. Langstrom is quiet now and finally says that was not what he meant to do.

Langstrom pleads with Batman to set him free; he can find a cure. If he is prison, he will not be able to. He believes he can be both Kirk Langstrom and Man-Bat. Batman sent Langstrom’s blood work to the best biochemists in the field. They concurred with Batman’s findings. He will continue to find a cure but Langstrom must go to Blackgate. The police transport arrives to take Langstrom to Blackgate.

While in the transport, Langstrom talks to the beast in his head. Neither wants to die, and the beast asks Langstrom to try and fix this situation. If he cannot, they will die free and not behind bars. Langstrom once again changes into Man-Bat and breaks out of the roof of the transport and flies away.

The scene shifts to Belle Reve Penitentiary. A United States senator has contacted Amanda Waller. She admits that she has been watching Langstrom for some time. She knows plenty about cleaning up Batman’s messes. The Suicide Squad will bring in Man-Bat.  We see Harley Quinn, Deadshot, Captain Boomerang, and Killer Croc in training.

Analysis: For an introductory issue, this issue was good. I want to look at the art first. Overall, I liked the art, and the best piece for me was the cover by Kyle Hotz and Alejandro Sanchez showing Man-Bat on top of the Bat-signal with blood covering the signal. I particularly liked the glowing eyes of the Man-Bat, and the feral look in his face.

Throughout the issue, Langstrom being considered a junkie is constantly alluded to. Francine even says at one point that he is addicted to being Man-Bat. With that thought, the visual depiction of Kirk helps drive that point home. He is shown disheveled, with messed up hair and a five o’clock shadow. He is thin and is not wearing shoes.

The one complaint I have is the depiction of Batman himself. He is shown thin, and his first appearance in the story looks cartoony at best, which I believe does not fit the tone of this story. I do like the close-ups of Batman’s face when he is with Langstrom after the robbery. There is definitely a contrast with the disheveled Langstrom. Batman is shown calm with no stubble.

I do find the characterization of Langstrom here to be fascinating. He is definitely depicted as an addict. That is shown by his lashing out at Francine in the beginning of the issue. He looks to be a man in denial. He thinks he can do good as Man-Bat, despite Batman telling him differently.

I find it interesting that the two personas of Langstrom and the beast are distinct yet they are combined. In the transport, Langstrom has a conversation with Man-Bat in his mind and as a result, is able to transform without the serum. This may be a nod to the Hulk over at Marvel.

It makes sense that the Suicide Squad will be called in to bring in Man-Bat. Most of the Squad are Batman villains anyway. I suspect that Waller wants to add Man-Bat to her team, and that is why she’s sending in the squad. It is always more that meets the eye when Amanda Waller is involved.

This is an entertaining issue, and I particularly liked the exploration of Kirk Langstrom as an addict in this story. The biggest gripe is the visual depiction of Batman. It's inconsistent, and in some instances, downright cartoony. But overall a solid start to the series.