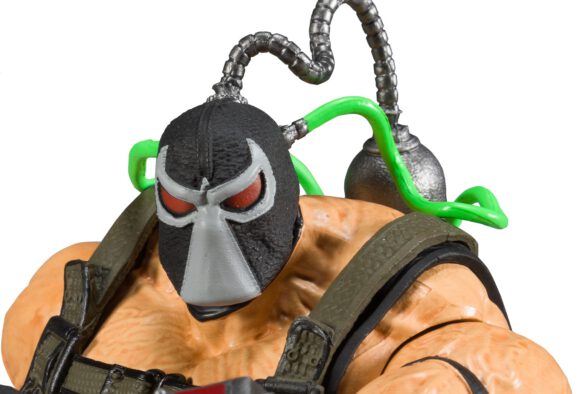 Another new figure is coming from McFarlane Toys as part of the DC Multiverse line, with the latest being a Megafig of the classic version of Bane. The figure comes in the scale of the seven-inch figures, but stands over eight inches tall. It also includes twenty-two points of articulation, a standard display base, and a collector card. The figure is priced at $39.99 and is expected to ship in September 2022. You can preorder the figure now at Entertainment Earth or Amazon.

Born on the island of Santa Prisca, the boy who would become Bane was raised within the confines of his nation’s cruelest prison, where he honed his mind by reading any books he could get his hands on. After decades of imprisonment, he was chosen for an experiment testing a super-steroid called Venom. Not only did Venom work, but it also gave Bane the strength to escape. He then set his sights on Gotham City—a place of which he had heard many legends—with one goal in mind: break Batman.

Product Features: Megafigs are large figures to match their 7” scale figure counterparts based on the DC Multiverse. Designed with Ultra Articulation with up to 22 moving parts for a full range of posing and play. Bane is featured in his iconic classic look. Bane includes a base. Included collectible art card with figure photography on the front and character biography on the back. Collect all McFarlane Toys DC Multiverse Figures.