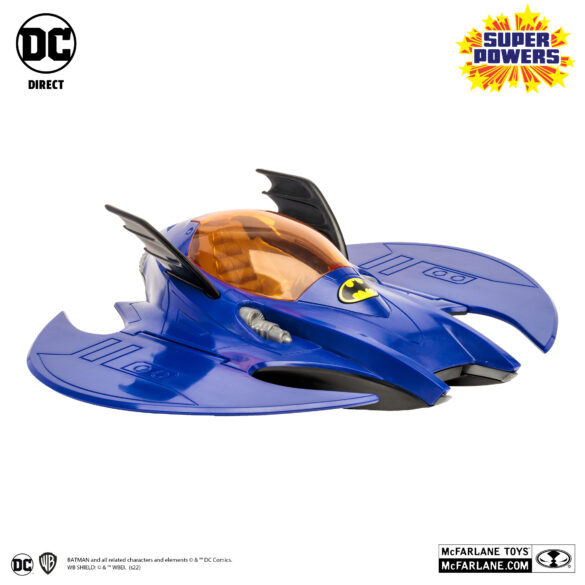 About a month ago, McFarlane Toys hinted at the return of the DC Super Powers line with Batman and the Batwing being part of it. At the time, there was little information known other than the line would be exclusive to Walmart and harken back to the DC Super Powers line from Kenner from the 1980s. The items in the line started to pop up in stores, but now they can finally be ordered online.

The first wave from the line includes Batman, Superman, and Darkseid. There are also two vehicles in the line, including the Batwing and Superman’s Supermobile. Given the previous popularity of the DC Retro line, which happens to be exclusive to Target, this new line seems to be the answer to evening the collectible playing field for the two major retailers. Details for the two Batman Universe items can be found below, along with pricing and preorder information. These items are in stores and online now.

Product Features: Continuing the legacy of the DC Super Powers line of the 80s comes a brand new batch of your favorite heroes and villains in the classic nostalgia series we all love. Classic 4″ scale Super Powers Figures with 5 points of articulation. Batman is featured in his look from Batman: Hush. Comes packaged in iconic Super Powers blister card packaging with updated artwork and logos reflecting your favorite characters. Collect all McFarlane Toys Super Powers Figures.

A unique creation by McFarlane Toys, this Batwing vehicle adds to Batman’s roster of flying vehicles to navigate Gotham and fight crime.

Product Features: Continuing the legacy of the DC Super Powers line of the 80s comes a brand new batch of your favorite heroes and villains in the classic nostalgia series we all love. Compatible vehicles to go alongside the DC Super Powers Line that fit both new and old figures. The Batwing comes with a moving front pincer claw, foldable wings, and a cockpit that opens when you press the Bat symbol. The vehicle is showcased in DC Super Powers-themed closed box packaging. Collect all McFarlane Toys Super Powers Figures and Vehicles.