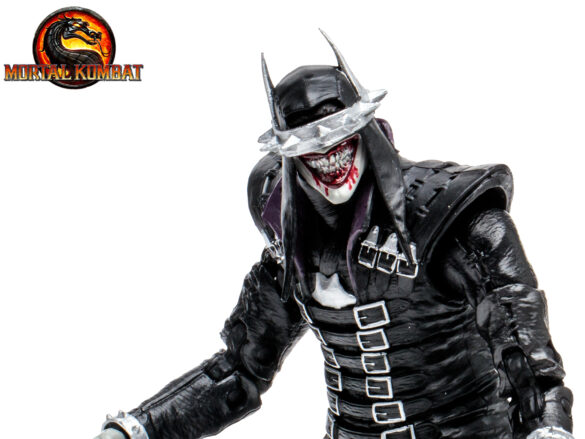 McFarlane Toys has released details for their latest Mortal Kombat 11 figures which includes the Batman Who Laughs. The seven-inch figure appears as he appeared in the video game and includes a curved blade, a display base, and a collectible card. It is priced at $19.99 and is expected to ship in November 2022. You can preorder the figure through Entertainment Earth or Amazon.

Born from the nightmares of the Dark Multiverse, the Batman Who Laughs is a hybrid version of Batman and The Joker from Earth-22. This twisted version of Batman was created when nanotoxins from The Joker’s heart were released into Bruce Wayne’s bloodstream, causing the Dark Knight’s perfect mind to merge with the warped psyche of the Clown Prince of Crime. Now he is thrust into the world of Mortal Kombat, where he will fight for supremacy against all Kombatants.

Product Features: Incredibly detailed 7” scale figure based on the Mortal Kombat Franchise. Designed with Ultra Articulation with up to 22 moving parts for a full range of posing. The Batman Who Laughs is featured in his look from Mortal Kombat 11. Includes curved blade accessory. Showcased in Mortal Kombat-themed window box packaging. Collect all additional McFarlane Toys Mortal Kombat Figures.