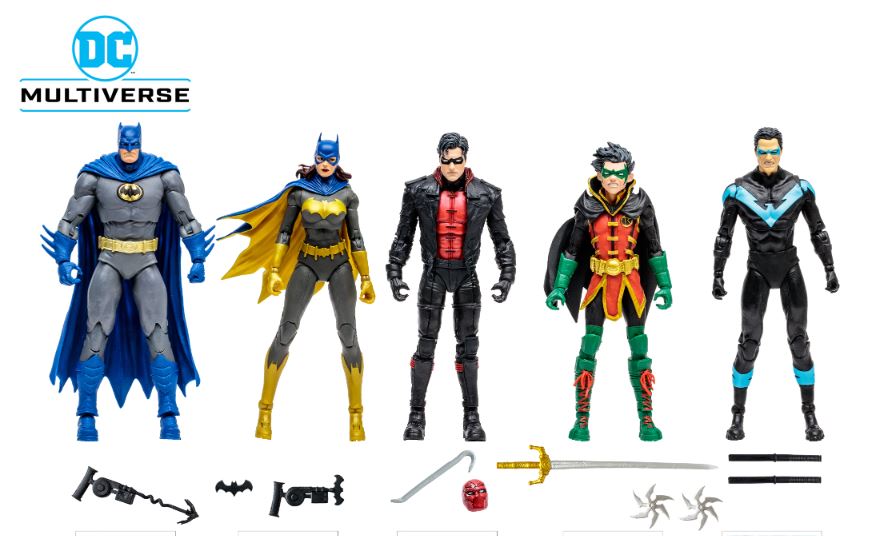 McFarlane Toys has announced a new Gold Label series release with an exclusive five-pack of action figures featuring the Batman family. The set includes Batman, Batgirl, Robin (Damian Wayne), Nightwing, and Red Hood. All of the figures are versions that have previously been released but now with specific details altered. Batman, Batgirl, and Red Hood all come with new color schemes, while Robin and Nightwing sport new heads, among other minor differences. The set includes collector cards, standard display stands, and accessories. It is priced at $99 and is expected to ship in October 2022. You can preorder the set exclusively through Amazon now.

Batman: As a child, Bruce Wayne™ watched as his parents were brutally killed in Gotham City’s Crime Alley. Traumatized by their deaths, he devoted his life to becoming the world’s greatest weapon against crime—the Batman! To become the ultimate vigilante, the Dark Knight™ disciplined his mind and body to reach the pinnacle of mental and physical superiority in his relentless pursuit of justice!

Robin: When Batman™ finds out that he and Talia al Ghul™, daughter of Ra’s al Ghul™, fathered a son, Damian, the Dark Knight™ takes the young boy under his wing and gives him a new home. Soon after, Damian Wayne™ becomes the newest Robin™—the Dark Knight’s protégé and crime-fighting partner. More than just a sidekick, Robin is an accomplished acrobat, a skilled fighter, and a sharp detective in his own right. Through rigorous and constant training, Robin maintains his physical edge, which, along with his knowledge of martial arts, makes him a formidable match for even the most experienced criminals.

Batgirl: By day, Barbara Gordon™ is the bookish daughter of the Gotham City™ Police Commissioner, Jim Gordon™. By night, Barbara dons a cape and cowl as Batgirl, committed to justice like her father. While her Utility Belt™ is equipped with Batarangs™ and other crime-fighting gadgets, her greatest tools are her brilliant mind and her unwavering determination. Batgirl is an expert martial artist and gymnast, trained in part by Batman™, who’s extremely athletic and agile. Her eidetic memory, heightened intelligence, and advanced knowledge of computers makes her a natural leader and skilled crime fighter.

Nightwing: Dick Grayson™ began his crime-fighting career as the original Robin™ —Batman’s™ protégé and crime-fighting partner. An expert acrobat and skilled fighter, Dick eventually left the nest and ventured out on his own as a new hero called Nightwing. His childhood experiences as a circus acrobat and trapeze artist make him extremely agile. He is a superior fighter and a highly skilled martial artist who has been personally trained by Batman. Nightwing is a keen detective, a natural leader, and a strategist with advanced knowledge of a variety of technologies.

Red Hood: Red Hood™ is a name and identity that has been used by various heroes and villains over the years. The current and best-known Red Hood is Jason Todd™, a fierce hand-to-hand combatant and vigilante crime-fighter who was once Batman’s™ second heroic apprentice called Robin™. He has a complicated relationship with both his former mentor, Batman, and the original Robin, Dick Grayson™.