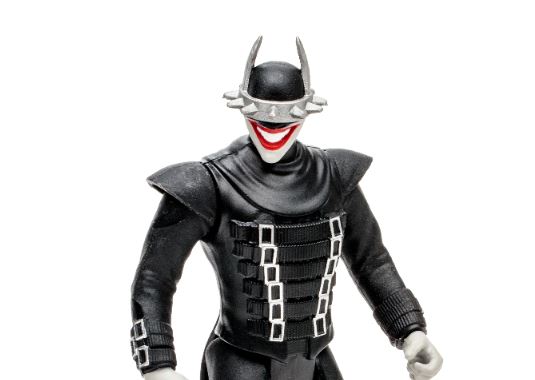 McFarlane Toys has announced a new figure as part of the Super Powers line, which features the Batman Who Laughs in a classic eighties action figure format. The figure measures about five inches tall and features five points of articulation. The figure is priced at $9.99 and is available now. You can order it exclusively through Walmart now.

Born from the nightmares of the Dark Multiverse™, the Batman Who Laughs™ is a hybrid version of the Batman™ and The Joker™ from Earth-22™.

Product Features: Continuing the legacy of the DC Super Powers line of the 80s, comes a brand new batch of your favorite heroes and villains in the classic nostalgia series we all love. Classic 4″ scale Super Powers Figures with 5 points of Articulation. The Batman Who Laughs is featured in his Dark Nights Metal look. Comes packaged in iconic Super Powers blister card packaging with updated artwork and logos reflecting your favorite characters. Collect all McFarlane Toys Super Powers Figures.