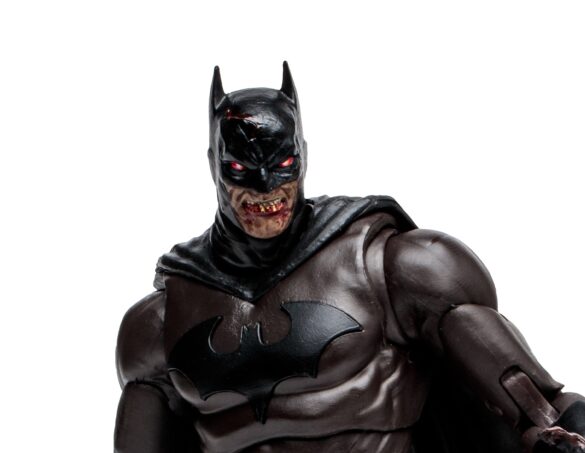 McFarlane Toys has announced a new Gold Label figure as part of the DC Multiverse line, which features Batman based on his appearance in the comic series DC vs Vampires. The seven-inch scale figure includes an ax, a display stand, and a collector card. It is priced at $19.99 and is expected to ship in early 2023. The figure will be exclusive to Walmart, but it does not appear to be available for order online and may only be found in stores.

As a child, Bruce Wayne watched as his parents were brutally killed in Gotham City’s Crime Alley. Traumatized by their deaths, he devoted his life to becoming the world’s greatest weapon against crime—the Batman! He’s a master detective and an expert martial artist, but his greatest weapon is his mind. Batman has a plan for every occasion, as well as high-tech weapons, gadgets, and vehicles to assist him in his relentless pursuit of justice!

Product Features: Incredibly detailed 7” scale figure based on the DC Multiverse. Designed with Ultra Articulation with up to 22 moving parts for a full range of posing and play. Batman is featured in his Vampire look from the Batman: DC VS Vampires comic. Batman includes an axe accessory. Included collectible art card with figure photography on the front and character biography on the back. Collect all McFarlane Toys DC Multiverse Figures.