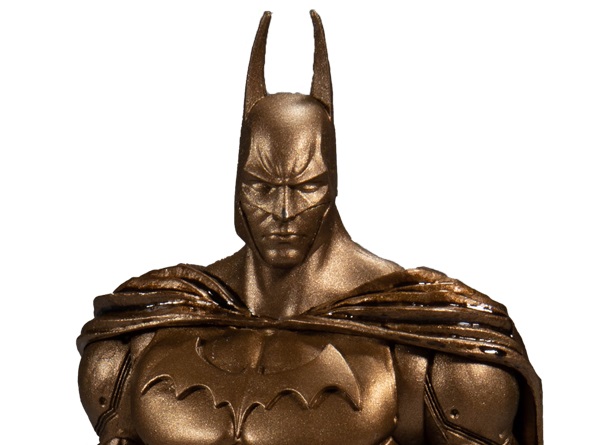 McFarlane Toys announced the launch of bronze chase figures during Comic Con this year, and we have already seen Joker from Batman: Arkham Asylum get the bronze treatment. Now they have released details for their latest chase figure which will be the Batman from Batman: Arkham Asylum. This variant will include all of the same accessories as the original figure but in a bronze finish. It is priced at $39.99 as a Walmart exclusive. There is no word on the release or ship date, but you can preorder the figure directly at Walmart. When his parents were gunned down in front of him, young Bruce Wayne resolved to rid Gotham City of the criminal element that took their lives. He trained extensively to achieve mental and physical perfection, in addition to mastering martial arts, detective techniques, and criminal psychology. Dressing as a bat to prey on criminals’ fears, Batman fights crime with the aid of specialized gadgets and vehicles, operating out of his secretive Batcave below Wayne Manor. Batman figure based on the video game Batman: Arkham Asylum. Batman accessories include Grapnel Launcher, open Batarang, folded Batarang, Bomb Cannister, and base. The figure is featured in an all bronze finish. Included collectible art card with Batman: Arkham Asylum artwork on the front, and character biography on the back. Collect additional Wave 2 Batman: Arkham Asylum; The Joker as well as other McFarlane Toys DC Multiverse figures. Figures sold separately.