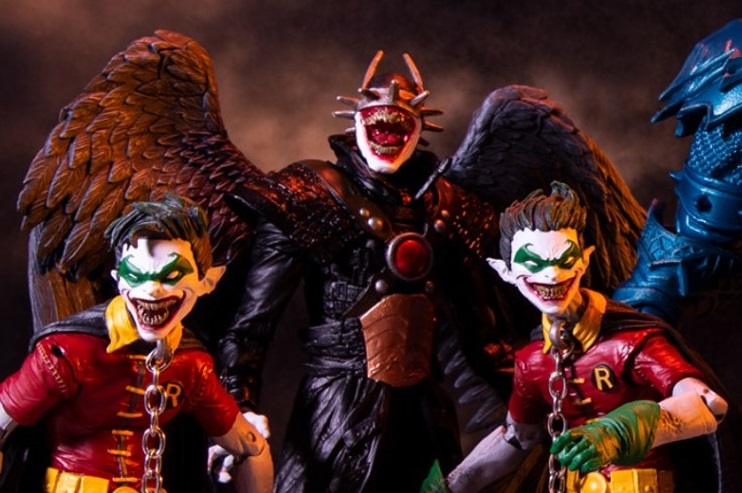 The virtual San Diego Comic Con is underway and McFarlane Toys has announced some of the items that will be making their way to stores this fall, and there are a few new TBU items.

The first group will continue the Dark Nights: Metal collection as seen in an earlier wave this year. This time around, the wave will be a Build-a-Fig for the Merciless. The figures included will be Robin from Earth-22 (with three head sculpts to collect), Superman (The Infected), Batman (Dark Nights: Metal), and The Batman Who Laughs (with Sky Tyrant wings). That would leave the Drowned and Red Death as the remaining figures to round out Dark Nights: Metal.

But then that brings us to the next group which will be two-packs. The first is the Flash vs Red Death which means, the Drowned is the last remaining character from the Dark Nights: Metal series that does not have a release. Meanwhile the second two-pack features Red Hood vs Nightwing (red suit). Next up, there are two new figures coming from Batman: Arkham Origins. Both Batman and Deathstroke from the game will be represented. After that, there is a bit of a mixed bag. In what appears to be characters from multiple areas of the DC Multiverse, we will see Cyborg (Teen Titans animated series), Azrael (Batman: Curse of the White Knight), Joker (Rebirth), and Flash (Rebirth). There will also be a Flashpoint Batman released as well as chase figures for the Joker (Batman: Arkham Asylum) and what appears to be the Batman: Arkham Origins Deathstroke.

So if you pay attention to what has released up to this point and what is coming, it is a safe bet that every year will see multiple figures from the comics, video games, animated shows, and the current films releasing. The number of figures seems to be growing which means the line must be at a certain level of success. With retailer exclusive lines already planned, we expect more exclusives as the DC Multiverse line continues. What do you think of all of the newly announced figures?