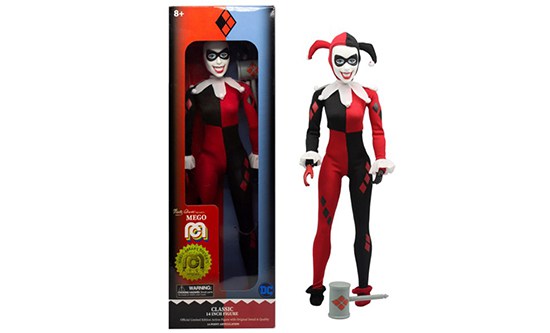 This is big news, Bat-fans! And by big, do I mean mega? Nope, I mean Mego!  That’s right, Megos are returning, exclusively at Target stores.  The beloved brand from yesteryear is making a comeback. The line will return with favorites from Star Trek, DC Comics, Action Jackson, and I Dream of Jeannie. And while only one of those relates to The Batman Universe, one of the first revealed figures is of Harley Quinn. Each figure will have a unique serial number and be produced in a limited run of 10,000. The line will feature 8-inch figures, 14-inch figures, and 8-inch figure 2-pack dioramas. Target’s exclusive line of Mego collectibles will be available in stores and online July 29 at prices ranging from $14.99 to $29.99.

The return of Mego will be celebrated with the full line being revealed at Comic Con next week before going on sale at Target.