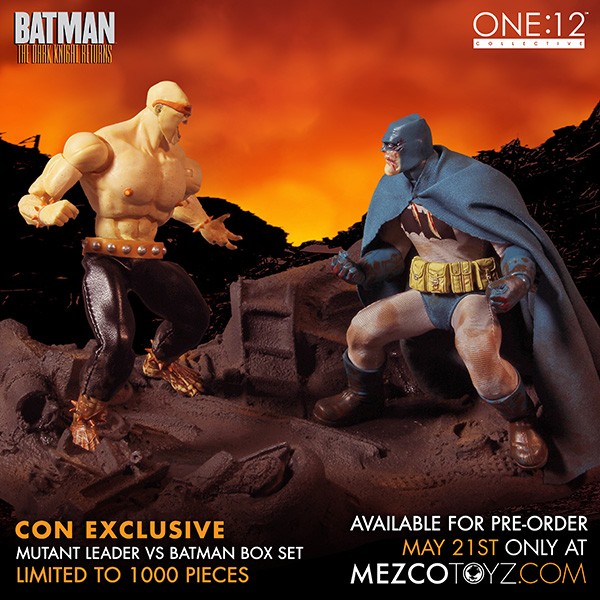 Mezco has revealed one of their exclusive for Comic Con International this year. It is a limited edition box set that features the famous scene from The Dark Knight Returns of Batman fighting the mutant leader. The set will be available for pre-order tomorrow for $150 and a limited number of the sets will be available at their booth at Comic Con.

Depicting the epic first encounter between Batman and The Mutant Leader in one of comicdom’s most infamous battles, this boxed set includes both a battle damaged exclusive Batman, an exclusive deco variant Mutant Leader, and a polystone display base of the Gotham City Junk Yard which became the battle field for these two titans.

The Deluxe Boxed Set contains:
– Battle Damaged Batman figure with an exclusive head sculpt, torn exclusive variant costume, alternate hands and exclusive “Knock-Out Foam” accessory designed to fit over his enemy’s face.
– Exclusive “first look” Mutant Leader with a variant dirtied up paint application to enhance the realistic battle in the junk yard, alternate hands and crowbar accessory.
– A Polystone cold casted display base of the Gotham City Junk Yard, over 10 inches long with felt footing.
– Packed in a large, closed box with a specially die-cut slip cover and utilizing the One:12 Collective’s collector friendly no- twist-tie packing method for easy in and out of box displaying.

Each figure is built on a One:12 crafted body featuring over 30 points of articulation with specially tailored cloth costuming, intricate hand painted decoration and state of the art solid construction.

Pre-Order available 5/21/2015 and for sale at the Mezco booth 3445 at San Diego Comic Con while supplies last.