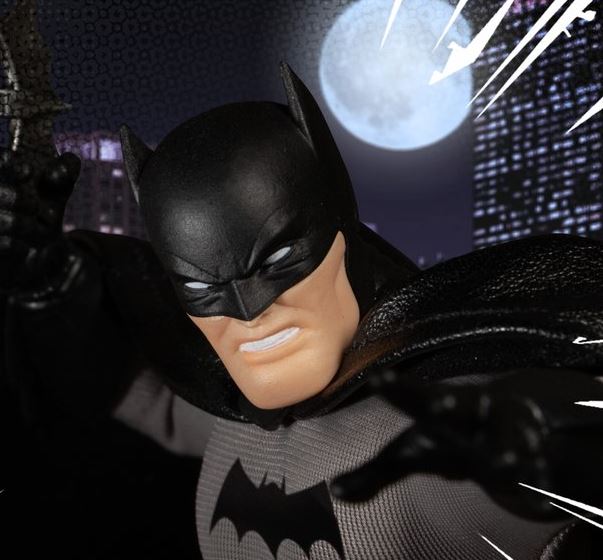 Mezco Toyz has released details for their latest One:12 Collective Figure, which features Batman based on his appearance during the Golden Age. The “Caped Crusader Edition” figure is a one-twelfth scale and measures about seven inches tall. It features over twenty-eight points of articulation and comes with multiple interchangeable hands, heads, and accessories. The figure is priced at $95 and is expected to ship between September and October 2022. You can preorder the figure exclusively at Mezco Toyz.

Gotham City’s Caped Crusader springs into action as the criminals of Gotham City run rampant! A burglary at the Gotham City Museum, a hostage situation at the courthouse, and an explosion at the chemical processing plant. Can Batman keep the people of Gotham safe?

Batman wears a Golden Age-inspired Bat Suit with a bat insignia, integrated posing wire in his cape, and a utility belt that houses his two-way Bat-radio. Five head portraits are included, with one unmasked ‘Bruce Wayne’ portrait, as well as a mask that he can hold in his hands or over his shoulders.

The Dark Knight comes equipped with loads of crime-fighting equipment, including two Bat bolas, a variety of Batarangs, a two-way Bat-radio belt buckle that attaches to his belt, a Rebreather breathing apparatus, and more.

THE ONE:12 COLLECTIVE BATMAN FEATURES:

Each One:12 Collective Golden Age Batman: Caped Crusader Edition is packaged in a collector-friendly box, designed with collectors in mind.