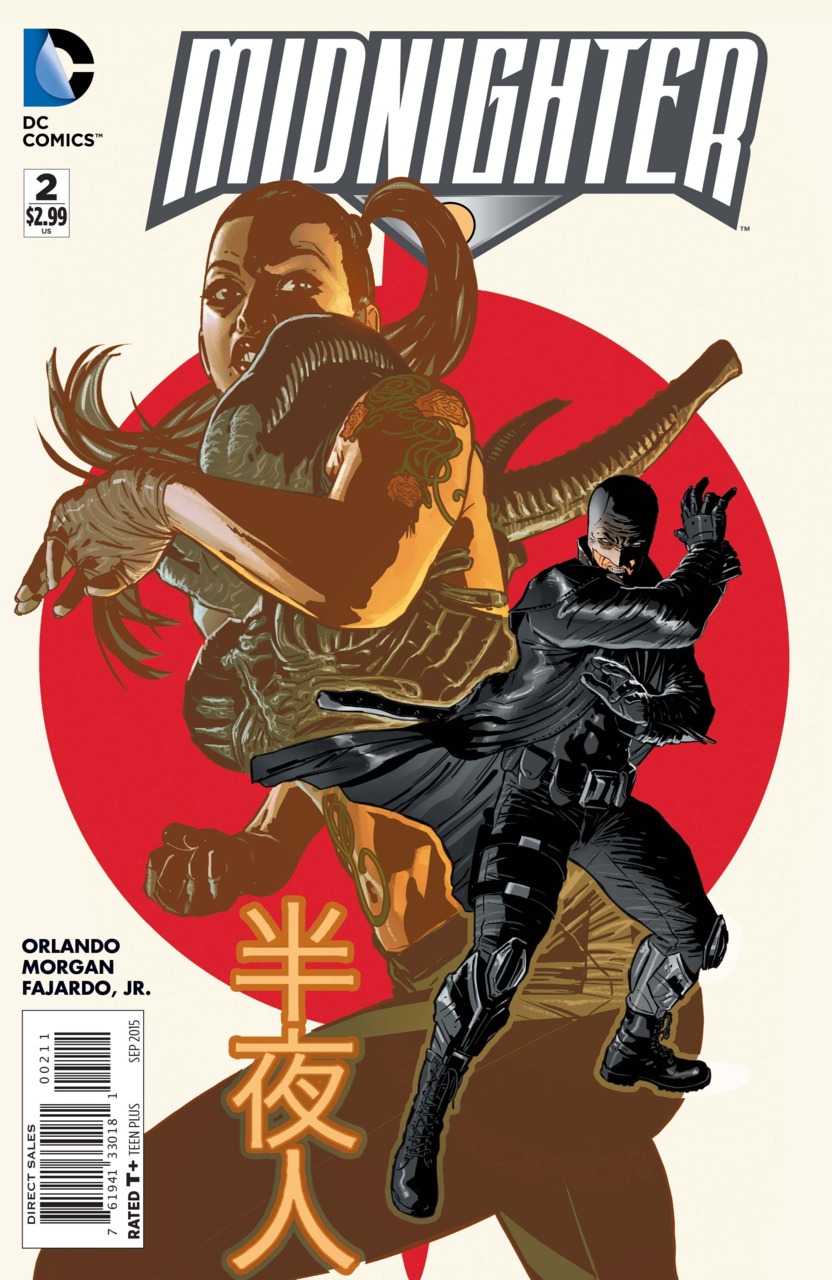 The theft of the God Garden tech takes a dangerous turn in Midnighter #2.

In Oakland, Marina is upset about the death of her husband, Pat. Pat’s death was caused by an allergic reaction to a Windcrest Foods product. A mysterious figure urges Marina to punish Windcrest foods. He gives Marina what looks like a Giger inspired corset from the God Garden which will give her the power to pursue her revenge.

Meanwhile in Boston, Midnighter is playing pool with Tony when he gets a call and has to rush off.

Back in Oakland, Marina is making her way through Windcrest Foods headquarters. The body appliance she is wearing gives her access to the Six Killing Sounds which she is using against the building’s security team and janitorial staff. She is working her way to the boardroom when Midnighter shows up to stop her. Marina uses the killing sounds to disable Midnighter and make her way to confront the board of the food company.

As she impresses upon the Windcrest Board the value of corporate responsibility, Midnighter wakes up and punches both of his ears apparently deafening himself so the Killing Words will have no effect on him. He then makes his way up to the Boadroom and crashes through the window giving Marina a good kick in the head.

The story skips to the next day in Moscow. Midnighter is on a date with Matt, one of the people he saved in the restaurant in Midnighter #1. The two are confronted by a group of locals who are none too pleased with having to share the restaurant with a pair of gay men. Midnighter violently impresses the advantages of tolerance upon them.

After the fight, Midnighter tells Matt about Marina and the God Garden tech that was stolen. We flash back to the point of the story the day before where Midnighter just crashed through the Windcrest Foods window and kicked Marina in the head. Marina tells him why she is seeking vengeance. While he has disabled Marina he also breaks the hand of one of the board members. He tells them that they will seek the minimum sentence against Marina and also take responsibility for the damage their food problems have caused, or else!

Back in Moscow with Matt the two are eating barbeque and talking about Andrew, Midnighter’s ex. Midnighter remembers the situation with Andrew months before in Opal City when he and Andrew broke up.

In Marina’s prison she and Midnighter are talking using the communication tech he has apparently given her. Midnighter is on the hunt for human traffickers and wants information on the guy that gave her the God Garden tech. She didn’t see his face so can’t be of much help. Suddenly, Midnighter is excited to find himself confronting a couple dozen guys in Tron suits who look ready for a fight.

First off, I really like the way they are developing the character of Midnighter. He is 100% yang and gleefully ready for trouble at all times. He is also very happy to exact justice even on people he is saving like the board members of the food company. Also, the story here is interesting. Marina has to be talked into attacking Windcrest by the shadowy God Garden thief but does so with aplomb. She hasn’t lost her humanity however and though chastened by her capture she seems willing to help find the tech robber.

I don’t like how the story jumps around in time every couple of pages or so. The fight in the boardroom is split by the story of Midnighter’s and Matt’s date in Moscow which is usurped by the story of the breakup with Andrew.

Also, the art is not as clear or as inventive as in Midnighter #1. The characters are not as clearly drawn as I would like although the action scenes are done with a dramatic and kinetic style. Also there are some inconsistencies between scenes with how Midnighter looks. For example, in Moscow his hair is brown but in the scenes with Andrew his hair is black. Overall he doesn’t look like the same guy and you have to look for clues to figure out who is who.

In any event, Midnighter is still one of my favorite current comics. I am hopeful that the timeline bouncing in this issue is just a one-off experiment. It wasn’t done in #1 so there isn’t a reason to believe that it is a motif that is inherent to the storytelling. I look forward to #3 and also to find out who stole the God Garden tech and why.