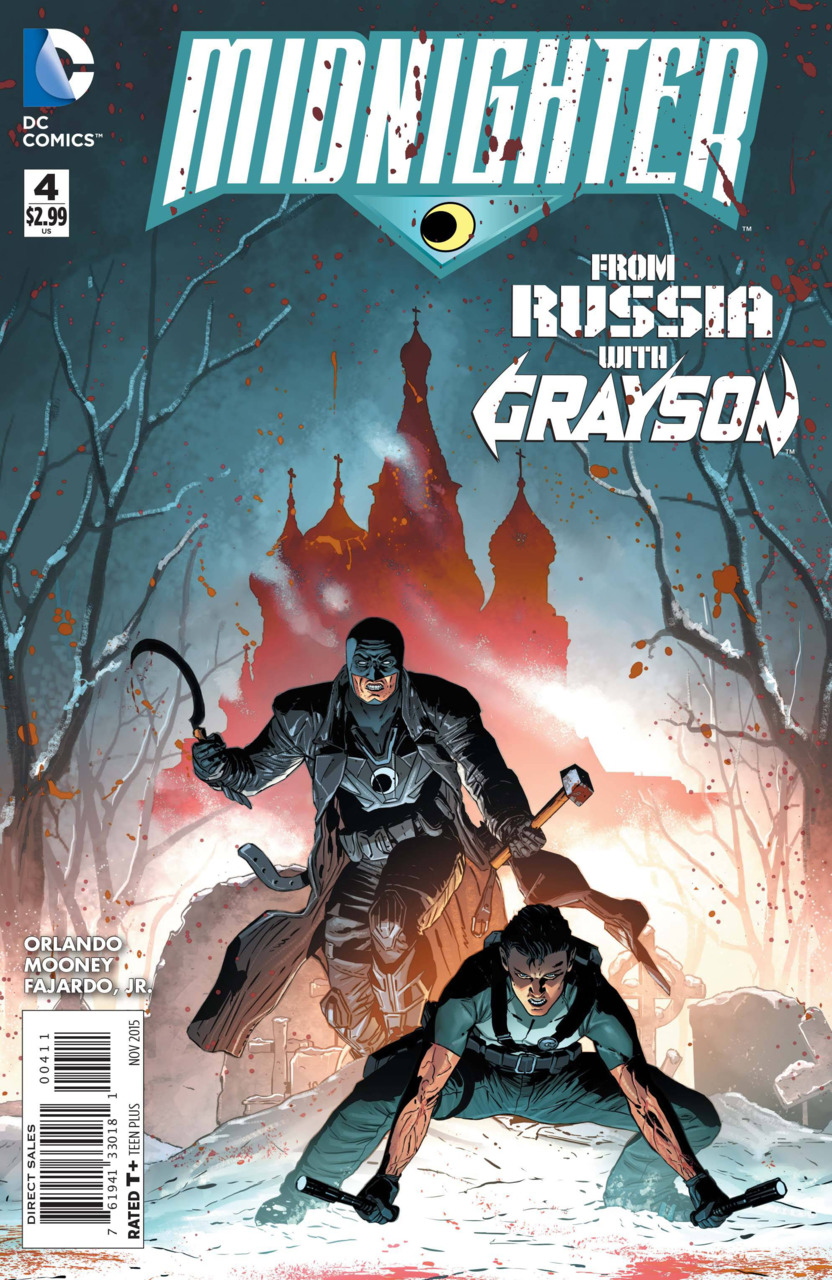 Midnighter joins up with Dick Grayson as he continues his search for the God Garden tech thief. The Disfunctional Duo battle creatures out of folklore created by science in Midnighter #4.

Spoilers of the night, what beautiful music they make below….

Dateline Moscow. A group of young douchey pals are drinking in the back of a cab on their way to some kind of special event. They arrive at a lonely part of the city and enter a dilapidated building. They are buzzed into the building interior by the old woman at the door. Inside the guys are greeted by an elegant man and escorted into a modern looking office building. Trapped and tied up is a ghoulish looking creature, a Vampire who is pleading for his miserable life.

One of the guys grabs a stake and kills the poor creature and the friends high five each other and call the staker a hero.

Meanwhile in another part of Moscow, Midnighter and Dick Grayson are sharing a meal and coffee with one of Midnighter’s informers. Midnighter kidnapped Dick at the end of the last issue, but Grayson seems to be alright with it. They get the information they are looking for from the Russian and head off.

Midnighter and Dick find the three Vampire killing pals in a steam room and lean on them for information about the location of their fiendish adventures. The guys resist which, predictably, doesn’t go well for them.

That evening the elegant man from the Undead Dead Zone finds a homeless man and offers him a place to stay warm. Once in his building, the man bites the homeless fellow and turns him into a Vampire.

Midnighter and Dick are reconnoitering the evil establishment and after seeing some businessmen enter they decide to go in themselves. They sweet talk the lady at the front desk and enter ready for a fight. Seeing this, the businessmen head for the door while our heroes are attacked by the house security who are in weird costumes. They make short work of the crew but Midnighter is grabbed by the Elegant Vampire in spirit form who crashes him through the ceiling to the roof of the building. It turns out that the fiend is not a real Vampire but an amazing God Garden tech simulation. The spectre threatens Midnighter who takes it all in stride before he lays a brutal knee to the face. The creature turns into a plague of rats which Midnighter delights in smashing. Good times.

The Vamp reforms into a foggy mist and surrounds Midnighter when Dick breaks through the door with his gun at the ready. He warns Midnighter to look out behind him. Turning, Midnighter lays a lethal karate chop on the demon which separates the top of his head from the remaining portion of his body. Dick is aghast at Midnighter’s savagery but what’s a Midnighter gonna do?

Afterwords the pair try to help those that were unwillingly turned into Vampires with reverse gene therapy but sadly their DNA is booby trapped and they poor guys melt to death. Midnighter and Dick have a drink at the hotel bar where Dick says that he discovered the God Garden tech thief, Akakyevich’s, nanosignature from the DNA of the Vampires which can help Midnighter find him, get back the Tech as well as his origin file.

In Kazan, Russia three uniformed men are complaining to Akakyevich about the poor performance of his fighting men that Dick and Midnighter easily defeated. He watches a video of the fight with Midnighter mugging for the camera. Akakyevich says that he is going to create an army of soldiers that can see the future just like Midnighter.

It was great to see Midnighter and Dick together. It was a little confusing why Dick seemed so OK with being kidnapped, but the two worked well together. There was some playful homo eroticism with the two in the steam room and the occasional double entendre which was done in a light, playful way.

I did find the story a little disjointed and at times hard to follow. The dialogue didn’t flow very well although some of the back and forth between Midnighter and Dick was priceless. Stephen Mooney’s art, while perfectly serviceable, doesn’t have the same inventiveness that Aco’s did in #1 and #3.

So while I enjoyed this issue I’m a little disappointed because of how good it could have been. Admittedly, I have a high standard for this book. Still, the humor and playfulness of Midnighter and Dick needed to gel a little better as a story. I hope we see these two together again soon.