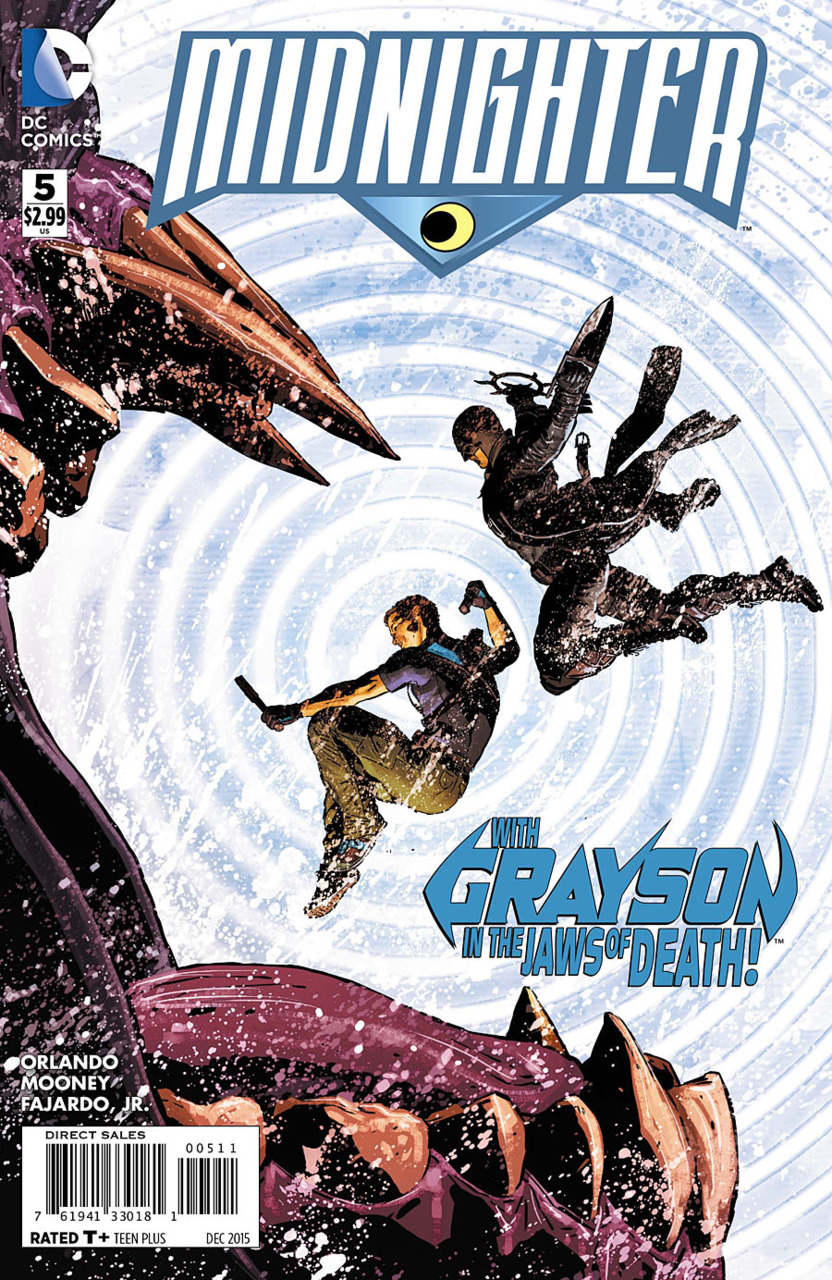 Midnighter and Dick Grayson continue their team up as they travel the globe in their hunt for the God Garden Tech thief in Midnighter #5.

Matt is jogging in Oakland with some friends and catching some flack for his inability to keep up. He is dating a superhero after all. His jogging buddies are also teasing him about the ancient Discman at his hip. Afterward he calls Midnighter who is in Kazan Russia and in the process of beating up some of Noi Akakyevitch’s goons. They have a pleasant conversation while Midnighter and Dick serve up some knuckle sandwiches.

Noi Akakyevitch travels from the arms of his girlfriend in Moscow to his lab in Kazan using the God Garden Door tech. The scientists in the lab are creating fearsome creatures using their stolen science. They are aware that their outside defenses are under attack by our heroes. Noi has expected and prepared for this.

Midnighter and Dick get ready for their assault on the lab. Since the stolen GG tech is able to block Midnighter’s magical door, he just looked for the place that he couldn’t teleport to and voila the lab must be there. Pretty solid thinking.

They travel to an unmapped and unused subway station. Midnighter inexplicably handcuffs himself and Dick together as they ride the subway and fight nasty beasties along the way. One particularly gruesome wolf-man-thingee requires both heroes working in concert to deliver the business end of a sword into the creatures neck.

Still cuffed together the Disfunctional Duo burst into Akakyevitch’s lab. Noi is expecting them and blasts them up out of the lab and onto the street. Dick starts to tease Midnighter about getting beat but this is apparently all part of the plan. Now Midnighter can access his GG Door tech which he uses to plant his boot on Akakyevitch’s face. Noi isn’t too happy about this but ends up with a severed spine for his trouble.

However, Akakyevitch tells our heroes that he is just a middleman, there is a bigger boss yet to kill. Who could it be?

Back at the hotel Midnighter and Dick have a drink in mutual admiration and crash for the night.

Back in Oakland, Midnighter arrives (through the door door, not the God Garden door) in time for a romantic Thanksgiving dinner with Matt. The two are enjoying their time together but outside in a helicopter a mysterious figure has their heads in his gun sights.

This is another solid but problematic entry in the story. I love having Midnighter and Dick together, they play off each other very well. I’m not sure why their relationship works but it sure does. Also, Midnighter’s relationship with Matt is very strong. Since Midnighter’s character is so clearly defined the interplay between characters (which is so often messed up) is done very well and has been for the whole of the series run. Props to Mr. Orlando for hitting the mark dead on here.

Where the book gets into trouble is in some of the storytelling details. Why did Midnighter handcuff himself to Dick? Why were they suddenly able to use the God Garden tech door? I’m sure there are perfectly good explanations for this that I would pick up if I only read the issue a few more times (and since I really like the series I’m sure I will). However, I would like the main action plot points to be a little clearer. I don’t mind if some of the nuance needs to be teased off the pages, but the main plot points should be clear. This has been a problem in a couple of recent issues and it continues.

Stephen Mooney’s art is interesting, if somewhat disjointed. I like the innovative ways the panels are arranged on some of the pages. We are hurled through the action sequences which then culminate in strong coup de grace pages. Sometimes though I feel like I’m hard pressed to know what Midnighter’s face actually looks like. It seems to change from sequence to sequence.

Those complaints being said, I do like this comic and will surely continue reading for as long as the quality stays high.