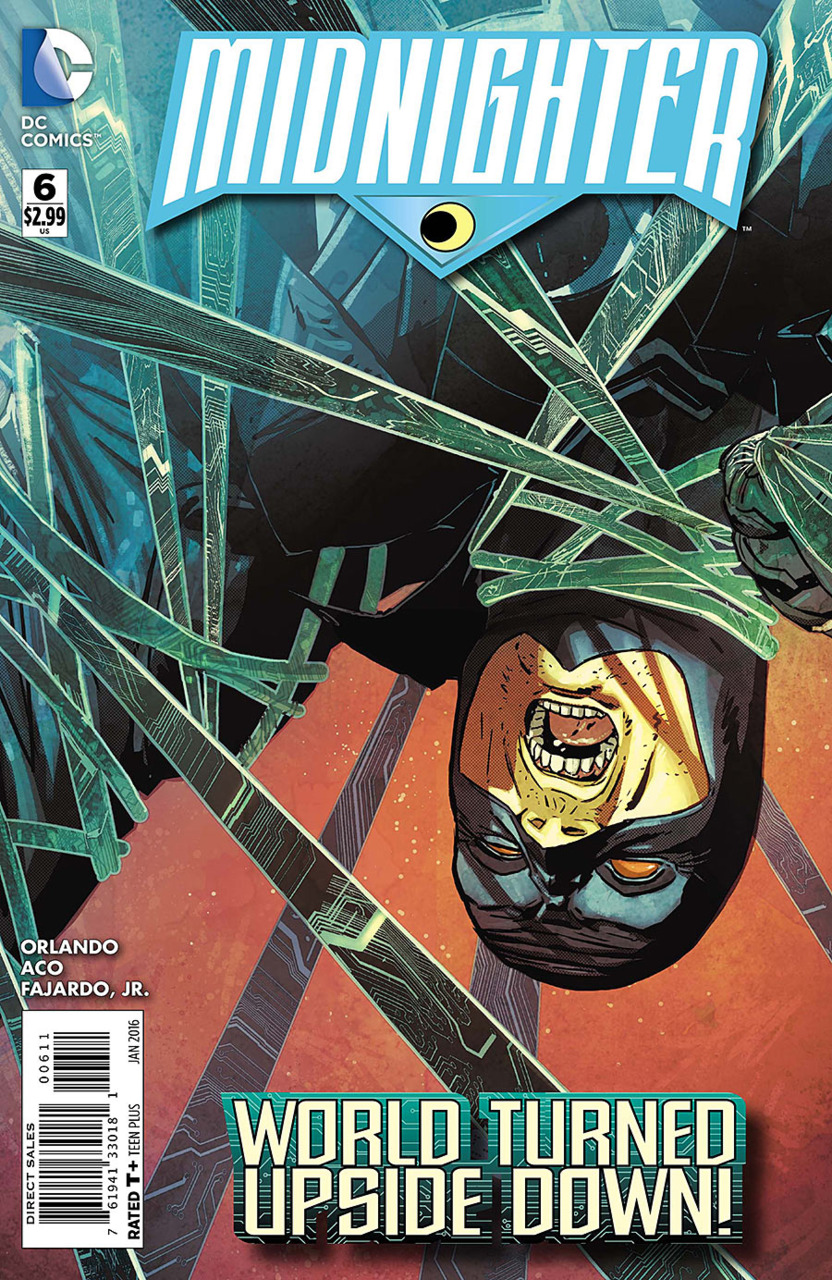 Following last month’s adventures of Grayson and Midnighter, writer Steve Orlando picks up this issue only moments after #5 concluded.

During their Thanksgiving meal, Matt, M’s boyfriend, is targeted by Multiplex. Midnighter leaps over the dinner table, tackling Matt into safety. In turn, Matt quickly and cleverly hands M the closest weapon-like item he could find: the meat pounder they used for their turkey.

Within two pages, Midnighter manages to climb into a helicopter outside his apartment building while simultaneously taking out the handful of Multiplex assassins that the helicopter was being flown by.

Since their apartment is in need of some major repairs and remodeling, Midnighter and Matt are left with no other option but to hit the road. A page-full of montages show M and Matt enjoying the outdoors, visiting with friends, and camping. Each of these destination spots wouldn’t have been complete without Midnighter kicking some ass, too.

The credit page shows us a blood-covered Midnighter casually landing the helicopter from the opening scene on the roof of his apartment building.

Orlando takes us forward shortly after the “Post-Apartment Attack and Remodeling Tour” were completed. M and Matt anxiously return to their apartment, worried as to how the remodel went. The scene ends with Matt receiving an alert on his phone indicating that his father had been attacked, seemingly because of his relation to Matt and Midnighter.

Take a few steps back to Day Five of the “Post-Apartment Attack and Remodeling Tour.” M and Matt are staying at a lake resort. After dialoguing about it, the two come to the conclusion that they should return to their apartment after they enjoy each others company a little while longer.

Again, we see a key conversation between Midnighter and Matt placed between a school bus-centered fight sequence involving a few punk rock-looking assassins. M and Matt’s dialogue also questions Midnighter’s ability to protect those whom he loves. Midnighter is puzzled because, for the first time, he can’t see what’s going to happen next. The bus sequence leaves Midnighter discovering that the God Garden has been using Holt-Griffen skin that he hasn’t been able to pick up on.

During the final scene sequence, Midnighter storms in to Matt’s father’s house, killing Matt’s seemingly father. Stunned out of his mind, Matt questions everything but shortly realizes that that was not his father. Midnighter comforts Matt by hugging him and offering an explanation.

We then see Midnighter falling to the floor holding his stomach as Matt walks away only to return in gray boots and a matching cape. The next page shows Matt stabbing Midnighter out of nowhere only moments before.

Having never read Midnighter nor any of Orlando, ACO, Petrus, or Fajardo Jr.’s previous works, I definitely felt lost and uncomfortable during my first read-and-a-half of the issue. In case you couldn’t tell, the story jumps around a lot.

To confuse me even more, the art adds another dimension of close-ups that jump around and zoom in on aspects of scenes that aren’t always included in the larger panel. In regards to the art, I highly recommend reading these issues either on the DC Comics app on Comixology because both contain click features that take the reader sequentially thru both speech bubbles and panels/closeups. Regardless, I found ACO’s penciling to be phenomenal. The detail and depth in scenes are very pleasing to look at. Inks and Colors by ACO, Petrus, and Fejardo Jr. also add a dimension of depth that I wish more comics would use. It both focuses on the main objects in each panel while offering a decent background.

Story-wise, I did not see the ending coming. I was shocked and blown away. Perhaps I needed to read back issues more closely to see twist. Having read this issue a few times now and a few of the previous issues, I think going forward I can approach issue #7 with the expectation that sequential order is in no way a given.