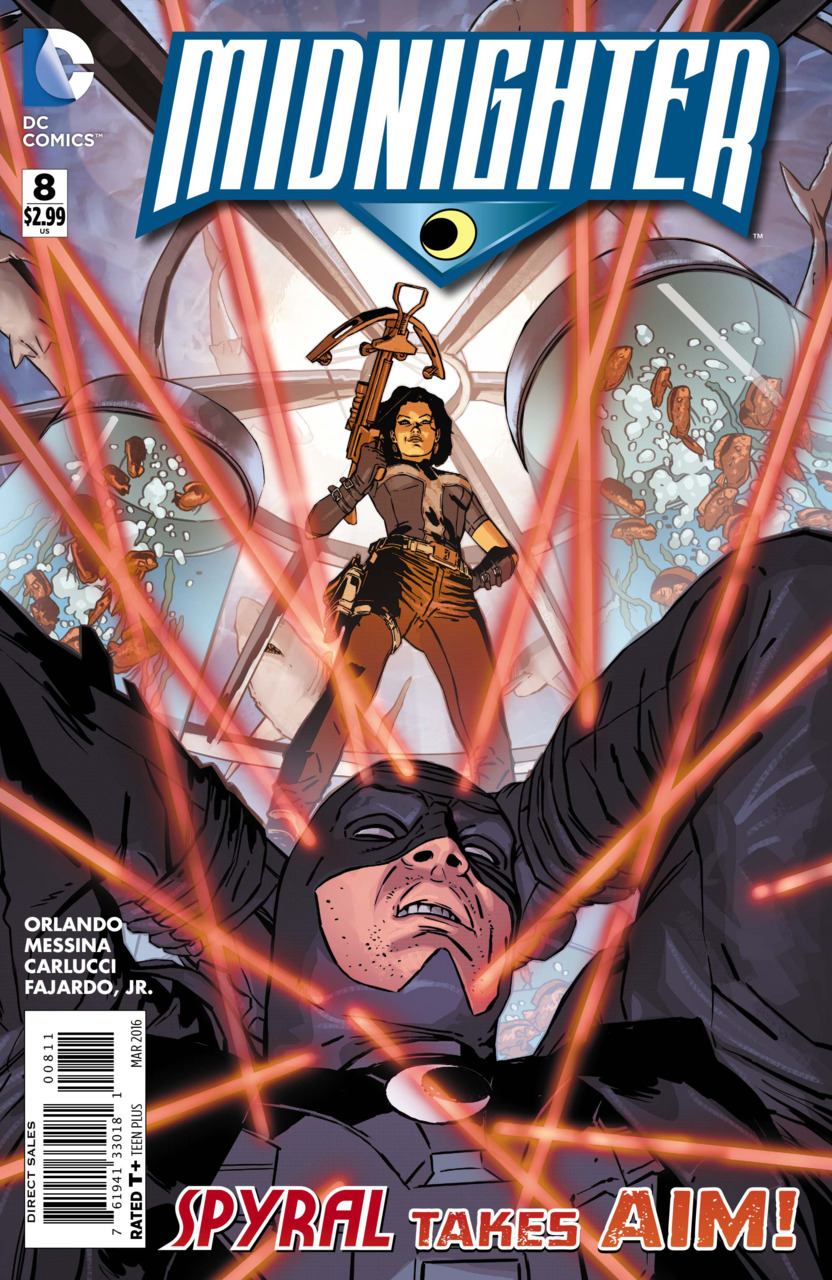 This essentially one-shot/filler issue picks up beneath the flower city in Rochester, New York. A gorilla-like animal with the horns of a rhino and the feet of a bird charges through the subway, tearing through one car. This strange being is quickly gunned down.

At the Greater Rochester International Airport, a mysterious Mr. Mndawe arrives to tie up some loose ends.

In Boston, Midnighter is talking through who he is and what’s happened to him over the last few months with a guy named Robert. While discussing these issues with Robert and eventually his wheel chair-laiden roommate Will, M receives a call from his boss regarding the animal this issue opened up with in Rochester. Midnighter kindly but immediately takes off to New York.

Just seconds before this conversation in Rochester, a man and woman seem to be hunting these animals, referred to as “chimera,” underground. One escapes, ripping through a street in downtown. Midnighter arrives just in time and attempts to take out this chimera with heavy car parts from a nearby crushed car. As M is about to go face-to-face with a chimera, Dominic Mndawe, otherwise known as Freedom Beast (first appeared in Grant Morrison’s Animal Man, arrives to prevent the fight. Mndawe explains to Midnighter that these beasts are not the enemy but the Sportsman’s Ambition are, an illegal hunt club.

Shortly after, M is following Freedom Beast and an elephant, that Mndawe can speak with telepathically, to a run-down train station. Freedom Beast and Midnighter break into a building where, attacking many of the workers who knew Mndawe. They release a towering spider on them but Midnighter quickly puts the spider to sleep. The two take on a man that Freedom Beast eventually combines with a fly leading him to be eaten by a bat.

M bluntly concludes the team-up with Freedom Beast and walks through his door to Bridgewater, Massachusetts, where he goes to pick up Marina Lucas as she’s being released from prison. Only moments later, he receives a call and has to go somewhere really quick.

He is tricked into a meeting with a lady named Susan and Matron Helena Bertinelli of Spyral. Helena thinsk she manipulates Midnighter into working for her to retrieve the perdition pistol (was stolen by Deadshot at the end of issue #7 for Amanda Waller). M counters, stating that he’ll work with her rather than for her.

The issue wraps up with Matron showing Midnighter images of the Suicide Squad (Parasite, Deadshot, Captain Boomerang and Harley Quinn), asking whether he recognizes any of the members or not.

While I normally enjoy David Messina’s pencils, I found his work here to be too clean and polished. Both in comparison to ACO’s pencils as well as to the tone of Midnighter as a whole, I think it’s fitting for the art to be a little more rugged and dirty. Combined with Messina’s pencils, Carlucci’s inks and Fajardo Jr.’s colors resemble more of Cartoon Network show than an issue in the current run of Midnighter.

These filler issues that buy a month’s time in between story arcs are often hit-or-miss. I enjoyed seeing a throwback character that we rarely see in Freedom Beast. However, the story was so-so. I’m assuming Orlando is a Grant Morrison fan considering he’s now used two of his original characters (Prometheus and now Freedom Beast). The last few pages are the best part tying the conclusion of the first arc to the next arc. I look forward to ACO’s returning to pencil in issue #9 as well.