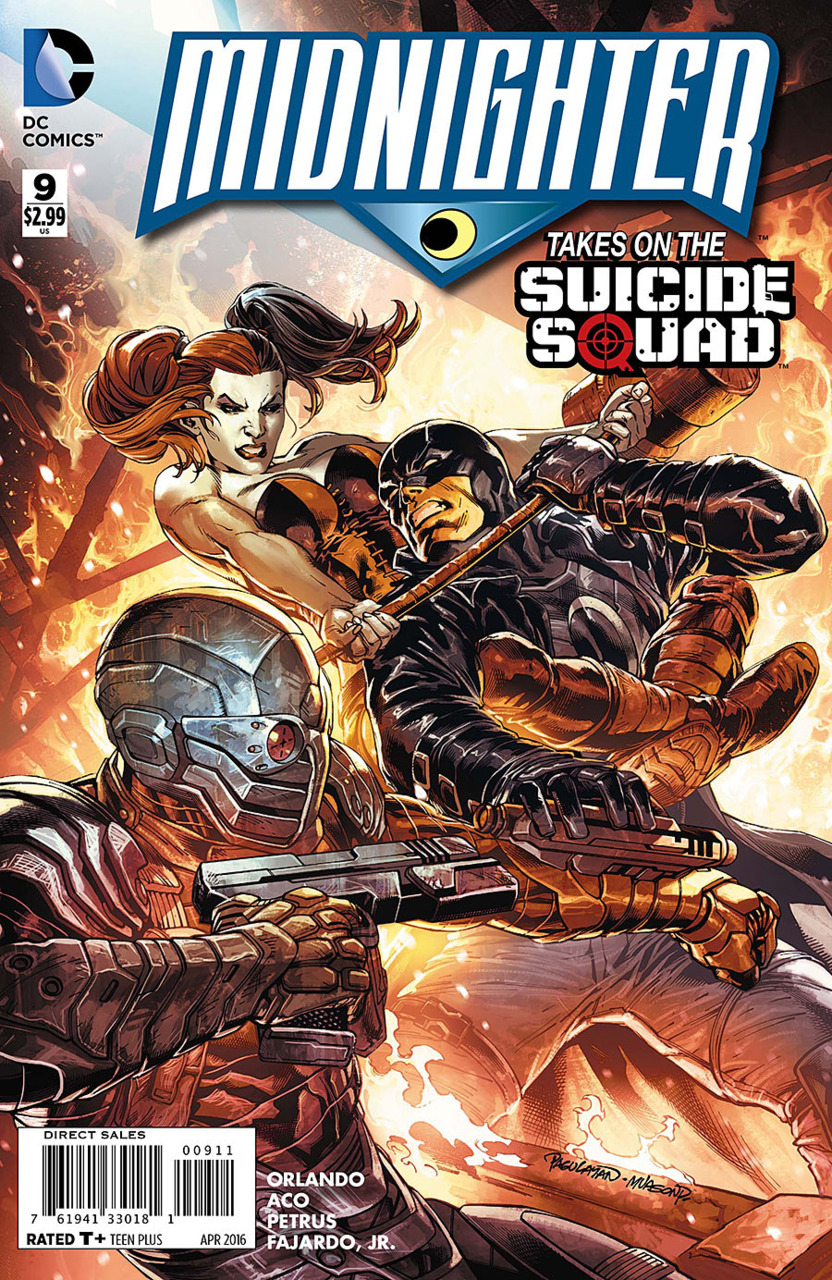 Synopsis: Midnighter takes on the Suicide Squad! Or does he?

This issue begins with Marina shipping M to the Crow’s Nest, a space station believed to be the site of the recently stolen perdition pistol by Task Force X. After crashing directly into the Crow’s Nest, Midnighter updates Marina that he’s in although he doesn’t enter unnoticed.

At Task Force X’s black site in the Arctic, Amanda Waller immediately notices Midnighter’s break in via video footage. She jokingly mocks M’s crow bar to herself while she is simultaneously interested in his potential next move.

As Midnighter finds the perdition pistol, a blue electric force encircles him prohibiting him from taking the pistol. M realizes that a person with super speed is guarding the pistol and is intrigued by the challenge to say the least. He explains to the speedster that, although he is without-a-doubt faster than him, all he needs is one second to take him down.

While calling Midnighter out, M rips the speedster’s achilles tendon with his crow bar. Only seconds later, he stabs him through his goggles seemingly leading to his death. Midnighter jumps out the space station and into a doorway but not without leaving a grenade and the perdition gun behind.

M lands in the room with Matron and shares with her Intel about Henry Bendix, a man whose information he discovered in the space station. Amanda Waller is apparently using him to complete a mysterious project. Matron demands Midnighter bring her his head.

In Boston, a young man is interviewing other people that have come across Midnighter for a documentary. The interview with M in particular is interrupted by a few members of the Suicide Squad (Deadshot, Harley Quinn, and new member Afterthought). Midnighter attempts to defend the filmmaker by taking on Afterthought. Harley Quinn briefly attacks the filmmaker but gives up shortly after. Deadshot doesn’t seem to do anything but stand there and look intense.

Afterthought stuns M by dodging his moves. Perplexed, Midnighter wants to know how he did this. Afterthought explains that due to scientific advancements in regards to his brain, he sees everything five seconds before everyone else. Essentially, he knows everything Midnighter will do before he does them and, in turn, is able to proactively combat him. The fight ends with Midnighter lying seemingly unconscious in the filmmakers arms as the Squad approaches them.

Art: I love ACO. I don’t know ACO but I love ACO. Coupled with Hugo Petrus as well as Romulo Fajardo Jr. taking lead on colors, the art is top-notch. The layouts can still be somewhat confusing for me but I appreciate the uniqueness and creative leap they’ve take with them.

The cover looks great! However, I find it odd that Deadshot’s guns that he’s holding on the cover are different than the guns in the actual issue.

Final Thoughts: I want to like this book. I really do. But to be honest, I can’t even read it all the way through in one sitting. I dread this book.

Perhaps my millennialized Netflix-brain has too short of an intention span. Or, perhaps this book isn’t for me.

Let me put it this way: if I wasn’t assigned to read this book by my editor, I would’ve stopped reading Midnighter a long time ago.

With that being said, I do think ACO’s art is phenomenal. I can’t stress that enough. If this book ever gets cut, I hope to God that DC locks ACO for another book.

Also, the cover’s claim that Midnighter “Takes on the Suicide Squad” is semi misleading. The two members of the Squad that the cover shows M fighting are basically bystanders used as a marketing ploy to boost this book’s measly sales. Instead, Midnighter really only fights the new and interesting member of Task Force X Afterhtought. Sadly, that’s exactly what he was in regards to cover representation.

Even more sadly, an after-thought is exactly what this book is becoming to me.